As Time Goes By

On the day after the Washington Capitals lost to the Philadelphia Flyers in Game 7 of the 2008 Conference Quarterfinals, we wrote:

"This team owes no one anything. Ask yourself, if you were sitting down to Thanksgiving dinner last November 22nd, and as you were taking turns giving thanks for your blessings, your crazy uncle said, “I’m thankful that we live in a town where the hockey team is going to make the playoffs,” would you have been tempted to file commitment papers?


They gave us one helluva ride…"

They were the fresh-faced overachievers – a rarity in the history of the franchise – whose future was laid out before them. It was the first step, we hoped, of a climb to the top, to a Stanley Cup championship.

Four years later, the summit still seems so far away. In fact, the Caps have been caught and passed by a number of other teams. If you look at the league standings for the 2007-2008 season, the Caps finished 12th overall among the 30 teams. But of the 18 teams finishing below them in the standings, seven have since advanced in the post-season at least as far as a conference final. Four advanced at least as far as a Stanley Cup final, and three teams – Chicago, Boston, and Los Angeles – have won a Stanley Cup: 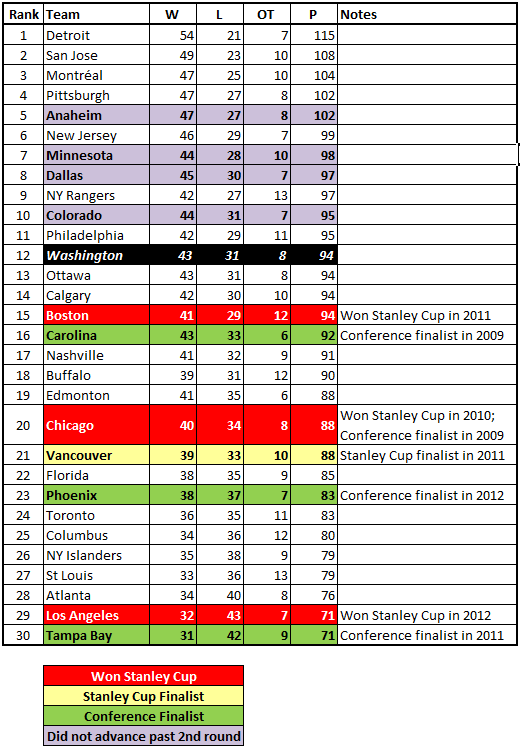 Looking at the teams that finished ahead of the Caps in that 2007-2008 season, seven of the 11 clubs have advanced at least once to a conference final. Only four – Anaheim, Minnesota, Dallas, and Colorado – have failed to do so.

This isn’t meant to belabor the point that the Caps can’t seem to advance past the second round. We have mentioned that from time to time over the years. But there is this notion that “anything can happen in the playoffs.” Well, no, at least not to the extent the phrase implies. In these five consecutive years that the Capitals have made the playoffs, it is true that the first round of the post-season is a free for all. Of the 30 teams in the NHL, 25 of them have at least appeared in the first round of the playoffs, and 20 different teams have advanced to the second round, including the Capitals (three times).

But just as cream rises to the top, so too do the best built teams. Eight teams have reached a Stanley Cup final over the past five seasons – Detroit (2), Pittsburgh (2), New Jersey, Philadelphia, Boston, Chicago, Vancouver, and Los Angeles. With the exception of the upstart Kings, who won the 2012 Cup, these are teams that have frequently been mentioned among the league’s top contenders in the post-lockout period. And while there have been five different Cup winners in the last five years (extending the streak of non-repeat winners since 1998), all were top-four seeds except the Kings, perhaps a special case as a thought-to-be contender with serious performance issues early in the season, but one that closed with a rush and rolled through the post season. 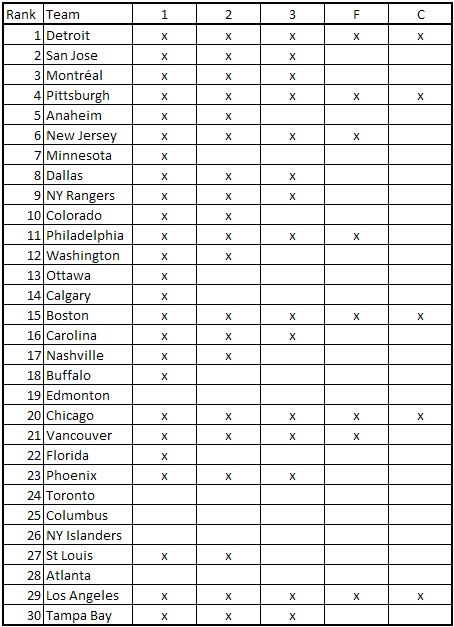 It all creates the impression of time passing a team by in the case of the Capitals. Yes, they are a playoff contender. Perhaps a playoff favorite. But if that is going to be the bar – get in, then win – that wall that represents the second round is likely to be one they will not clear.
Posted by The Peerless at 6:25 AM No comments: