The Caps appear to have, by my limited arithmetic, seven NHL-capable veteran defensemen and a prospect who has something just short of a half-season of his own NHL experience. It makes for some difficult roads to travel for the remaining prospects to find a spot on the roster.

Last year, we highlighted Karl Alzner, Sami Lepisto, and Josh Godfrey. This year, Alzner is on the cusp of graduating to the show. Lepisto is out of the organization, and Godfrey seems stuck in neutral. That leaves… 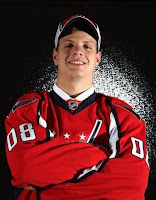 Why is John Carlson so happy? OK, this picture comes from the draft – that would be the 2008 draft (keep that in mind). Well, when your future coach says this of you on the first day of rookie camp…

"The way he handled himself out there -- just the shot he scored on, it was like, 'Wow.' Looks like he's been around a while. You know he's in shape, because that was a pretty tough skate at the end and he was the one who lasted the longest, all the time. He's ready to put a push on to make this hockey club."

…you’re doing pretty well. And it’s not an isolated point of view. His former coach in juniors said this during July’s development camp…

“He played very well for me. In the playoffs there, I was playing him 35, 40 minutes a game and he just ate it up. He's a great skater, has a good mind for the game and he's going to take a very, very good run at playing in the National Hockey League next year because of his skill level. There's no fear to his game. He's going have a great career as a 'D' in the National Hockey League”

The author of that quote would be none other than Dale Hunter, an icon of toughness for Capitals fans.

During that same development camp in July, the guy who drafted him said this…

"There were a couple of [postseason] games where we really thought he might have been the best defenseman on the ice for either team."

Carlson’s development arc suggests that he will at least push very hard for a roster spot. The temptation, perhaps to be avoided, is to bring him along too soon. It bears noting that Carlson will not turn 20 until January. He is one full season removed from playing with the Indiana Ice in the USHL. Will he be on the opening night roster? Absent a move of one of the top-seven, it says here he will not be. That is not a commentary on Carlson’s state of development or his skill. There are people who earn a paycheck in the hockey profession who are more expert than are we in that sort of evaluation. But the arithmetic doesn’t seem to fit. He could conceivably leap-frog Alzner (who seems to have fallen into some level of disfavor relative to Carlson in some pockets of Caps Nation). But giving Carlson a roster spot would seem to us meaning a commitment to play him. Having him sitting in the press box watching the proceedings as the seventh defenseman would seem an ill use of his developmental time.

But Carlson might not spend the whole season in Hershey, either. Last year, only four defensemen for the Caps played in at least 55 games. The year before, five. And those were playoff teams not employing a revolving door of defensemen trying to figure out who can play. Things happen. And Carlson would seem to be a prime candidate for call-ups over the course of the year.

Carlson comes from what was a loaded draft class. He was the 12th and last defenseman chosen in the first round of the 2008 entry draft. Of that dozen, five – Drew Doughty, Zach Bogosian, Alex Pietrangelo, Luke Schenn, and Luca Sbisa – have played in the NHL. Two – Doughty and Schenn – played in at least 70 games last year, and Bogosian would have made three but for suffering a broken leg that caused him to miss 28 games (he played in 47 contests last year).

John Carlson has passed just about every test laid before him over the past couple of years. First round draft pick in 2008?...check. Outstanding post-draft regular season? 59 games at London, 16-60-76, +23… check. Solid follow-up in the playoffs? 14 games, 7-15-22, +11… check. Move up to Hershey and impress the brain trust? 16 playoff games, 2-1-3, +3… check. Impress team management with his progress and the current state of his game? Well, just look at the quotes above, taken from earlier this summer… check. Next week, he will sit down, so to speak, to take another test – skating against the vets to try to land a roster spot. We’re betting he’ll make it very hard for the Caps to send him back to Hershey, despite what look like long odds.

It would make him, not to mention Caps fans, very happy.
Posted by The Peerless at 6:17 AM 3 comments: