The Peerless Prognosticator is ON THE AIR!!! -- Game 39: Capitals at Maple Leafs, January 7th

The Washington Capitals embark on a treacherous two-game road trip this week that will provide a stiff test after a very successful December and start to the new year (10-2-3).  First up, it is the Toronto Maple Leafs, who relieved head coach Randy Carlyle of his duties on Tuesday.  The Leafs, following in the footsteps of the New Jersey Devils, have named Peter Horacheck and Steve Spott as interim coaches.

Toronto has allowed 40 or more shots on goal 11 times in 40 games this season, tops in the league by a comfortable margin (Colorado: 8).  While they have a respectable 6-5-0 record in such games, it is a symptom of a larger problem.  They are entirely too loose in the defensive side of the game and put entirely too much pressure on their goaltenders to make too many saves on a night-to-night basis.

In their latest 2-7-0 skid, the Leafs are led in goals and overall points by James van Riemsdyk (4-5-9) who has painstakingly put together a season that builds off of last year’s career year (30-31-61 in 80 games).  In 40 games this season he is 17-20-37, second on the team in goals and points.  Like the rest of the team, however, he either struggles with defense or is a victim of a team-wide problem.  He is third among forwards in even-strength goals against/on-ice and one of five forwards on the club who has been on ice for more than 30 goals against (only 59 forwards league-wide have been on ice for more than 30 goals).  As if things weren’t bad enough, he suffered a broken nose in a 3-1 loss to Minnesota last Friday when he was struck by a shot from the stick of teammate Tyler Bozak.  In 16 career games against Washington, he is 5-7-12, minus-1.

Phil Kessel is thought of primarily as a goal scorer.  In the 2-7-0 stretch, however, he has but a single goal while recording six assists.  His lone goal, part of a 4-3 Gimmick win over Boston on New Year’s Eve, is his only goal over his last nine contests.  He has had a goal scorer’s streakiness this season, enduring streaks of five and six games without a goal, while scoring goals in consecutive games five times.  In 28 career games against the Caps, Kessel is 6-14-20, even.

Playing in goal has been no picnic for either Jonathan Bernier or James Reimer.  The pair have combined to face 34.1 shots per 60 minutes (compare that to the Washington pair of Braden Holtby and Justin Peters, who have combined to face 28.2 shots per 60 minutes).  Of the two, Bernier has held up better.  While his goals against average is middle of the road (2.67, 26th of 42 qualifying goalies), a product of the shot volumes he faces, his .920 save percentage is quite respectable (11th overall).  His .929 save percentage at even strength is tenth among 39 goalies appearing in at least 15 games.  In four career appearances against Washington, Bernier is 3-1-0, 2.01, .932. 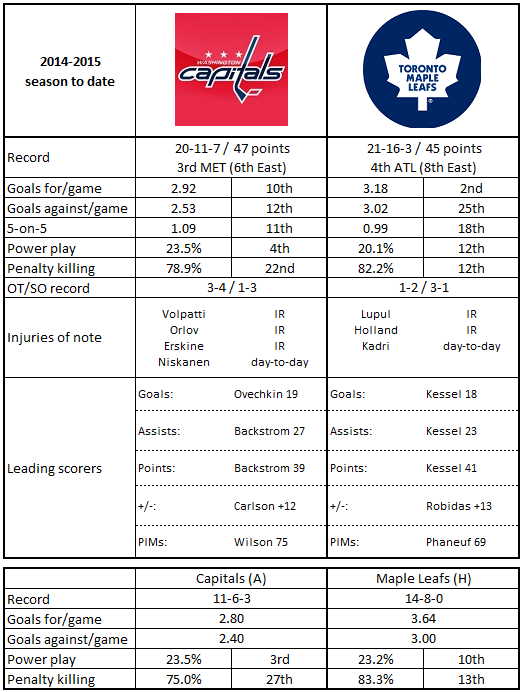 2.  Slugfests are the Maple Leafs’ stock and trade.  No, not the sort born of fisticuffs, but rather blowout games.  Of the Maple Leafs’ 40 games to date, 22 have been decided by three or more goals, by far most in the league (Buffalo: 18 in 40 games).  Toronto is 13-9 in such contests.

3.  As for the fisticuffs, a team once known for its “truculence,” the Maple Leafs are comparatively meek these days.  Having led the league in fighting majors last season (48), Toronto has just seven fighting majors this season.  Dion Phaneuf leads in that category with three.

5.  The Caps would do well not to let the Maple Leafs take a lead into the second intermission.  When doing so, only three teams in the Eastern Conference have a better winning percentage than Toronto (.933/14-1-0).

1. Only Montreal (13) and the New York Islanders (12) have more road wins than the Capitals (11) so far this season in the Eastern Conference.

2.  Washington reached the 10-win mark in one-goal games with their 4-3 win over Florida on Sunday.  Given that 23 of the Caps’ 38 games have ended in one-goal decisions (10-6-7), improvement in this area might be key to a successful finish to the season.

3.  Washington’s recent tendency to giving up large numbers of power plays to opponents (29 in their last five games) is reflected in the fact that the Caps now have the tenth highest average penalty minutes per game (10.6) in the league.

4.  Toronto might not want to let the Caps go into that second intermission with a lead, either.  Only Tampa Bay (19) and Montreal (18) have more wins than the Caps (17).

5.  We know Toronto gives up a ton of shots.  Unfortunately, the Caps are not a team that handles such situations well.  Washington is 7-8-4 when outshooting the opposition, their .368 winning percentage ranking 26th in the league.

When the coach is a casualty of poor performance, much of the attention turns to the team captain.  Dion Phaneuf has been in the league ten years, parts of six of them with the Maple Leafs, and he has been team captain since June 14, 2010.  Phaneuf’s headline numbers (2-20-22, plus-6) have been solid, consistent with his career averages.  And, he has points in each of his last four games (0-4-4).  He leads the team in ice time per game (23:34) and is tied for third on the team in power play points.  From a high level of observation, he has been a solid contributor.  However, things don’t seem quite right.  Since he took over as captain, Phaneuf’s team has a 157-140-37 record, has never finished higher than third in their division, and has been to the playoffs once.  Two coaches have been dismissed in his captaincy.  Is this record of misfortune his fault?  No, at least no more so than those of the Caps are the fault of their captain, Alex Ovechkin.  But it is upon his shoulders that a lot of the pressure exists in one of the most contentious media markets in all of hockey.  Few players in the league have a tougher job than Dion Phaneuf, especially these days.

The other captain might be in midst of an extended hot streak.  In his last dozen games he is 7-6-13, plus-10 (that’s right, plus-10), and has five multi-point games.  He is on a three-game multi-point streak as the Caps visit Toronto.  He has inched up into a tie for sixth among goal scorers, and his plus-9 for the season is tied for 53rd among all skaters (remember than last season he was 884th of 886 skaters in that statistic).  His recent production mirrors the success of the Caps (8-1-3 over those same last dozen games).  But good as he has been recently, it almost goes to show that it is the supporting cast, which has been productive as well, that has been as much a reason for the Caps’ recent success.  And the Maple Leafs are a team against which Ovechkin might continue his good fortune.  He is 27-22-49, plus-4, in 34 career games against Toronto.

The Toronto Maple Leafs pack more drama into a season than perhaps any half dozen teams you could mention.  A team that enters this game with a 2-7-0 record over their last nine games, that is hanging by a thread to a top-eight spot in the conference, and that has fired its coach in favor of a two-headed system for the time being certainly does not lack for drama.  Will it be a cause for the players to focus on the task at hand, or will it be a distraction?  For the Caps, it’s another day at the office.  Punch your time cards, and bring your lunch pails, and it will be a good start to the road trip.