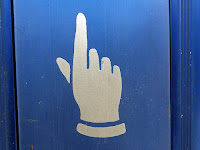 How many times do the questions have to be asked?...

Can the Caps put an opponent away?

Can they step on the throats of an opponent when they get out to a lead?

Can the Caps put a team on the canvas… and KEEP them there?

Can the Caps handle good fortune?

The answers were all on display tonight in the last 20 minutes of the Caps’ contest against the Toronto Maple Leafs. And the thundering answer to all of them was “NO!”

The Caps held a 4-1 lead on the Maple Leafs, but gagged on it, allowing three goals in a span of 14:20 to let the Leafs off the canvas to tie the game, and in what was a fitting “stick-your-backside-in-the-goalie’s-face” trick move by Mikhail Grabovski for the only goal of the Gimmick round, the Leafs completed the comeback for a 5-4 win.

It ruined a nice night by Mathieu Perreault, who had his first two goals of the season, and Alex Ovechkin, who became reacquainted with the wrister-through-the-defenseman shot that Toronto goalie Jonas Gustavsson didn’t see until it was bouncing back out of the net.

That goal by Ovechkin 13:50 into the second period signaled the end of the Caps’ night, for all intents and purposes. Instead of slamming the pedal to the floor and burying the Leafs before skating off at the second intermission, the Caps managed only one more shot on goal in the last 6:10 pf the period, and that was a 125-footer by Matt Bradley with nine seconds left.

The third wasn’t any more inspiring. By the time the Caps got around to taking their tenth shot of the period (with 1:07 left in regulation), the Leafs had three goals and tied the game. That the Caps managed to get through the rest of the period without shooting one into their own net is a mystery, that they could be awarded a standings point for those last 20 minutes of regulation an injustice.

-- The Maple Leafs skated off the Verizon Center ice having scored a total of 20 goals in 11 road games. Eight of those goals have been scored in two games on Washington ice.

-- Toronto scored a power play goal tonight, the fourth such goal on the road this season for the Maple Leafs. It was the first one they scored in more than a month, the sixth game since their last one. Oh, their last road power play goal before tonight? Against Washington on November 3rd.

-- That was the first time this season the Caps lost after leading at the second intermission (12-0-1).

-- OK, so Alex Ovechkin had his second goal in as many games. Except for a few shifts he almost looked out of place out there, though. He is not even looking at the net on the power play, or he is whiffing on the attempts he is taking. And the whiffing is getting to be a persistent problem.

-- Four power plays, two shots on goal. OK, they scored on one (Mike Knuble), but still…

-- Look, we think that being an enforcer is among the most difficult job descriptions in all of professional sport, but the fight between D.J. King and Colton Orr seemed like the cartoon at the intermission of the movie. It was entirely out of place with no contribution to the larger context of entertainment. What was the point?*

-- Alexander Semin’s attempt in the shootout never had a chance. He will probably sleep pretty well. On the other hand, Mathieu Perreault’s attempt clipped a piece of the goalie stick waved by Gustavsson in desperation before popping out behind Gustavsson on the other side of the crease. One could lose sleep thinking, “just one inch higher…”

-- Speaking of inches, it the goal was four feet, eight inches high (instead of merely four feet), the Caps would have had a dozen goals. An awful lot of pucks went sailing just high over Gustavsson’s shoulders.

-- If you let a pitcher off the hook early in baseball by not getting to him when he doesn’t have his stuff, chances are you’ll regret it as the game goes on. Same with a goalie. Gustavsson allowed four goals on the first 20 shots he faced, none on the last 16.

-- You could almost see this coming even early in the game. Toronto did a pretty good job breaking down the Caps’ defense with their set offense, creating a number of 2-on-1’s down low that required Michal Neuvirth to bail the Caps out from. Toronto started cashing those chances in late – Tim Brent’s tip-in to tie the game (when he outfought John Carlson for position) and Clarke MacArthur’s goal from the doorstep when he beat Neuvirth to a position in the paint where the puck was headed.

-- Jason Chimera is very, very fast. But you knew that already.

-- Boyd Gordon isn’t getting enough credit. He had more than one blocked shot tonight by our eyes (and that 12-for-15 on draws was pretty good, too).

-- From the “it was the best of times, it was the worst of times” file… Nicklas Backstrom had two assists, and he was on the ice for each of the last three Toronto goals in regulation.

In the end, after three years this kind of thing is getting old. The Caps give away a game, blow a lead, go quick and quiet in the end, then spend the rest of the night polishing all the right quotes about "We quit playing in our zone (Bruce Boudreau),” or "we did it to ourselves. We made some bad clearing attempts and some bad plays. We got away from doing what got us the lead, getting pucks deep and working down low (Tom Poti)," or “a 4-to-1 lead after two periods is pretty big. Losing a game like this is pretty bad for us (Alex Ovechkin).”


*  Note...here is the point.   Like we said...one of the most difficult job descriptions in professional sports, as opposed to being, well, a blogger.
Posted by The Peerless at 12:32 AM 1 comment: