Tell them what they've won, Johnny!

...a doff of the cap (not NHL on Versus) to James Mirtle for noting this.
Posted by The Peerless at 3:22 PM 2 comments:

Traded...to Pittsburgh in 2001 (with Michal Sivek and Ross Lupaschuk, plus a lot of cash) for Jaromir Jagr and Frantisek Kucera

Traded...to Nashville in 2005 for a conditional draft pick

Traded...to Washington in 2006 with a first round draft pick for Brendan Witt

Signed...as an unrestricted free agent in 2007 by Columbus

Claimed...off waivers in 2007 by Vancouver Is the third time a Cap a charm for Kris Beech?...

...or the second time in Hershey?

* reported by Tarik El-Bashir on the Capital Insider bolg.

Blocked Shots/Game: 1st (all forwards, minimum 20 games)
Posted by The Peerless at 8:27 AM 6 comments:

The Leafs are Ready 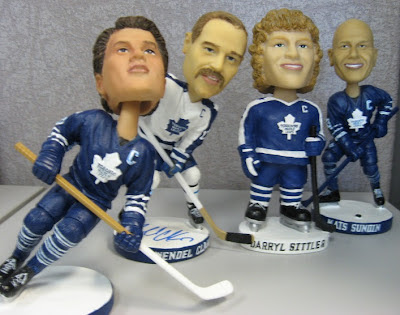 Posted by The Peerless at 7:59 AM No comments:

The Peerless Prognosticator is ON THE AIR!!! -- A Two-Fer: Caps vs. Maple Leafs

It’s a back-to-back two-fer with the Toronto Maple Leafs tonight and tomorrow night as the Caps seek to keep the fury unleashed and extend their four game winning streak. It gives The Peerless a chance to cover two games with one prognosto while celebrating “Wiener Week” in DC. And what better way to celebrate Wiener Week than to bring in an all-star line-up of foodies to lend their advice on the best way to enjoy America’s favorite processed meat product treat.

First, let’s hear from Rachael Ray…food show host, talk show host, donut spokesperson, and generally annoying personality, who has her own take on how to prepare the frankfurter…Rachael, welcome.

“Oh, it’s such a pleasure you must feel to have me here…”

Uh, sure, I suppose…now, for our readers out there looking to prepare their own heaven-on-a-bun, what do you recommend.

“Well, first you put some hot dogs, mustard, relish, bun, onions, a can of tuna, three lemons, a dozen eggs, and Emeril Lagasse in a bowl, because you have to make a point that you can carry everything in one bowl. Then, you add some ee-vee-oh-oh to a screamin’ hot grill and add your hot dogs. Then you grill ‘em, and put ‘em on a bun for a tasty sammy…dee-lish.”

What about the onions, mustard, tuna, lemons, Emeril, and all that?

OK…so how about you, Paula Deen…what’s your take on hot dogs?

“You bet…but you have to be careful about cooking hot dogs to do it right. You don’t just toss a handful of wieners in a pot and boil ‘em. That would be simple and, well… efficient. You have to act like you’re in some chemistry lab…to 1500 ml of water in a non-reactive sauce pan, you add 26.435 g of kosher salt. Bring this to a boil, then add 454 g of hot dogs – by weight of course – and reduce the heat to simmer. Then…walk away…just walk away. Leave the pot to simmer for 8 minutes and 35 seconds, until the internal temperature of the hot dogs reach 170 degreees. No amount of stirring, mixing, jiggling, or even watching will cook the hot dogs more quickly. When the hot dogs are done, use tongs – never a fork – to remove them from the liquid and place on a paper towel to absorb any latent liquid. Insert the dogs into the buns you have baked – that’s a different show – and add your own condiments of joy…a cranberry chutney, or maybe a candied ginger relish. Now that’s…good eats.”

Sez you, pal. Sandra Lee…what about you…is there a “semi-homemade” perspective on this unique American treat?

Well, at least the dogs will be only a buck at Verizon Center on Thursday night. As for the games, the Maple Leafs provide the kind of dangerous opposition that should have the Caps on their toes, a team that gives the appearance of being ripe for the plucking that is in the midst of what is referred to in the management literature as a “big honkin’ shake-up.”

Leafs general manager John Ferguson, Jr., was put out of his misery yesterday, being relieved of his duties in favor of Cliff Fletcher, who isn’t a long term solution, either. He has the dreaded term “interim” attached to his title, but at least he has a soft place to land. He will retain the title of “consultant” when some poor fool is found to accept the second most thankless job in hockey, that of “General Manager, Toronto Maple Leafs.”

The most thankless job in hockey is that of “Head Coach, Toronto Maple Leafs,” and the current incumbent -- Paul Maurice -- has presided over a club with diminishing returns of late. Team Turmoil is 4-8-0 in their last dozen games, a performance that has allowed them to settle into 14th place in the Eastern Conference (the Caps left the furniture behind so the blue and white can feel comfortable). And it isn’t a record that has been achieved by accident or bad luck:

The Leafs are thin on the blue line with injuries to Bryan McCabe and Carlo Colaiacovo. Youngsters Ian White and Anton Stralman have had to log replacement minutes, and the -15 in a combined 69 games this year speaks to the effectiveness of that.

Looking for a goalie? Toronto is…or perhaps should be. If you look up the word, “hideous,” in the dictionary, chances are you’ll find a picture of Andrew Raycroft. 2-8-4, 3.94, .874. He’s not making anyone forget Johnny Bower. More like, “bow-wow.” Vesa Toskala would appear to be the one to get the call tonight…maybe tomorrow, too…but he was pretty grim in his only appearance against the Caps this year…four goals on 13 shots in 14 minutes of play. On offense, you’d be hard pressed to do better against air. But Toskala does have a winning record this year (16-13-4), and that is at least something to hang hopes on for Leafs fans.

Toronto is one of those teams that can be dangerous to a team like the Caps, themselves a team with not enough talent to get by on talent alone (as Herb Brooks might say). We’ve made a point of noting Alex Ovechkin’s amazing consistency in his young career, but the Leafs' captain – Mats Sundin – is the gold standard of consistency over his career. 1,295 points in 1,280 games – 1.01 points per game – and his points per game by season break down like this:

He’s been a consistent performer and a fierce competitor for going on 17 seasons, and he can carry a club in a game or for a stretch of games. He’s the subject of considerable speculation as to his possible trade, but for the moment he is a Maple Leaf, and he will be the focus of attention.

Unfortunately for the Leafs, Sundin does not have a lot of consistent support around him, and it isn’t likely he can outscore the Caps in this back-to-back. If the Caps attend to business and don’t spend too much time reading their own press and blogispraise, they can and should sweep this back-to-back. Besides, they like playing in Canada, and they’re finally above .500 at home…