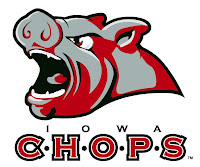 One and done... to a crisp.
The American Hockey League has announced that the Iowa Chops -- rebranded to much fanfare one year ago today -- have been "involuntarily suspended" by the league based on an inability "to remedy certain violations of the provisions of the league’s Constitution and By-Laws." The Des Moines Register has more on the story...

"[AHL President and CEO Dave] Andrews declined to cite the specific violation, but the Des Moines Register reported last month that the club had used the franchise as collateral to obtain a loan in March 2008 from a North Carolina branch of Wachovia Bank. Records obtained from Polk County have disclosed the loan amounted to $1.99 million and was used to cover operating costs.Andrews has said such loans are not permitted under league rules."

The suspension ends any hope of a 2009-2010 Chops season in the AHL. Talk about your troubled franchises. They started operations as the Iowa Stars in 2005-2006 (transplanted from Louisville, where they were the "Panthers," an affiliate of the Florida Panthers). Since moving to Iowa, the Stars (which became the "Chops" this past year) have had affiliations with the Dallas Stars, Edmonton Oilers, and Anaheim Ducks, the last of these ending this past May. When the new name was announced last July, team owner Kirby Schlegel noted that the new name "perfectly represents our vision of the new team... It illustrates Iowa’s agricultural heritage while also playing into the definition of ‘chops’, having nerve, resilience and staying power." Staying power appears to be one year, absent any corrective measures to restore the franchise to normal business operations.
It makes a Caps fan (not to mention a Hershey Bears fan) thankful for the stability and tradition a couple of hours up the road.
Perhaps as a function of the Iowa situation, the AHL is realigning its divisions. The new alignment has this look... 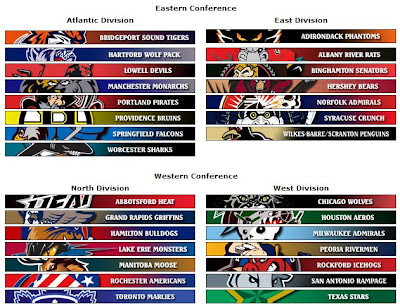 According to the AHL, Hershey will play the Wilkes-Barre/Scranton Penguins 12 times in the 2009-2010 season. Familiarity, as they say, breeds contempt.
Posted by The Peerless at 1:51 PM 1 comment:

The unrestricted free agent signing period in the NHL is hockey’s version of perverted hope. Just one more piece (or two or three or four), and your team can compete for a playoff spot or, be still my beating heart, a Stanley Cup championship.

Unfortunately, it doesn’t often work out that way. But it doesn’t stop some teams from going over the top with their signings. Every year, it seems, there is one signing (ok, at least one) that gets one to scratching their head – what are they thinking?

A couple of years ago, it was St. Louis – a team that finished 15 points out of the playoff eight in the Western Conference, lavishing Paul Kariya with a three-year, $18 million contract. Kariya, playing for a weak team that would finish worse off than it did in the year before he was signed by the Blues, would have a decent year, all things considered – 16-49-65, -10 – but was hardly a difference maker on a club that finished with 79 standings points (two fewer than in 2006-2007), good for 14th in the West. Not much return on that investment, and one could probably see it coming when it happened.

Last year, it was Wade Redden, once a promising defenseman for a strong Ottawa Senator team, but whose production slipped after fellow defenseman Zdeno Chara left the Senators for Boston. It made for another head-scratching moment when he was signed by the New York Rangers as an unrestricted free agent to a six-year/$39 million deal. While the Rangers held on late to secure a playoff spot (after a 10-2-1 October), Redden struggled to a 26-point season (his lowest point total since his second year, in 1997-1998) and a minus-5 (worst of his career), often earning the wrath of fans and news columnists in the Big Apple. It is a contract we’re sure the Rangers would like to unload at this point.

This year there are a number of candidates for top head-scratching deal. There is the five-year/$37.5 million deal signed by Marian Gaborik with the New York Rangers. Gaborik has played in 207 of a possible 328 regular season games since the lockout and is coming off a season in which he played only 17 games and had hip surgery. We can, however, understand the thin thread of logic on which this deal hangs. The Rangers finished 28th in scoring for the 2008-2009 season (2.44 goals/game) and amazingly, given the reputation for weak defense the Washington Capitals had, managed only 1.57 goals/game in the seven game opening round playoff loss to the Caps. Gaborik, when healthy, is perhaps one of the top-five offensive talents in the game.

However, a bigger head-scratcher might be the deal signed yesterday by Alex Kovalev with the Ottawa Senators. Although the term is agreeable for a 36-year old forward (two years), the $5 million a year seems more than a bit odd. In his four full seasons in Montreal, Kovalev topped 30 goals only once and topped 65 points only once. On an 82-game basis, Kovalev averaged 28-43-71, -2. But except for his big 2007-2008 year (35-49-84, +18, in 82 games), he had a rather disappointing stay in Montreal overall.

That Ottawa would spend so heavily on a player who isn’t likely to play on a playoff team in either of the next two years (especially if Dany Heatley is unloaded for prospects in trade), and to give him a $500,000 raise to boot, well... it's a head-scratcher.

There are other head-scratchers out there… Atlanta giving $4 million a year to a player who has yet to net 30 goals or reach 60 points in a season (Nik Antropov)… Tampa Bay giving a 33-year old defenseman (on opening night) a seven-year contract (Mattias Ohlund)… Toronto giving a player with one full season in the NHL (20-28-48, minus-8) a three-year/$8.7 million deal (Mikhail Grabovski).

You might have your own head-scratchers to add. This summer, be careful… you might end up bald from all the head-scratching you’ll do.
Posted by The Peerless at 6:48 AM 1 comment: