The Peerless Prognosticator is ON THE AIR!!! -- Caps vs. Lightning, December 7th

It’s a Monday Madness Matchup between the streaking (five game winning streak) Capitals and the Home-cookin’ Tampa Bay Lightning (7-2-4 at home this year). The Caps will visit Tampa with their super-charged power play giving their opponents quite a jolt, and no one knows more about “jolts” than The World’s Mightiest Mortal, the man with the magic lightning himself, Captain Marvel. Captain, it’s good to see you.

“Oh, I’m a big Capitals fan, Peerless. Every time I hear the word “Shazam!” I think of the Caps.”

Is that so? Why is that?

“Well, as all fans of the Justice League of America know, whenever my alter ego, Billy Batson, utters the word, 'Shazam!', he is struck by a lightning bolt and transformed into what you see before you, empowered with the abilities of six legendary figures.”

And what does that have to do with the Caps?

“Ah, I see those powers in the Capitals…”

“Oh, absolutely… ‘S’ stands for the wisdom of Solomon, and that’s Bruce Boudreau to a ‘T.’ He has pulled all the right levers in getting the Caps to the top of the Eastern Conference. Then there is ‘H’ for the strength of Hercules… that’s Brooks Laich going to the net. And, of course, ‘A’ stands for the stamina of Atlas. And there you have Mike Green skating almost 25 minutes a game and fourth in the league in power play ice time.”

“That’s not all… ‘Z’stands for the power of Zeus. And with a power play leading the league at 24.6 percent, the Caps are pretty powerful themselves. ‘A’ stands for the courage of Achilles, and oh, where do you start… Quintin Laing throwing himself in front of shots, Matt Bradley standing up to anyone in a different colored sweater, Mathieu Perreault sticking his nose in the land of the giants on just about every shift… and then there is ‘M’ for the speed of Mercury, and that’s Alex Ovechkin steaming down the left wing, striking fear in the hearts of defensemen and goaltenders who have no idea what he’s going to do with the puck, other than deposit it into the net somehow, some way. And there you have it… Shazam!”

They’re a marvel, to be sure. But Tampa Bay has enjoyed quite a bit of success at the St. Pete Times Forum. No team has lost fewer games in regulation at home than have the Lightning (two). The dark cloud there, however, is that both losses have come in the Lightning’s last four games at home – a 4-3 loss to Toronto and a 3-0 loss to Colorado.

It part of a broader struggle for the Lightning, who are in the midst of a 1-3-1 run in which they’ve been outscored 14-10. It just hasn’t been a team that has had a lot of traction lately. One way to look at the recent problems for the Lightning is this – their leading scorer in the last four games is Jeff Halpern (3-1-4). Whatever skills Halpern has, if he is leading the Lightning in scoring for any appreciable length of time, chances are that the team is struggling, and right now they are doing just that, although their overall numbers aren’t bad… 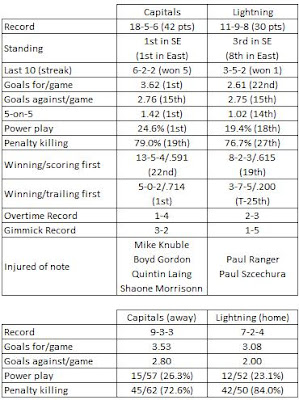 The guys one would expect to be at the top of the scoring rankings for the Lightning – Vincent Lecavalier, Martin St. Louis, and Steven Stamkos – are struggling of late. St. Louis hasn’t had a goal in eight games. Lecavalier is 2-3-5 in his last eight, continuing a year-long struggle to get footing in the scoring race (6-18-24 in 28 games), and Stamkos is 0-1-1 in his last four games and a minus-4.

And it isn’t as if the Lightning are getting a lot of support from down the roster. Ryan Malone hasn’t been bad – he is 1-2-3 in his last three games after a three game streak without a point – but it hasn’t been enough to lift he Lightning offense. And Alex Tanguay hasn’t had a goal in his last ten games dating back to a game-winner he had against Phoenix on November 16th.

In fact, the only Tampa Bay player with more than one goal in the last five games other that Jeff Halpern is Steve Downie.

We will repeat that…

The only Tampa Bay player with more than one goal in the last five games other that Jeff Halpern is Steve Downie. Downie is sixth on the team in overall scoring, although being sixth on this team in scoring is not quite the same as being sixth on, say, the Caps. Downie is 5-7-12 on the year for his sixth place spot in the Lightning scoring rankings. By way of comparison, Brendan Morrison is sixth for Washington at 9-14-23.

Lecavalier and St. Louis have been particular thorns in the sides of the Capitals over the years, and both have been better than a point a game player against Washington since the lockout (Lecavalier 18-19-37 in 28 games, St. Louis 12-19-31 in 29 games). But over the past two years, these two have been as likely to see the puck sail into their own net when they are on the ice as much as putting it into The Capitals’ net. Lecavalier is 6-9-15 in 13 games against the Caps over the last two seasons, but is a minus-7 in those games. St. Louis is 5-13-18 in 14 games, but is a minus-2.

On defense, the story for the Lightning might be the old and the new, with a Swedish twist. First, Victor Hedman of Ornskoldsvik, Sweden, was selected by the Lightning in the June 2009 entry draft. Although Hedman isn’t getting much in the way of Calder Trophy buzz, that might be a product of so very few statistics on which defensemen can build a case. However, he is already second on the team in ice time among defensemen (22:30/game) and is one of three Lightning defensemen averaging over two minutes a game on both the power play and the penalty kill. He has had his minutes dialed back, though, averaging a shade under 19 minutes a game in his last seven contests compared to averaging almost 24 minutes in his first 20 games.

At the other end of the blue line age scale is Mattias Ohlund of Pitea, Sweden, who was signed as a free agent by the Lightning this past summer. The 33-year old joined Tampa Bay after spending his first 11 seasons in Vancouver. Ohlund has struggled a bit with injury and production. He missed seven games with a lower body injury in late November, but otherwise has only six points (all assists) in 21 games. Ohlund is primarily a defensive defenseman, but he has never finished a full season (at least 60 games played) having scored fewer than 25 points.

Coach Rick Tocchet has been alternating goaltenders Mike Smith and Antero Niittymaki over the past five games, and if this pattern holds, Niittymaki will get the start tonight. He would be a good choice. Niittymaki is 5-2-1 against the Caps over his career, with a 2.31 GAA and .927 save percentage. Over the last two years, he is 3-0-0, 1.68, .954. However, all of that was with Philadelphia. Still, he has had more success against the Caps than teammate Mike Smith, who is 0-2-0, 6.67, .776 in his career against the Caps.

1. Fitting the pieces. The Caps scored 14 goals in two games while Alex Ovechkin was sent off for a two-game time-out for not playing well with others. You’d have to think Ovechkin was pacing the floors like a caged lion during those two games, watching his teammates pounding the Panthers and Flyers, wishing he could be in on the fun. The temptation here might be to take over the NHL scoring lead on his first shift or see how many Lightning he can put lights-out. Given how well the Caps have performed in his absence, he’d be better served, not to mention the team, if he blends in rather than tries to stir the drink all by himself.

2. Don’t make it a special game. Tampa Bay has played only six home games (of 17 total) since November 1st. But in those games, the Lightning are 6-for-24 on the power play (25.0 percent). Since November 1st, the Caps are 22-for-31 in killing road penalties (71.0 percent). That’s not a good mix. Fortunately for the Caps, they have allowed only 31 man advantages to the opponent in nine road games since November 1st (3.44/game). Keep that up, and the visitors should be alright.

Tampa Bay has hung around the edge of the top-eight for most of the season. That is quite an improvement over last year’s train wreck of a season. They are on pace for a 22-point improvement over last year’s finish. But the other side of that is that the Lightning have won consecutive games only twice this season (once including a Gimmick win), and strangely enough they won the second game on each occasion on the 12th of the month (against Florida in October, against Minnesota in November). It’s too early in December for the Lightning to win a second consecutive game after beating the Islanders last Saturday. So…

Number 10. ““He kind of came at me the shift before. He was talking to me before. I thought we were going to fight."

Number 9. “Everything happened pretty quick, I saw him drop his gloves, so I started punching him."

Number 8. “I didn’t like the sissy helmet he wears.”

Number 7. “I was channeling my inner Dave Schultz.”

Number 5. “I needed a quick tune up before my pay-per-view bout with Bobby Pulaski of the Camden Mites.”

Number 4. “Nothing impresses a new coach like taking 29 minutes in penalties and putting my team on a nine-minute penalty kill.”

Number 3. “I needed one more fight to get a free ‘I’m a Broad Street Bully’ bumper sticker”

Here's the video, courtesy of johnwaltonhockey.org

Posted by The Peerless at 12:23 AM No comments: