"Vokey play unbelievable and he keep us in the game and keep the lead..."

So said Alex Ovechkin of goaltender Tomas Vokoun's play last night.  And ever since we have been humming this... 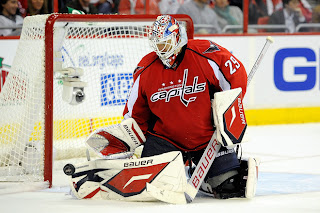 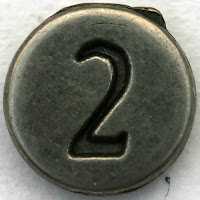 On December 20, 2008, the Washington Capitals went to [Insert Name of Large American Banking Firm Here] Arena and were pasted by the Philadelphia Flyers, 7-1, in what was one of the more frustrating games in Caps’ history. In that game the Caps launched 25 shots at the Flyer net in the first period, only to be frustrated on all of them. They outshot the Flyers, 39-13, over two periods, yet found themselves down 3-0 after 40 minutes before losing by that frustrating 7-1 score.

Why do we bring that up? Well, going into tonight’s game at Wells Fargo Arena, it was the last time a Caps team has lost a hockey game in regulation in the regular season in the Commonwealth of Pennsylvania. That’s right. Against the Flyers and Pittsburgh Penguins the Caps were 9-0-2 in their last eleven regular season visits to the Commonwealth heading into Thursday's game. And when they skated off the ice at Wells Fargo Arena, it was 10-0-2 after a 5-2 thumping of the Flyers.

One is tempted to say that the game was closer than the final score indicated, but the truth of the matter is, the apt description of this game is that it laid bare the current state of results of actions taken long before the first puck was dropped in this game. Actions taken last summer. On the one hand there was one team that added some grit on the forward lines, depth on defense, and elite goaltending. On the other was a team that moved a large part of the core that sustained it for the last several years, opting to try and forge a new chemistry. Oh, and add what they believe to be elite goaltending.

The results for a game at this early stage might not have been predictable, but their weren’t surprising. The Caps spotted the Flyers an early goal, then roared back with two quick strikes in the last 80 seconds of the first period and three more in the first five minutes of the third to turn a close game into a rout. A late goal by rookie Sean Couturier was like trying to put an evening gown on a pig for the home team in the 5-2 final.

-- The Caps are a more complete product than are the Flyers at the moment. Certainly they got more out of their summer additions than did the Flyers. Roman Hamrlik and Joel Ward each scored their first goal in a Caps uniform, and Tomas Vokoun stopped 40 of 42 shots. Even Jeff Halpern, who did not figure in the scoring, won four of five defensive zone draws and five of six overall.

-- On the other side, the 51 Million Dollar Man stopped the first eight shots he saw, then allowed five goals on the last 20 he faced. For Ilya Bryzgalov, that makes him 1-0-1, 3.98, .872 in three appearances since shutting out New Jersey.

-- Every goal has a story before the puck hits the back of the net, usually one of hard work or smart play before the shot is taken. For instance, on the Caps’ first goal Mathieu Perreault played the kind of smart zone defense he is not often credited with playing. Patrolling the middle to prevent an exit pass, he did just that, stealing a blind pass that Flyer Scott Hartnell put right on his stick (it might have been the best pass of Hartnell’s recent career). And then Perreault did what one does in that situation…put the puck on net. It hit something on the way through and eluded Bryzgalov to tie the game.

-- On the second one, Alex Ovechkin whacked home a rebound into an open net. But it was Nicklas Backstrom beating Claude Giroux to a loose puck behind the Flyer net, getting position on him, then going strong to the net to force Bryzgalov to defend the near post. Backstrom was not able to stuff the puck in, but there was Ovechkin, playing low and positioning himself on the other side of the crease to whack in the rebound.

-- On the third one, Roman Hamrlik scored from long range, but it was the work of Matt Hendricks behind the net, fending off defenseman Andreas Lilja as he was circling behind the cage and pushing the puck out to Hamrlik, who then wristed it off Lilja’s stick to give the Caps a cushion and end a shift that Lilja will want to forget.

-- The fourth one was a product of a different-look power play. Alex Ovechkin wasn’t manning the Distant Early Warning Line 60 feet from the goal. He was in the middle of a 1-3-1 set up, and as Nicklas Backstrom held the puck on the right wing wall, he jumped into a void at the edge of the right wing circle where he snapped a pass from Backstrom past Bryzgalov before Maxime Talbot could close in and neutralize his stick.

-- On the last one, Joel Ward simply beat Kimmo Timonen to a spot and couldn’t be moved off his position by the smaller defender. But Ward doesn’t get a chance to deflect the puck behind Bryzgalov if defenseman Jeff Schultz doesn’t send a shot low along the ice. It is a basic, yet too often neglected skill.

-- At the other end of the ice, Tomas Vokoun continued his sizzling run of puck-stopping. Since allowing a goal at the 12:56 mark of the third period against Tampa Bay he has stopped 139 of 144 shots for a .965 save percentage, and he has a goals against average of 1.18.

-- Vokoun did not lack for work. Every Flyer skater registered at least one shot on goal except Andreas Nodl. It also happened that Nodl was the only Flyer with less than ten minutes of ice time, or he might have gotten one of his own.

-- That’s the fourth straight game in which Ovechkin finished with less than 20 minutes of ice time (tonight: 17:59). At first glance, one might think it a product of a deeper Caps power play that relieves him of some of that responsibility. But he is skating only about 40 fewer seconds a night on the power play than he averaged last season. His even strength time is down 1:28 from his average last season. That is where the Caps’ depth is being reflected.

-- This was an odd game for a goaltender in this respect. Goalies have to prepare for every shot, whether they get all the way through or not. Yes, Vokoun faced 42 shots on goal – not something one would like to see on a regular basis. But the Flyers had only 61 attempts, 19 of them either blocked or missing the net. The Caps had “only” 28 shots on goal, but finished with 64 attempts. Vokoun had a bigger shot workload, but did he have to expend that much more effort than Bryzgalov than the shot totals would suggest?

-- If Alex Ovechkin got the hard hat for his two-goal night, the fourth line should get the tool belt. Mathieu Perreault, Jeff Halpern, and Matt Hendricks finished 1-2-3, plus-5, had four hits, two takeaways, a blocked shot, and were 13-for-17 on faceoffs.

-- Speaking of the blocked shot for that line, it was half a foot away from being a disaster. Matt Hendricks dropped in front of a drive by Andrej Meszaros and took it right in the middle of his chest, on the third star above “Capitals” on his jersey. Painful as it had to be, six inches higher, and it might have been worse.

-- It had to happen in Philly. One might remember in the movie, “Rocky,” the title character is very proud of never having his nose broken in more than sixty fights, until he has his beak busted by Apollo Creed in Philadelphia. Well, Brooks Laich might not have had his nose broken (no report of it after the game), but it wasn’t for lack of effort by the Flyers. Twice he was the victim of high sticks in the schnozz, once courtesy of Braydon Coburn (a double-minor), once courtesy of Danny Briere, a penalty that would have been a double-minor had Laich not been bloodied by the earlier high-stick.

-- With Ovechkin’s power play goal tonight, that makes power play goals in five of six games (6-for-23) and four in a row. The Caps did not have a streak of four games with a power play goal all of last season. The last time they had a longer one was a seven-game streak, March 6-18, 2010. They were 4-1-2 in that sreak.

In the end, what might have been anticipated as a close game at the start, and in fact was one through 40 minutes, ended up displaying the relative states of these teams. The Caps are deeper with more top-end talent that the Flyers, who are relying on Danny Briere and Claude Giroux to take up the slack after the departure of Mike Richards and Jeff Carter in the middle. And with Brayden Schenn , Sean Couturier, and Matt Read in the lineup they are uncharacteristically young, too. Whether that will yield dividends for the Flyers down the road, one cannot know. But one has to wonder about the differences between the pipes for these teams. Vokoun’s recent record we noted above, but as for Bryzgalov, in his last 15 games (including playoffs) he is 5-7-3, 3.04, .902, with one shutout (against, it should be noted, a team that isn’t especially frightful on offense – New Jersey, currently averaging barely a goal and half a game). He has allowed three or more goals in 11 of those 15 games.

But that’s the Flyers’ problem to solve. The Caps began a difficult stretch of their schedule – four of five opponents being playoff teams last season – on the right foot. A tough road test passed. It gets harder, though, with the Red Wings coming to town on Saturday.

Maybe they can play in Pennsylvania?
Posted by The Peerless at 1:20 AM 2 comments: