Coming into this season, Matt Niskanen was one of 26 active defensemen to have appeared in at least 700 games and recorded 250 points.  Not an exclusive club, but not one of wide membership, either.  In his first three seasons with the Washington Capitals after signing a contract as a free agent in the summer of 2014, he posted consistently better point total – 31 points in 2014-2015, 32 points in 2015-2016, and 39 points last season.  He averaged more than 22 minutes of ice time per game in each of those three seasons, and he improved his discipline, taking a diminishing number of penalty minutes – 47 in 2014-2015, 38 in 2015-2016, and 32 last season.

Niskanen was also a durable player, missing a total of only four games with the Caps over three seasons (all of them last season) and 53 over ten seasons entering the 2017-2018 campaign.  His durability was put to the test early in the season.  He dressed for the first four games, skating more than 20 minutes in all of them, more than 25 minutes in two of them.  He was on his way to adding to that string in the Caps’ fifth game of the year, in New Jersey against the Devils.  But late in the second period of a 2-1 game, Caps in front, he was slashed by Jimmy Hayes.  He sat out the remainder of the Caps’ 5-2 win and then was placed on long-term injured reserve, ultimately missing 13 games.

Niskanen’s absence mattered.  The Caps went 7-6-0 in those 13 games he was out of the lineup, and they lost the first two games he played upon his return when he skated 20:33 in a 6-3 loss to the Nashville Predators and only 17:56 in a 6-2 loss to the Colorado Avalanche.  In those 15 games, the Caps allowed 51 goals (3.92 per game).  Niskanen recorded his first point since Opening Night in the Caps’ next game, an assist on the game-winning goal by Dmitry Orlov in a 3-1 win over the Minnesota Wild.

Niskanen was durable thereafter, playing in 61 of 62 games starting with that game against the Wild when he returned to the score sheet.  Over that span he was 7-21-28, plus-24, a scoring line that on a per-82 game basis would have been 9-28-37, plus-32. With durability came consistency.  In his last six ten-game segments he had four or more points in five of them and was a “minus” player in just one of them. 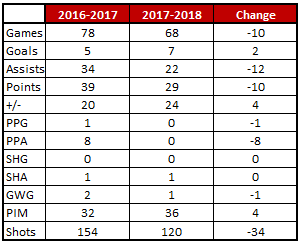 Cheerless’ Take… In some respects, a more active Niskanen was not a more effective Niskanen.  When recording at least three shots on goal, the Caps were just 8-7-2.  They were 9-5-1 when he was credited with at least three hits.  And before we get to the “odd” Niskanen fact, here is a strange one.  The 2017-2018 season was Niskanen’s first in the NHL in which he did not record a power play point.

Between injury and circumstance, Matt Niskanen went into an early December game against the New York Rangers having not recorded a goal in 16 games played.  That game – his 17th of the season – was a milestone of sorts, his 750th game in the NHL.  And when Nicklas Backstrom added a second period goal to one scored by Jay Beagle in the first period to give the Caps a 2-0 lead, it looked as if it would be a happy night for the Caps and Niskanen.  However, Michael Grabner scored with less than a minute to go in the second period to halve the Caps’ lead, and Jesper Fasdt scored mid-way through the third period to tie the game, 2-2.

With less than four minutes left in regulation, the Caps took the lead back, thanks to an unlikely player from an unlikely spot on the ice.  The Caps set up a conveyor belt inside the Rangers’ blue line, Christian Djoos backing off from the top of the left wing circle before leaving the puck off for Nicklas Backstrom circling in Djoos’ wake.  Backstrom did the same, backing off and then leaving the puck for Alex Ovechkin curling out from the circle.  Ovechkin snapped a shot at the Rangers’ net.  That drive was stopped by goalie Henrik Lundqvist, but the rebound popped out to the low slot.  Tom Wilson reached out and swept it to his left, where Niskanen parked himself.  Fighting off Boo Nieves, Niskanen swatted the loose puck behind Lundqvist for what would be the game-winning goal in the Caps’ 4-2 win.  It was also Niskanen’s 50th goal in the NHL.

The Caps had just won both ends of a tough home-and-home set against the Columbus Blue Jackets when they hosted the Detroit Red Wings in the second week of February.  Matt Niskanen came into this game with points in three of his previous four contests.  On the other side, the Wings came into the contest losers of three in a row and were lit up for seven goals in a 7-6 overtime loss to the New York Islanders in the game preceding this one.

When Alex Ovechkin scored just 4:20 into the game, it appeared that the Caps’ good fortune would continue, as would the Red Wings’ woes.  That was until the Wings scored four straight goals over a 26-minute span over the first and second periods.  Matt Niskanen was on the ice for two of them.  The Caps did mount a comeback and tied the game on a power play goal by Nicklas Backstrom with just 16.7 seconds left in regulation to salvage a standings point.  However, Detroit scored in overtime on a Tomas Tatar goal to capture the second standings point.  For his part, Niskanen skated 21:56 without recording a point or a shot on goal (his only shot attempt was blocked).  He had one hit and one giveaway, and he finished minus-2, his only minus-2 game of the season.

Postseason… Matt Niskanen was a minutes-eater in the postseason, and it was a critical element of success for the Caps.  In the 11 games in which he skated at least 24:29, the Caps went 9-2, both losses coming in overtime against Columbus in the opening round.  He skated two games with more than 30 minutes in ice time; Only Seth Jones of the Columbus Blue Jackets had more such games (four; John Carlson also had a pair for the Caps).  And his performance in the “grittership” areas gave support to the idea that some such numbers aren’t that good to have.  In the 13 games in which NIskanen’s combined hits and blocked shots were fewer than five, the Caps were 10-3.  They were 6-5 otherwise.  As far as scoring was concerned, his nine points in 24 games was almost equal to his combined total with the Caps in three previous postseasons covering 36 games (11 points).

With the Caps sustaining a departure of half of their defense the ended the 2016-2017 season (Alzner, Nate Schmidt, and Kevin Shattenkirk) and having to break in rookies at the position to start this season (Christian Djoos and Madison Bowey), his consistency, durability, and steadiness as the season wore on was an important ingredient to the Caps’ success.  It will no doubt continue to be important and valuable as the Caps try to extend their good fortune to the 2018-2019 season.