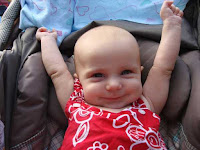 Fans of the Washington Capitals might not have expected the Toronto Maple Leafs to be a particularly formidable first-round playoff opponent, but at least for Game 1, they gave the Caps all they could handle.  The Leafs got out to a two-goal lead before the game was ten minutes old, but the Caps clawed back to tie it, then they won it on a goal from a most unexpected source in overtime to take Game 1 of their series, 3-2.

Toronto scored the first goal of the series on a broken play. Tyler Bozak took a pass from Mitch Marner and skated the puck into the right wing faceoff circle.  From there he fed the puck across to James van Riemsdyk, whose one-timer was blocked into the corner by goalie Braden Holtby.  Van Riemsdyk managed to get the puck back in front between the hash marks where Marner had circled in, and Marner flipped the puck past Holtby’s left skate as he was tumbling to the ice to make it 1-0 just 1:35 into the game.

The Maple Leafs added to their lead eight minutes later.  Jake Gardiner took a loose puck in the left wing circle, backed off into a better shooting position, and using Nazem Kadri as a screen slid the puck through on the open side as Holtby was trying to peek around Kadri on the other side to find the shooter.  The goal was initially waved off for goaltender interference by Kadri, but upon video review it was reinstated.

Washington halved the lead less than three minutes later on a power play.  With two Leafs in the box,  Kevin Shattenkirk and Nicklas Backstrom played catch with the puck on the right side.  Shattenkirk tried to one-time a feed from Backstrom to the net, but his stick broke, and the puck slid off to the left, off a Leaf skate and to T.J. Oshie at the bottom of the wing circle.  Oshie feathered a pass to the low slot, and Justin Williams redirected it past the left pad of goalie Frederik Andersen to make it a 2-1 game 12:24 into the period.

In the second frame, the Caps spent much of the first 16 minutes putting some Caps fans to sleep and inspiring other to express displeasure at what looked like their indifferent play.  But with four minutes left in the period the Caps drew even.  Evgeny Kuznetsov got the play started, skating down the right wing into the Leafs’ end, putting on the brakes, and feeding the puck across to Matt Niskanen entering the zone for a one-timer.  His shot was stopped by Anderson, but not cleanly.  With the puck lying between his pads and unable to find it, Anderson was helpless against Williams darting down the slot and poking the puck the rest of the way over the goal line to make it a 2-2 game.

Game 1 goes to the Caps.  Strap yourselves in folks.  This could be interesting.

1.  Wilson just made a solid, basic, simple play in the end.  He covered the wall to keep the Leafs from chipping the puck out.  He settled it, and most important, he put the puck on net.  If seems self-evident, but too often, a player might look to pass in that situation.  Wilson got it through, and Frederik Anderson, who had an otherwise superb game, seem to go to his knees a bit early, leaving the top near corner open.  And say what you will, that Wilson wouldn’t hit that target against an open net once in 20 tries, he did it here…because he shot the damn puck.  Oh, and it was Wilson’s first career playoff goal.  Not a bad way to get it.

2.  It was not that Braden Holtby was not sharp early.  He was a bit of a victim on the first goal, and he probably would like to have the Leafs’ second goal back.  But despite the fact that his teammates allowed Maple Leafs to set up a little too freely in front, he grew sharper as the game went on.  Late, he might have been the best Capital on the ice.  He stopped the last 26 shots he faced.

3.  Every Maple Leaf but Morgan Rielly had a shot on goal, but the distribution might not have been quite what Toronto wanted.  Auston Matthews had just one, none in the last 51 minutes, including overtime.

4.  The same might be said for the Caps.  They had 44 shots on goal, but Alex Ovechkin had just one of them, none in the last 53 minutes, including overtime.

6.  Think this is the playoffs?  The teams combined for 99 hits.  Toronto, allegedly the smaller club, managed to record 47 credited hits of their own.  But half of the hits recorded by Toronto came from three players – Matt Martin (10), Leo Komarov (8), and Roman Polak (6).  For the Caps, every skater except Nicklas Backstrom was credited with at least one of the 52 hits the club had.  Matt Niskanen led them with seven.

7.  Dmitry Orlov did not have a point, but he had a solid game.  Four shots on goal, eight shot attempts, four hits, two takeaways, and three blocked shots in 25:22 (tops in ice time for the Caps).

8.  Evgeny Kuznetsov had the best night, percentage-wise, in the faceoff circle, going 8-for-10.  Can’t say that’s happened often this season.  He also showed a creativity that was not rewarded much in this game (he did have an assist), but he could be a big factor as this series goes on.

10.  Getting three goals matters.  This was the 20th time in the Rock the Red era that the Caps scored three or more goals in a playoff game on home ice.  They are now 15-3-2 in those games.

It would be fair to say that this was one of the worst games the Caps played in the 2017 portion of this season.  Barry Trotz said in the post-game press conference that he was not happy with the first 30 minutes.  But he also pointed out that there was no panic, and he was happy to see that.  And that brings us to the “glass-half-full” interpretation of this game.  The Caps played poorly for 30 minutes, faced a team that came out hard early, and squeaked out a win.  And win is the only meaningful metric at this time of year.  The Caps certainly can play better…a lot better.  The Maple Leafs might wonder if they have that next gear in them.  It will make the first ten minutes or so of Game 2 an interesting thing to watch.

Posted by The Peerless at 11:07 PM No comments:

Now, I want you to remember that no bastard ever won a hockey game by taking a hit for his team. He won it by making the other poor dumb bastard take a hit for his team. Men, all this stuff you’ve heard about the Caps not wanting to fight, wanting to stay out of the contest, is a lot of horse dung. Caps traditionally love to fight. All real Caps love the sting of battle. When you were kids, you all admired the champion marble shooter, the fastest runner, the big league ball player, the toughest boxer. Caps fans love a winner and will not tolerate a loser. Caps play to win all the time. I wouldn’t give a hoot in hell for a man who lost...and laughed. That’s why this spring Caps have never lost and will never lose a playoff series.  Because the very thought of losing is hateful to Capitals.

Now... a hockey club is a team. It lives, eats, sleeps, checks as a team. This individuality stuff is a bunch of crap. The bilious bastards who wrote that stuff about individuality for NHL Network don’t know anything more about real hockey games than they do about fornicating.

We have the finest food and equipment, the best spirit and the best men in the world. You know, by God I actually pity those poor bastards we’re going up against. By God, I do. We’re not just going to check the bastards, we’re going to cut out their living guts and use them to tape the blades of our sticks. We’re going to hit those lousy Maple Leaf bastards by the bushel.

Now, some of you boys, I know, are wondering whether or not you'll chicken out under fire. Don't worry about it. I can assure you that you will all do your duty. The Maple Leafs are the enemy. Wade into them. Spill their blood. Check them into the boards. When you put your hand into a bunch of goo that a moment before was your best friend's face...you'll know what to do.

Now there’s another thing I want you to remember. I don’t want to get any messages saying that we are holding our position. We’re not holding anything. Let Toronto do that. We are advancing constantly, and we’re not interested in holding onto anything except the enemy. We're going to hold onto him by the nose, and we're going to kick him in the ass. We're going to kick the hell out of him all the time, and we're gonna go through him like crap through a goose.

There’s one thing that you men will be able to say when you get back home. And you may thank God for it. Thirty years from now when you’re sitting around your fireside with your grandson on your knee and he asks you, "what did you do in the great National Hockey League," you won’t have to say, "Well, I shoveled shit in DC."