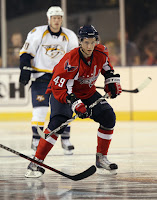 “It is never too late to be what you might have been.”
-- George Eliot

Frankly, we never thought we would be doing a preview on Stan Galiev.  Drafted in the third round in 2010, his career seemed to have stalled in 2014 after spending two seasons shuttling between the Hershey Bears in the AHL and the Reading Royals in the ECHL.  While he performed well with the Royals (28 goals in 60 games over two seasons, plus another five in 13 post season games), he did not impress with the Bears (three goals in 33 games over two seasons; no playoff appearances).  Making it all the way to the NHL seemed a bridge too far.

Last season, however, Galiev took a step forward.  He started the season with the Bears, but he got off to a sluggish start with just one goal and one assist through his first 11 games.  Then he took off.  Galiev recorded eight goals in his next eight games that served as a springboard to what would be a big season.  He finished with 25 goals in his last 56 games after going without one in his first 11 games, and he ended the season as the league leader in power play goals with 15.  He added a goal in five playoff appearances.

On the way through his AHL season, the shuttle took him up, not down the organization ladder.  With the season winding down, the Caps lost a trio of forwards in quick succession.  Jay Beagle suffered a shoulder injury in mid-March that would cost him the last 14 games of the regular season.  Eric Fehr was lost to an upper body injury in early April.  Tom Wilson took a puck to the head trying to block a shot against the Detroit Red Wings.

With the forward ranks thinned, Galiev was called to Washington on April 7th.  He made his NHL debut against the Boston Bruins the following day.  He logged just under ten minutes of ice time, and while he did not record a point, he was something of a good luck charm as the Caps shut out the Bruins, 3-0.

Galiev’s first NHL point would come in his second game, the regular season finale against the New York Rangers.  The game got out of hand early for the Caps, the Rangers taking a 3-0 lead after less than 23 minutes were played.  The Caps got within a pair in the second period, but the Rangers added an empty net goal with less than two minutes in regulation.  That was not all for the scoring, though.  With the clock ticking down to a half minute to play, Brooks Orpik took a pass from Mike Green and skated the puck deep into the Ranger zone.  From below the goal line he sent the puck across to Galiev in the corner to the left of goalie Henrik Lundqvist.  Galiev sent the puck back out to Michael Latta and headed to the net as Latta fired.  The shot went wide, but the puck caromed to the other side of the net where Galiev was approaching after having stumbled and then knocked to his knees by Keith Yandle.  Galiev got inside position, knocked the puck down, pulled from forehand to backhand, and tucked it inside the near post to light the lamp for the first time.

Last season certainly is something on which to build.  Galiev has not lacked a skill set – he recorded 65 goals in 151 games in junior hockey.  The question has been whether he could stand the physical grind of a regular shift and a long season.  What he showed last season at Hershey in leading the league in power play goals was an opportunistic streak.  Ten of his 25 goals were the games’ first goal – tops in the league – and six of his goals were game-winners, putting him in the top-dozen in the AHL.

Cuz, he’s not going to get those power play minutes with the big club, even if he makes the roster.  And that’s not a certainty.  Two games isn’t much of a resume, at least not enough to write his name in pen above his locker.  He was just sixth on the Bears in even strength goals.  He appeared in just five of the Bears’ ten postseason games, suffering an upper body injury in a series-clinching win against Worcester in the first round.  Durability is something he is going to have to contend with at this level.  Oh, and Peerless...think that 41 goals per 82 games thing in that chart means much?

The Big Question… Can Galiev make another big step upward?

Stan Galiev was a prospect that looked to have been passed by.  Andre Burakovsky and Evgeny Kuznetsov looked to be the young forwards to watch as last season progressed, and one had the feeling that Galiev might not be extended a new contract when his entry level deal expired.  His big year in Hershey and snapshot, two-game trial with the Caps earned him a two-year deal that he signed in July.  The two-way deal (in the first year of the contract) gives the team some flexibility with regard to his eligibility for reassignment to Hershey.  However, he has an opportunity to make the club out of training camp with Nicklas Backstrom’s status uncertain.  To the extent he gets ice time, it would seem likely, even with Backstrom out of the lineup, that he would be getting fourth line minutes.

There is a bit of urgency attached to the question of whether he can make another big step upward.  He has a winger breathing down his neck in Hershey in Jakub Vrana, another player with an impressive skill set whose career arc would seem to be that of “scoring line winger” in the next few years.  Even with the likelihood of getting fourth line minutes if the opportunity presents itself early in the season, he cannot have the same sort of slow start he had in Hershey last season.  It could be a cue to return him to the Bears, and if he finds himself spending the large part of the season in Hershey, turning 24 years old in January, he could find himself being caught and passed by on the depth chart again.  He might not have a better opportunity to show what he can be. 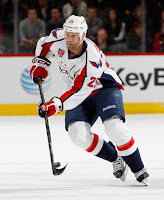 Last season, fans of Washington Capitals’ forward Jason Chimera created an ice-blue cheetah mascot head to honor the player that years earlier earned the nickname, “Ice Cheetah.”  One of the fastest players in the NHL, Chimera has built a 15-year career largely on his ability to fulfill his team’s need for speed.

Over his last eight seasons, though, he was also known for a sawtooth trend in his goal production.  Starting with the 2007-2008 season, his goal progression from year to year was: 14-8-15-10-20-3-15-7.  Last season – that of the seven goals in 77 games – continued that odd production trend.  Last season looked like a long stretch of desert with the intermittent shrub.  After scoring a goal in his fifth game, Chimera went 13 games without one.  After breaking that drought, it was ten games without a goal.  Ten more without a goal.  It was like that all season until his 71st game when he had his only two-goal game of the season, that in a 5-2 win over the New York Rangers on March 29th.

As it was, Chimera recorded points in only 14 of the 77 games in which he played, eight of those against teams that did not reach the playoffs.  He did not record a goal against a team that would be playoff-eligible until his 50th game of the season when he had a goal in a 3-2 win over the Anaheim Ducks.

Odd as the season’s outcome was in perpetuating his goal-scoring trend, one might have seen it coming given his possession numbers.  His Corsi-for percentage at 5-on-5 (47.3) was his second worst since the 2005-2006 lockout, and his Corsi-relative (minus-5.5) was his worst over that span by a significant margin (numbers from war-on-ice.com).  It was the fourth time in five full seasons with Washington that he was in minus territory in his Corsi-for and Corsi-relative numbers (all numbers from war-on-ice.com).

Say what you want about his odd regular season trend over the past eight years, but he has been a dependable playoff performer in a limited role.  In five postseasons with the Caps he has 11 goals in 56 games, a 16-goal pace per 82 games.  Compare that with his 12-goal pace per 82 games over his five-plus regular season career with the Caps.  More to the point, he has seven of his 11 career postseason goals in 26 postseason games against the New York Rangers (a 22-goal pace per 82 games).  He was 1-2-3 in the seven game series against the Rangers last spring, and his 3-4-7 scoring line overall left him tied for third in goals and points for the Caps in the playoffs.  It suggested that despite the regular season production difficulties he had, Chimera still had something in the tank.

Even in extra capacity tanks, the gauge hits “empty” at some point.  With so much of his game dependent on speed, the calendar becomes a bit of a concern.  He will turn 37 next spring (hopefully, when the Caps are dispatching whoever it is they are playing in the second round).  If he loses a step, he does not have a resume to suggest he will make up for it with soft hands or guile (like that word, cuz?).  The season about to begin is supposed to be his “up” year in this weird cycle.

The Big Question…. Up?

No, not the animated Disney movie, the fact that 2015-2016 should be an “up” season in the odd trend that has been Jason Chimera’s production the last eight seasons.  Over the course of those last eight seasons, Chimera’s scoring line in his “up” years averaged 16-21-37 per 82 games.  In his “down” years he averaged 9-17-26.  Never an especially efficient shooter (he has not averaged more than 10 percent shooting since shooting 13.4 percent in 80 games with Columbus in 2005-2006), Chimera averaged 8.6 percent shooting in his “up” years, 6.0 percent in his “down” years.  Part of it might be the act of shooting, itself.  He averaged 2.3 shots per game in his “up” years, while averaging just 1.8 percent in his “down” years.  While it does not seem much on a per-game basis, it is almost a 20 percent drop in shots from up years to down years.  The oddest fact attached to his trend might be this, though.  In five full seasons with the Caps, Washington is 17-1-1 in games in which Chimera scored a goal in his three “down” years, 16-10-6 in games in which he scored goals in his two “up” years.

Will he get that extra ice time, and with whom will he get it?  The two linemates with whom he had the most 5-on-5 ice time last season – Joel Ward and Eric Fehr – departed in the offseason to San Jose and Pittsburgh, respectively.  Given the uncertainty at center on the top two lines with the possible absence of Nicklas Backstrom to start the season, Chimera might start the season with Brooks Laich centering his line, or perhaps Marcus Johansson.  When things settle out, it might be Andre Burakovsky centering that line.  It could be a line that is, as a group, somewhat quicker than the Chimera-Fehr-Ward line employed last season, although it might not be quite as “heavy” a line.  One can imagine a line that could make use of Chimera’s speed, and if so, things would be looking “up” for Chimera in 2015-2016.

Photo: Doug Pensinger/Getty Images North America
Posted by The Peerless at 12:00 AM No comments: