The Peerless Prognosticator is ON THE AIR!!! -- Game 3/Eastern Conference Quarterfinals: Bruins at Capitals, April 16th

The Washington Capitals return home from Boston and their split of Games 1 and 2 of the Eastern Conference Quarterfinals, hoping to feed off what promises to be a roaring crowd at Verizon Center to take the lead over the Bruins in the series on Monday night.

It has been a low-scoring series so far with a total of four goals scored, two by each team. Two goals for each team? In six periods and three overtime periods? It almost seems like a different game altogether from the one they are playing in Pennsylvania…

-- The Caps have two goals over a total of six periods and three overtime periods, so do the Bruins. The Flyers and Penguins have combined for ten individual periods in which one of them scored two goals.

-- The Flyers have twice scored in a period the number of goals the Caps and Bruins have combined for in the entire series so far.

-- The Flyers Claude Giroux has as many goals on his own – four – as the Caps and Bruins have combined to score.

-- Marc-Andre Fleury allowed as many goals on the first 24 shots he faced (two) in the Flyers/Penguins series as Braden Holtby has allowed on 74 shots faced.

-- For Ilya Bryzgalov, he allowed as many goals as Holtby on the first six shots he faced…in the series.

-- The Caps and Bruins have combined for four goals. The Flyers have five power play goals of their own.

Who would have thought that a series featuring a team that finished tied for second in scoring in the regular season, and another one featuring one of the most prolific goal scorers of this or any era would have a total of four goals scored in more than 144 minutes of hockey?

But look at the “real time” stats for the Caps. Blocked shots…first. Hits…sixth. Faceoffs…over 50 percent. Sure, it’s only two games, but it is two games on the road, and a team with any designs on a deep run has to start that run well.  The Caps have tended to the little things and done well.

The start for the Caps is not just a good one, it is borderline historic in an important respect. Only once in 35 playoff series have the Caps allowed fewer than the two goals they have allowed so far. That was last year against the New York Rangers, when Michal Neuvirth held the Rangers to a single goal in Games 1 and 2. In only two other series – in Round 1 in 1991 and Round 1 in 2001 – did the Caps equal this two-goals allowed result in Games 1 and 2. The Caps are 2-1 in series in which the allow two or fewer goals in the first two games of the series, and the loss came to the Penguins in 2001, a team against which it hardly seems to have mattered whether the Caps allow two or ten…they lose those series.

Meanwhile, the Caps are having difficulty generating shots, at least from the players who need to contribute. The headline is that Alex Ovechkin has only four shots in two games. He is wearing Boston defenseman Zdeno Chara like a six-foot, nine-inch cloak. But the Caps are going to need secondary scoring before this series is over, and that means guys like Jason Chimera (20 goals in the regular season, two shots in series so far) or Mathieu Perreault (16 goals, no shots so far). 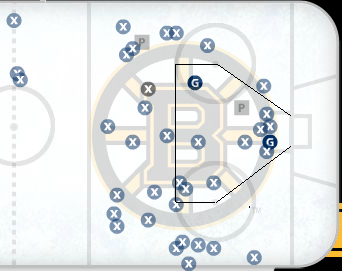 …but they need to improve on this even more. This is where players such as Chimera, Troy Brouwer (who did get a goal from in close), Joel Ward, and Brooks Laich are going to have to introduce themselves to the series in a bigger way. As nice a story as it is that Braden Holtby has come up strong in Games 1 and 2, he can’t be the story in seven games – few goalies can be, at least in a good way. The lunch pail guys are going to have to step up, too.

The Peerless' Players to Ponder:

For the Caps it is a matter of making Chara do a variety of things -- making him retrieve the puck in his corner, making him skate, making him work for the duration of his shift. Chara is a minutes eater (averaging 27:45 of ice time so far in the series) and is among the fittest athletes in the sport. But he is hauling a lot of mass, too. And if the Caps can make him work shift in and shift out, cracks might appear in his formidable armor.

Mike Green at times looks as if he is this close to breaking the longest streak of his career without a goal (27 games) since the 2006-2007 season. This could be especially important on the power play, where he leads the Caps so far in average ice time 3:42. The Caps need to get some greasy goals, but it is easier to do that when defensemen are getting the puck to the net. And Green having the ability to score on his own shows that he has the capacity to do this.

1. Defend the House. Home ice advantage matters less in the NHL in the playoffs than just about any other team sport you care to name. And Boston is a team that can impose its will in just about any arena in which it plays. The Caps cannot have the Bruins being Bruins in the first ten minutes. That doesn't argue for a timid approach; it argues for doing what they did in Boston. Match push for push, hit for hit.

2. Make the Bruins Wallflowers. One of the things the Caps have done well is keep the Bruins to the outside. It has been the best example of the all-for-one and one-for-all defense that has allowed Braden Holtby to avoid seeing flurries of shots. Keeping up that level of effort will be important as a way to negate Boston's scoring depth at forward.


3. Feed off the Crowd; Don't Play to It. It goes without saying that the Caps cannot be cute. Now more than ever. Cute was not in their repertoire in Boston, and they got the job done. They have to play a similar game, not one of "entertaining" the fans. Nothing entertains like a win.

In the end, the Caps have played well in this series so far, but the fact remains that the two games at Verizon Center this week still could be the last hockey the Caps play in Washington this season. That reduces each game to its own little universe. The team that can keep its focus with the bounds of those 60 minutes of this game is the one that is likely to come out with a win in the end. The Caps have done a fine job of that so far, but this series has just begun.

It would be nice to win this one.