The Peerless Prognosticator is ON THE AIR!!! -- Game 38: Panthers at Capitals, January 4th

The Washington Capitals return to the grind of the regular season after their thrilling 3-2 win over the Chicago Blackhawks on New Year's Day as they host the Florida Panthers on Sunday afternoon at Verizon Center.  If ever there was going to be a “trap” game, this is it for the Caps.  After spending a month with the cameras of EPIX recording their preparation for the Winter Classic, for all the run up to the game itself, and finally the climax of the month – the game itself and the last-minute win before more than 42,000 fans and a national television audience – the Caps host Game 38 of the season against an opponent without the pedigree of the Chicago Blackhawks.

That team also happens to be a very difficult one to play against.  Despite not having a point scorer in the top-100 of the league, despite not having a goal scorer among the top-20 (and only two among the top-65), and despite being a bottom-five team in scoring offense and power play, the Panthers found themselves on the cusp of the top-eight in the Eastern Conference, just one point behind the New York Rangers for eighth place and just two points behind the Capitals for sixth place through Friday's action.

How do they do it?  They are a pain in the backside for 60 minutes (or more).  Yes, they don’t score much (2.19 goals/game), but they do not allow much, either (2.44/game).  What it means is that playing the Panthers is a frustrating experience.  Almost half of their games so far have ended with four or fewer total goals being scored (17 of 36), and their record in those games is very good (9-3-5).

Individually, no one Panther is likely to strike much fear in their opponents.  Nick Bjugstad leads the club in goals (14) and points (22).  No team has a leading scorer with fewer points than Florida (Jaromir Jagr for New Jersey and Eric Staal for Carolina each had 22 points after Friday night’s action).  Bjugstad, a 19th overall pick in the 2010 entry draft, is almost certainly going to eclipse his career high in goals shortly (16 in his rookie year last season) and is on a pace to top his career best in points (38, also set last season).

Bjugstad’s performance has earned him a brand new six-year contract worth $24.6 million that will start next season.  In terms of his recent performance, Bjugstad has points in three of his last four games (2-1-3) after going five contests without one.  Eight of his 14 goals and 13 of his 22 points have come in road games this season.  In six career games against the Caps, Bjugstad has one assist and is a plus-2.  Oh, and a game-winning trick shot.

When Aaron Ekblad was taken first overall in last summer’s entry draft by the Panthers, it was hardly a stretch to think he would start the season with the big club, a team that was returning only one defenseman who reached the 20-point mark with the team (Brian Campbell: 7-30-37).  Ekblad did start the season with the parent club, and he has provided no reason to think it was anything but the right decision.

So, who is hot for the Panthers?  Those of you saying, “Jimmy Hayes,” pick up your prize in the lobby.  Florida has 14 goals scored over their last five games, and Hayes has four of them (4-1-5).  The recent explosion in production has Hayes matching his career best in goals scored (11, set last season in 53 games) and points (18, also last season).  Here is the thing with Hayes, though.  He has been on ice for 15 goals at 5-on-5 in 28 games played, third highest among Panther forwards and highest on a goals-per-game basis among forwards playing in at least 20 games. 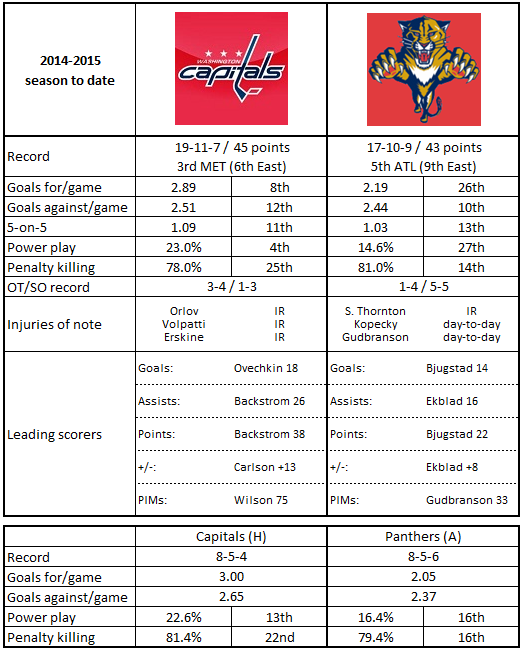 1.  Florida is among the worst starting clubs in the NHL.  With 20 first period goals they rank 18th, ahead of only Buffalo (15) and Montreal (14).  Only 16 times in 36 games have they scored first; only five teams have done so fewer times.  They are tied for 10th in the league in leads taken into the first intermission (10 times).

3.  Despite being among the lowest scoring teams in the league, they do score.  Only once this season have the Panthers been shut out, a 1-0 loss to the Ottawa Senators in Game 3 of the season.

4.  A big part of Florida’s scoring problem is their power play.  Not only is it rather ineffective (14.6 percent; 27th in the league going into Saturday’s games), but it gets very little in the way of opportunities.  Only Boston has had fewer man advantage opportunities (91) than the Panthers (110).

5.  Underlying it all, Florida is not a bad possession team.  They rank ninth overall in Corsi-for percentage at 5-on-5 (52.2), and they do it while possessing the seventh fewest Corsi events per 60 minutes (combined with opponents) per 60 minutes.  They do “dull” very well. War-on-ice .com

1.  When the Caps beat the Chicago Blackhawks on New Year’s Day, it marked the team’s third straight home win.  It is their longest home winning streak of the season to date.

3.  No team in the league has taken a lead into the third period of games more frequently than the Caps.  In 19 such instances they are 16-1-2.  Only Montreal (18-1-0) and Pittsburgh (17-1-1) have more wins when leading at the second intermission.

4.  Blowouts favor the Caps.  They have the third best winning percentage in games decided by three or more goals (.750/6-2).

5.  Possession by period has been a bit of an issue for the Caps, particular late in games.  Their Corsi-for percentage at 5-on-5 in the first period of games ranks 13th in the league (51.3), and their Corsi-for percentage in the second period of games ranks seventh (52.2).  In the third period they rank 21st (49.2). http://war-on-ice.com/teamtable.html

If you want to know just how it is that the Panthers have lingered on the edge of playoff contention, look no further than their number one goaltender.  Roberto Luongo ranks tenth in the league in goals against average (2.22) and eighth in save percentage (.926).   These are fine numbers for Luongo and the Panthers, but then again, they have to be.  Luongo is 11-1-4 when allowing two or fewer goals, but he is just 4-6-3 when allowing more than two.  When one considers that he has allowed more than three goals in just four games this season, it becomes clearer that as Luongo goes, so go the Panthers.  They simply do not have the offense to make up for an off night by Luongo, and they struggle often when he is merely "average."  He will be coming into this game on a mini-hot streak, having allowed only one goal on the last 69 shots he has faced dating back to the third period of a 6-4 win over the Toronto Maple Leafs on December 28th (.986 save percentage).  He is 20-10-2, 2.25, .928, with two shutouts against the Caps in his career.

After earning a spot in the lineup to start the season, then going 3-9-12, plus-5, playing mostly on a scoring line while averaging almost 14 minutes a game in his first 15 games in the NHL, the world was Andre Burakovsky’s oyster.  Then the rookie stumbled, recording only a goal in his next 13 games, going minus-5, and averaging less than 12 minutes a game in primarily fourth line duty.  It appears he might be getting another chance to skate on a scoring line.  He was skating with Nicklas Backstrom and Alex Ovechkin on the top line in Saturday’s practice.  It might be a default option for the Caps, since Tom Wilson and Jay Beagle (among others) have not provided quite the production one might expect from a top line winger.  This might be a long process with March 2nd in mind.  The Caps have lacked a consistent winger on that top line to match with the Ovechkin-Backstrom pair, and if Burakovsky does not work out, this might be what the Caps target at the trading deadline.

When the Capitals won the 2011 Winter Classic in Pittsburgh, they followed it up by going into a six-week funk, compiling a 6-6-5 record over their next 17 games and scoring only 33 goals in the process.  Only twice in that 17-game span did they score more than three goals.  In those 17 games they were shut out three times, twice by 1-0 scores, and one of those in overtime.  That is what the Caps must guard against coming out of the win on Thursday.  And, the Panthers are just the sort of team that can put a team in a funk with their station-to-station, clog-things-up style of play.  It will be a measure of the maturity of this team to set aside the fireworks and hoopla of New Year’s Day and get back down to business in a season in which the Caps are far from certain of reaching the playoffs.