The Peerless Prognosticator is ON THE AIR!!! -- Game 69: Jets at Capitals, March 10th

The Washington Capitals wrap up their short two-game home stand on Sunday night against the Winnipeg Jets at Capital One Arena.  After shutting out the injury-plagued New Jersey Devils, 3-0, on Friday night, the Caps will be stepping up in weight class to face a Jets team that leads the Central Division standings and is on the short list in the discussion of teams that could come out of the Western Conference in the Stanley Cup final.

Washington will be going into this game aiming to win a seventh consecutive game, which would match their longest of the season, that in Games 19-25 to close the month of November.  The Caps will also be looking to extend their home winning streak to five games and their points streak on home ice to eight games.

On the other side, the Jets will be wrapping up a four-game road trip with their visit to Washington.  They have won two of three games on the trip so far and three of their last four overall.  Still, the last five weeks have not been especially successful for Winnipeg, which has a 6-7-2 record in 15 games since February 5th.

Winnipeg has had respectable offensive output over those 15 games with 47 goals (3.13 per game), and a lot of that – more than 40 percent of it, in fact – is due to Blake Wheeler.  In 15 games played, Wheeler has had a hand in 19 of the team’s goals (9-10-19).  His participation in 40.4 percent of Winnipeg’s goals over the past 15 games is a bit higher rate than his having a hand in 36.1 percent of the team’s 230 goals scored in 67 games this season (19-64-83).  Wheeler, who averaged 24 goals and 61 points per 82 games over his first nine seasons with Boston and Atlanta/Winnipeg, has taken quite a leap in production the last two seasons, especially in his assist totals, a reflection of how deep a scoring team the Jets have around him.

Last year, he recorded a typical 23 goals in 81 games, but he added 68 assists.  This year, he is on a pace to hit 23 goals once more, but the 64 assists he has going into Sunday’s game puts him on a pace for 78 assists and 101 points, which would be the first 100 point season of his career.  And this season, when Wheeler scores, the Jets win.  Winnipeg is 14-1-1 in the 16 games in which he recorded a goal.  He is one of three players this season to have recorded a game with at least four goals (teammate Patrick Laine and Arizona’s Brad Richardson being the others), turning the trick last Sunday against the Columbus Blue Jackets in a 5-2 win.  Oddly, it is his only multi-goal game this season.  Wheeler is 5-13-18, plus-5, in 34 career games against Washington.

Jacob Trouba is the only Jet defenseman with at least ten points in the last 15 games and only one of 15 defensemen to have logged ten or more points since February 5th, when the Jets’ 6-7-2 run started.  Trouba has had an interesting career for a player who just turned 25 years of age.  He was the seventh defenseman taken in a 2012 entry draft that was heavily loaded with defenseman picks at the top of the first round; eight of the first ten picks that year were defensemen, and Trouba was taken as the ninth-overall pick (Caps fans will remember that draft as the one where the Caps snapped a string of seven straight defensemen picked with their selection of Filip Forsberg with the 11th overall pick).  After spending a year at the University of Michigan after being drafted by the Jets, he jumped straight to the big club for the 2013-2014 season, finishing second in goals among rookie defensemen (10; Torey Krug has 14) and tied for third in points (29).

Trouba’s production tailed off a bit the following two years, and then, during training camp for the 2016-2017 season and without a contract as a restricted free agent, he requested a trade because he wanted to play on the right side and did not think that was going to happen in Winnipeg.  He missed the first month of the season before signing a two-year/$6 million contract. It seemed to agree with him, as he would go on to post a career-high 33 points in just 60 games.  Last season, Trouba was limited to 55 games due to a lower-body injury, a concussion, and an ankle injury, leaving the Jets with getting 115 games from Trouba over the two years of that deal.  And that brought him to another contract impasse that was settled by an arbitrator for one year at $5.5 million.  When this deal is up, Trouba, who already has a career-high 38 points and a plus-15, will once more be an arbitration-eligible restricted free agent.   In six career games against the Caps, he is 0-1-1, even.

Patrik Laine is the flashy goal scorer, Blake Wheeler is the slick all-around offensive player, and then there is Brian Little.  No player in Atlanta Thrashers/Winnipeg Jets history has played more seasons or appeared in more games than Little (12 seasons and 821 games).  Only Ilya Kovalchuk has more goals in franchise history (328) than Little (214).  Only Kovalchuk and Wheeler have more points in team history (615 and 578, respectively) than Little (515).  On February 22nd, he recorded his 300th assist, becoming only the second player in team history to reach that mark (Wheeler has 387).

It is easy to think of Little as a journeyman middle-six player whose consistency and two-way ability, if not particularly outsized numbers, have contributed to a long career, but it might be remembered that he was taken 12th overall, ten spots ahead of Philadelphia’s Claude Giroux, in the 2007 entry draft.  This season is another example of Little’s consistency across years.  He has 40 points, making it his eighth consecutive full season (not including the shortened 2012-2013 season) with 40 or more points.  His next goal will be his 15th, making it his eighth consecutive full season with at least 15 goals.  That next goal has been a long time in coming, though.  Little is without one in his last 12 games.  He is 12-9-21, plus-3, in 43 career games against Washington. 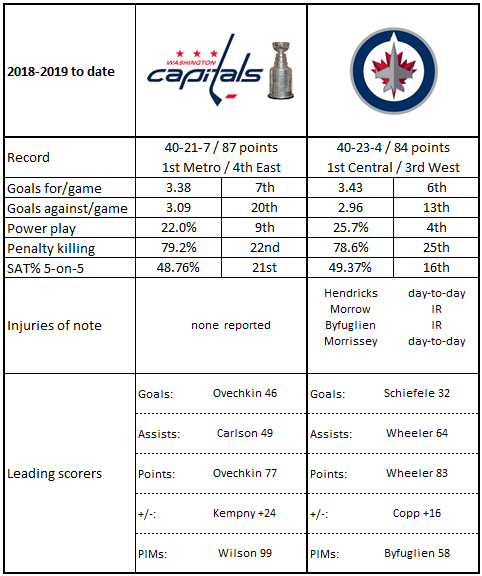 3.  The Jets do well in protecting the puck on the road.  Their 266 giveaways in road games is fifth-fewest in the league and second-fewest among Western Conference teams.

1.  The Caps are rather adept at pulling out wins when allowing the first goal, too.  They rank seventh in winning percentage when doing so (15-13-7/.429).

3.  On the other hand, only five teams have fewer wins than the Caps when trailing after two periods (three).

4.  The Caps are tied for 12th in the league in wins when outshooting their opponents (18), which might not sound impressive except for the fact that they have outshot opponents only 27 times in 68 games.

If Connor Hellebuyck gets the call in goal for Winnipeg on Sunday, it will be his 200th game with the Jets.  He would become only the third netminder in franchise history to reach 200 games played, trailing only Kari Lehtonen (204) and Ondrej Pavelec (379).  He is already second in team history in wins (111) to Pavelec (152).  His goals against average (2.66) is second among goalies with 100 or more appearances for the Thrashers/Jets (Michael Hutchinson: 2.65), and his career save percentage (.915) is best among that group.  This season, he has been almost equally efficient on the road (.911 save percentage) as at home (.910), but he has been less effective, owing to his facing more shots.  His 3.11 GAA on the road is almost a quarter goal per game higher than his GAA at home (2.88).  Hellebuyck has struggled some on the road lately, but not entirely of his own doing.  Over his last ten road appearances, he is 5-5-0, 3.20, .916.  However, he faced quite a bit of rubber over those ten games, 37.9 shots per 60 minutes.  But hey, he's "hockey tough."  In five career games against Washington, Hellebuyck is 3-1-1, 2.13, .933.

He has one point, and he is averaging 17:06 of ice time, less than any Caps defensemen over the last six games except Brooks Orpik (16:06).  But since Nick Jensen was obtained in trade from the Detroit Red Wings on February 22nd, the Caps are 6-0-0.  Perhaps it is coincidence, perhaps not.  The acquisition pushed the less experienced Christian Djoos to the press box and gave the Caps four more minutes of ice time per game than Djoos was giving them (13:03).  That has allowed the team to pare back some of John Carlson’s ice time, from 25:18 per game before the trade to 23:48 in the six games since.

The stability Jensen appears to have provided might be a cause, or it might be an effect of better possession numbers among the defensemen.  Six Capital defensemen have dressed in the six games since Jensen arrived, and the shot attempt-for percentages for each over that span are impressive over the range of situations.  In the four situation categories recorded by NHL.com – SAT ahead, SAT behind, SAT tied, and SAT close – only one defenseman in one category is under 50 percent over those games (Orpik is 47.83 percent in tied situations).  And, there is the odd Jensen number as a Capital: 17.  That is his shot on goal total, most among the six Caps defensemen in the six games since he arrived.  In four career games against Winnipeg, Jensen is 0-1-1, minus-2.

This is probably the last time this season, until the Stanley Cup final, that is can be said that this is a potential Stanley Cup preview on Washington’s schedule.  Neither of these teams would top many lists as a favorite to reach the final – Tampa Bay has been too good for too long this season for any team to challenge them as the leading contender in the East, and there are hotter teams at the moment in the West (the Jets have the fourth-worst record in the West since February 1st).  But these teams are similar.  Each has a high-end goal scorer, each has a deep squad of forwards, each has a goaltender who can steal a game, each can punish an opponent.  Either has the potential to reach the final.  There just is not that much difference between the two, and it serves as a good measuring stick for the Caps as they head down the stretch.