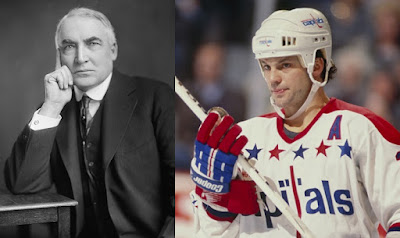 In May 1920, while addressing the Home Market Club in Boston, Warren Harding made the following statement:

“America’s present need is not heroics, but healing; not nostrums, but normalcy; not revolution, but restoration; not agitation, but adjustment; not surgery, but serenity; not the dramatic, but the dispassionate; not experiment, but equipoise; not submergence in internationality, but sustainment in triumphant nationality.”

The “Return to Normalcy” was a theme in the campaign Harding waged in his pursuit of the Republican nomination for President of the United States in 1920.  It was successful; he won the party’s nomination and the general election later that year.  He would serve just over two years before passing away in office, but in his 29 months in office, “normalcy” would not be a word to describe his administration, even if for much of his term in office he would enjoy a favorable reputation.

In his assuming the office with the aim of returning to a period of familiar calm, his serving for such a short period of time, and the evolving perceptions of his time in Washington, Warren Harding’s presidency has a familiar ring to it.  If there is a Washington Capital to whom he and his administration might be compared, it might be to Dino Ciccarelli.

Born and raised in Ohio (the eighth and, to date, last President from the Buckeye State), Harding spent time as a young man working as a teacher and in insurance before settling into a role managing and editing a newspaper in Marion.  His position served as a springboard to politics, starting as a delegate to the Ohio state Republican convention and leading to his first run for elective office, a county auditor position.

Harding lost that first bid for office, but he was successful in his next try, winning election as a state senator.  Four years later, he would win election as Lieutenant Governor of Ohio, a position that allowed him to broaden his political base.  Not so much that it positioned him for climbing to the next rung on the political ladder, though.  He ran afoul of the Ohio political establishment in the next election and ended up not running for any office.  By 1910, though, his star was rising again, and he won the Republican nomination for governor.  He lost in the general election, but took a turn in the party spotlight in 1912 when he gave the nominating speech on behalf of William Howard Taft at the 1912 Republican national convention, then took advantage of the recently ratified 17th Amendment to the Constitution, allowing for popular election of United States Senators, to win election to the Senate in 1914.

His pleasant personality and non-confrontational manner when it came to policy made him an attractive candidate to some for the 1920 presidential election.  The one thing he seemed to have going for him was, as fellow Ohioan Harry Daugherty said, “he looked like a President.”  Looking like a president did little for Harding at the 1920 Republican convention.  On the first ballot he finished sixth of 12 candidates receiving votes.  No one won the necessary number, though, and voting went through nine ballots before Harding finally prevailed on the tenth ballot.

Harding won the general election of 1920, the first sitting senator to win the presidency.  His agenda could be described generally as one intending to reverse the progressive policies of the Roosevelt and Wilson administrations.  In economic policy he signed tax cuts and new protective tariffs into law, and it was under his administration that provision for the President sending a budget to Congress was enacted and the General Accounting Office (now the Government Accountability Office) established.

However, his administration would be consumed by events that were a product of his limited administrative skills. Those shortcomings led to individuals being installed in positions who were more political supporters than capable performers.  It was a recipe for corruption.  The “Ohio Gang”  and their associates would be the source of a number of scandals in the Harding administration, the most famous of which (but not the only one) was the “Teapot Dome” scandal, a bribery incident involving Harding’s Secretary of the Interior that was perhaps the biggest scandal in American politics before Watergate in the early 1970’s.

By 1923 the pressures of the office and his own history of health issues began to affect Harding physically.  It did not prevent him from undertaking a trip, a “Voyage of Understanding” to Alaska and to the west coast (with a stopover in British Columbia; he was the first sitting president to visit Canada) in an effort to restore some of his reputation before embarking on a campaign for a second term in office.  However, on the Seattle stop of his tour he fell ill.  He would travel to San Francisco, nevertheless, but upon his arrival fell ill once more. His conditioned worsened over the next several days, and on August 2, 1923, he suffered a heart attack from which he did not recover, his presidency over after just 881 days, the fourth shortest presidency in American history.

Dino Ciccarelli was an undrafted player, despite scoring 119 goals in 164 games over three  years with the London Knights of the Ontario Major Junior Hockey League (now the Ontario Hockey League).  The Minnesota North Stars signed him as a free agent in September 1979, just before Ciccarelli began his last season with the Knights, one in which he recorded 50 goals in 62 games.

Ciccarelli made the jump to the NHL the following season and in short order became a dangerous goal scorer.  In just his second season he scored what would be a career best 55 goals in 76 games, becoming just the second player in NHL history at the time to record 55 or more goals in a season by the age of 21 (Wayne Gretzky did it twice).  Early in his eighth season with the North Stars, he passed Bill Goldsworthy as the franchise leader in goals scored.  In 1988-1989, his ninth season in Minnesota, he established himself as the franchise leader in goals scored per game (a record he still holds).

However, on March 7, 1989, he was traded with defenseman Bob Rouse to the Caps in exchange for Mike Gartner and Larry Murphy in what would qualify as one of the biggest trades in Caps history.  He did come to the club with issues, as the Washington Post pointed out at the time:

“Ciccarelli comes to the Capitals with some legal baggage. He pleaded guilty to a misdemeanor charge of indecent exposure in an incident outside his Eden Prairie, Minn., home in 1987. He was placed on probation for one year and required to attend counseling. Also, last August, he was convicted of assault, spent a day in jail and was fined $1,000 for a stick attack on Toronto's Luke Richardson last season. No other NHL player had ever received a jail term for an on-ice infraction.”

Any issues that might have accompanied Ciccarelli to Washington were put aside in short order as he scored 12 goals in 11 games to close the 1988-1989 regular season, including a four-goal outburst against the Hartford Whalers in an 8-2 rout on March 18th.  He added another three goals in six postseason games, but it was not enough to lift the Caps past the Philadelphia Flyers in the first round of the playoffs.  The following season, Ciccarelli scored 41 goals for the Caps, becoming the seventh player in franchise history to score 40 or more in a season.  He added another eight in eight games of the 1990 postseason.  However, he suffered a knee injury in Game 2 of the second round against the New York Rangers that ended his season.  This was the postseason in which John Druce would score 14 goals in 15 games for the Caps.  Ciccarelli was matching him goal for goal, game for game, when he went out.  It is just one more in a series of “what if’s” that haunt this franchise, wondering how far the Caps might have gone with a healthy Ciccarelli (the Caps were eliminated in the conference finals against the Boston Bruins).

That 1990 postseason, or more precisely, its aftermath, would affect Ciccarelli, the club, and the future of the franchise for some years to come.  He and three other Capitals – Scott Stevens, Geoff Courtnall, and Neil Sheehy – were accused of assaulting a 17-year old girl on May 12, 1990 in a limousine outside a club in Georgetown.   A grand jury decided not to pursue the case, but with respect to the hockey team, the damage was done.  Scott Stevens signed an offer sheet as a restricted free agent with the St. Louis Blues in July that the Caps chose not to match (the team accepted five first round draft picks as compensation).  Courtnall, who scored 77 goals in 159 games in two years with the Caps (plus six in 21 postseason games) was traded in July to the Blues for Peter Zezel and Mike Lalor, neither of whom made much of an impression on the club.  Sheehy missed the entire 1990-1991 regular season with a broken ankle, then left Washington for the Calgary Flames in free agency.

Except for two postseason games in which Sheehy played in the 1991 postseason, Ciccarelli was the only one of the four to play for the Caps after that incident in May 1990.  He gamely tried to let his performance on the ice serve to rehabilitate his image – he scored 59 goals in 132 games over the next two seasons despite injuries limiting him to 54 games in the 1990-1991 season.  After the 1991-1992 season, though, one in which he was 38-38-76 in 78 games, he was traded to the Detroit Red Wings for Kevin Miller in what has to rank among the worst trades in Caps history.  Miller was coming off consecutive 20-goal seasons for the Red Wings, but he appeared in just ten games for the Caps (without a goal) before he was traded to the St. Louis Blues for Paul Cavallini, who scored just five goals in 71 games in his only season in Washington (Cavallini would be traded for future considerations, which became Enrico Ciccone, who would later be traded to Tampa Bay for Joe Reekie, who played in more than 500 games over nine years for the Caps, so there is that).

Ciccarelli went on to play seven more seasons after leaving Washington scoring 164 goals for Detroit, the Tampa Bay Lightning, and the Florida Panthers.  He retired after the 1998-1999 season with 608 goals, the ninth-most in NHL history at the time.  Today he is one of just 19 players in NHL history with 600 or more career goals and is a 2010 inductee into the Hockey Hall of Fame.

Warren Harding came to Washington and served briefly as President, a well-liked figure during his tenure, but remembered more for the scandals that occurred under his administration.  Dino Ciccarelli came to Washington as an accomplished and formidable offensive player, one who quickly developed a devoted following in his short tenure with the club.  But he is remembered almost, if not as much for an incident off the ice as for his accomplishments on it while a Capital.  In their misfortune, in no small part a product of situations they might have avoided, these two had similar histories in Washington.
Posted by The Peerless at 6:00 PM No comments: