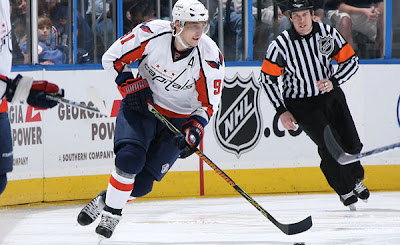 Theme: “Is that all there is?”

Sergei Fedorov is hockey royalty. He is a certain first ballot hall-of-famer. He is also the second-line center on a team that was not especially deep at center this year. Here is perhaps the one number that reflects his age (39) and the Caps’ problems at this position…

In only two of the eight ten-game segments did Fedorov skate in all the games (although he did play in the last 11 games of the year). His longest consecutive games-played streak this year was 25. He played in only 52 games this year, which is unfortunate, because if you look at those pair of ten-game segments in which he played in all the games he was rather effective. In the first ten games of the season he was 3-5-8, +6, and in the ten game segment (the sixth) from February 1st through February 22nd he was 1-7-8, +6.

But take those away, and Fedorov was 7-10-17, -8 in 32 games. It wasn’t quite the performance one might expect out of a second-line center. The best one might say is, “when he did play…”

If there was a disturbing trend in Fedorov’s play as the season wore on it was this – starting with the fifth ten-game segment through the end of the year (spanning 29 games played), Fedorov earned 34 minutes in penalties. He had 16 of those minutes in his last six games.

There were other numbers that fell onto the negative side of the ledger late in the season that were – and are – worrisome. For example, he was minus-7 in his last ten games (plus-4 for the season) and didn’t have consecutive games on the plus-side of the ledger after February 18th. He had a total of 11 even strength points in 32 games after January 19th.
Here is a comparison…

Player 2 in this instance is the Islanders’ Frans Nielsen. We’re not making the argument that Fedorov and Nielsen are interchangeable parts, but it does suggest the need to look at Fedorov’s performance in the cold light of day (or, in this case, “days after” playoff elimination). Is Fedorov a second-line center at this point in his career? If he is a third-line center, what do you pay such a player for that level of performance and the “intangibles” he brings to the team? If you’re wondering, Nielsen’s cap hit is $525,000.

But there is a special consideration here. If the Caps were to re-sign Fedorov, does the 2009-2010 regular season matter? Well, you could argue that while his performance in playoffs hasn’t been especially noteworthy (2-11-13 in 21 playoff games with the Caps over two seasons), he has been , in a manner of speaking, “clutch.” Both goals were scored in elimination games (one against Philadelphia in Game 5 last year and, of course, the series-clincher against the Rangers this year). And while 13 points in 21 games might not sound like a lot, if you look at 2007-2008 total playoff scoring it would have been in the top-20 overall point totals.

Re-signing Fedorov, more than most players perhaps, is going to come down to price. If one didn’t see the name plate, “FEDOROV,” on the back of his jersey, you’d have been hard put to see how he was worth $4 million last year. He didn’t play in enough games, he wasn’t especially productive when he did play (certainly not what one would expect of a second-line center on an elite team), and it isn’t readily apparent that the Caps should expect better numbers next year.

Yet, there are those intangibles he brings. One can’t be too dismissive of a player with Stanley Cups on his resume and almost 1,200 points to his credit. He knows how to play the game, even if his body doesn’t respond as it did ten years ago. This will be one of the interesting plots to follow as the summer moves on, but in terms of his performance this year, it was somewhat disappointing. In terms of value, we can’t conclude that the Caps got value commensurate with his contract, and it might have bound them in ways not unlike the contract held by Michael Nylander, since the club couldn’t trade prospects for a rental at the trading deadline that would have added salary (there was also that matter of the club being at its limit for players under contract).

The opportunity to see Sergei Fedorov play in a Caps uniform has to be a thrill for any Caps fan. However, whatever novelty attaches to that has faded. Fedorov has his Cups; it is time for the Caps to earn theirs. Whether Fedorov is a part of that is a future consideration, but for this year…