If there is something to be said for it being less how you start and more how you finish that defines success, then Week 11 was a successful week for the Washington Capitals.  After a sluggish performance to open the week, the Caps peeled off three wins to close the week, including a thrilling come-from-behind overtime win over the Anaheim Ducks to win the week and finish at the top of the Metropolitan Division. 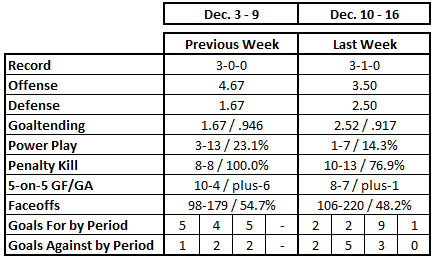 Last season, when the Capitals won the Presidents Trophy with the league’s top regular season record for the second consecutive time, they were 20-9-5 with 45 points after 34 games.  When the lights were turned off at the end of Week 11, the Caps had a 21-12-1 record through 34 games, their 43 points only two behind last season’s pace.  And keep in mind that this season’s team has had to contend with injuries to critical personnel, having lost Andre Burakovsky for 20 games, Matt Niskanen for 13 games,  and T.J. Oshie for six games (and counting).

The Caps are getting healthy again, and it is starting to show.  They did have to scramble to escape with an overtime win on Saturday night to end the week, but they also had a pair of multi-goal wins that gave them multi-goal margins in their last five victories until Saturday.  They also extended their streak of non-losing weeks to eight, posting a record of 17-8-0 over that span. 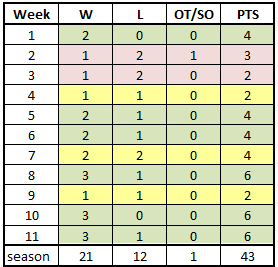 That the Caps would score only a single goal against the New York Islanders to open the week was definitely out of recent character for this team.  Not only was it odd, coming against a team that finished the week 30th in the league in scoring defense, but it would be by the end of the week the only game in the Caps’ last eight games that they scored fewer than three goals, and they scored four or more in six of those other seven contests.

In a way, the stars drove the week.  In addition to Kuznetsov’s leading the team in points for the week, Ovechkin finished the week with a flourish, an overtime game winning goal in the 3-2 win over the Anaheim Ducks, and he finished Week 11 tied for the top spot in the league in goal scoring (23) with Tampa Bay’s Nikita Kucherov.  Backstrom appears to have shaken off that 21-game goal scoring drought.  The pair of goals he recorded for the week made it four goals in six games, all of them in wins.  It might have been a reflection of shooting the puck with more authority, Backstrom finishing the week with ten shots on goal, second to Ovechkin (16), although half of them came against the Ducks to end the week.

The Caps also got offense from the defense.  John Carlson and Matt Niskanen each finished the week 1-2-3.  It was part of a week in which five of the six defensemen to dress recorded points (only Brooks Orpik did not).

Allowing two and a half goals a game is not bad when you consider that only four teams in the league finished the week with a better scoring defense for the season.  But there might have been a bit of uneasiness about taking the foot off the pedal late in the middle games of the week.  That there is even a term “score effects” in the analytical lexicon of hockey suggests this is hardly a Caps problem, but that Caps did allow three goals in the last five minutes of regulation in those two games after taking what looked like comfortable leads against the Colorado Avalanche and Boston Bruins.

The challenge continues to be shot attempts.  The Caps were 48.25 percent in shot attempts-for at 5-on-5 for the week, 20th in the league.  They were worse when ahead, finishing 24th of 28 teams with a 41.80 percent mark (three teams did not hold a lead in Week 11).  That overall number was marginally better than the Caps’ shot attempts-for percentage for the season (47.98), but they are still finding it difficult to climb out of the bottom third in the league in that statistic.  In that respect, one wonders if the recent success is like a “bubble” that will burst at an inopportune time.

It was an interesting week between the pipes for the Caps.  Week 11 opened with Braden Holtby being more or less left on an unprotected island against the New York Islanders, and he gave up three goals on 12 shots in 21:34 before being relieved by Philipp Grubauer.  In relief, Grubauer stopped all 17 shots he faced and continued his slow, but steady climb out of early season struggles.  He finished the week with a save percentage of .899.  When you consider that his save percentage after four appearances was .850 and that his save percentage since is .930 in seven appearances, one would have to think he is rounding into form nicely.  It would be that much better without that six-goal stinker against Colorado in there, which is as many goals as he allowed in the other six of his last seven appearances.

As for Holtby, a bad performance never seems to carry over with him.  He got the call in the last three games of the week, winning all of them and going 2.32/.923.  He still has some work to do to climb into the top of the league’s goaltending rankings, though, finishing the week 20th in goals against average (2.63) and 14th in save percentage (.919; minimum: 500 minutes).  He also has one of the more curious facts attached to his record to date.  No goaltender in the league has played as many minutes as Holtby so far this season (1,485; tenth in the league) without a shutout.

Week 11 was about opportunities, or the lack of them.  Seven chances in four games was the fewest the Caps had, on a per-game basis, since they had just three power play opportunities in two games in Week 4.  In three games win which the Caps had two or fewer man advantages (two against the Islanders, one against Colorado, and none against Anaheim) the Caps had no goals and only three shots on goal (all against the Islanders).  In a more conventional four opportunities against Boston, the Caps recorded their only power play goal for the week (Nicklas Backstrom) and had four shots on goal.

As it was, the Caps were 1-for-7 in power plays and 1-for-7 in shooting (both 14.3 percent) in 10:35 of power play ice time.  Only four Caps recorded a power play shot on goal, Ovechkin leading with three.  Backstrom had two, and John Carlson and Evgeny Kuznetsov had one apiece.  When the Caps failed to get any power play chances against Anaheim to end the week, it marked the first time this season that the Caps did not enjoy a power play on home ice, the first time it happened since they were blanked on chances on home ice in a 6-0 win over the Chicago Blackhawks last January 13th. 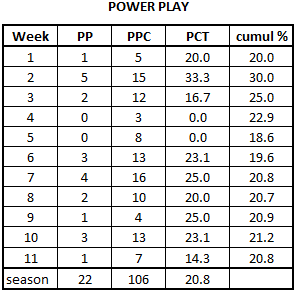 The Caps entered the week on a penalty killing roll, but by the end of the week the wheels were wobbling.  Washington was a perfect 10-for-10 over Weeks 9 and 10, and they shutout the Islanders and Avalanche on four chances to open Week 11.  They kept the Bruins off the board in Boston on their first power play chance in the third game of the week.  However, starting with Patrice Bergeron’s power play strike 4:22 into the second period of the Caps’  5-3 win, Washington was just 2-for-5 on the penalty kill to end the week.

It was an unfortunate end to the week for the penalty killers after coming up with a superb performance against Colorado.  In 6:25 of shorthanded ice time covering four power plays, the Caps did not allow an Avalanche shot on goal (oddly, neither team recorded a power play shot on goal in that game).  Overall, the Caps were, on balance, efficient, allowing only 14 shots on goal in 19:04 of shorthanded ice time.  But that number was influenced by the performance against Colorado. 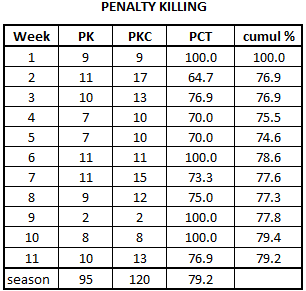 Some weeks are better than others, and then again, some are not.  Week 11 was probably in the “are not” category.  The Caps started well, finishing the first two games of the week over 50 percent, but getting schooled in the circle by Boston (42.2 percent) and finishing one under 50 percent against Anaheim (24-for-49).  Overall, the lack of success extended to zone performance, the Caps under 50 percent in both the offensive (46.2 percent) and defensive (46.8 percent) zones for the week.

The individual performances were uneven as well.  Among the four Capitals taking at least ten draws for the week, Nicklas Backstrom (50.7 percent) and Jay Beagle (51.1 percent) were above water, while Lars Eller (47.7 percent) and Evgeny Kuznetsov (48.1 percent) took on water.  It didn’t help that everyone else was just 3-for-12 (25.0 percent). 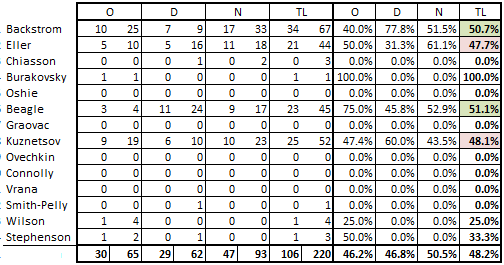 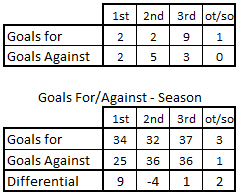 Here was another instance of it being more how one finishes than how one starts.  For the week, the Caps held their own in the first periods of games, fighting to a 2-2 draw overall in goals.  They sagged in the second periods of games with a minus-3 goal differential, but they dominated the scoring in the third periods, outscoring their four opponents by a 9-3 margin.  Those nine goals included two third period goals against Anaheim that wiped out a 2-0 Ducks lead and allowed the Caps to scratch their way into overtime, where Alex Ovechkin ended it with his 21st overtime game-winning goal, extending his league record.

Week 11 presented both an opportunity and a challenge for the Caps.  Four games meant eight available points to bank in trying to climb up the standings, and getting six of those available points was welcome.  The challenge was putting wins in the bank in a week in which they would play at home twice before embarking on a four-game road trip around Christmas starting next week.  Consider that a challenge met, the Caps finishing the week on top of the Metropolitan Division, two points ahead of both New Jersey and Columbus.  Given the tightly wrapped nature of the division – eight teams were separated by eight points at week’s end – getting those wins and points was especially important before heading out on the road.