“Right now I'm having amnesia and deja vu at the same time... I think I've forgotten this before.”
-- Steven Wright 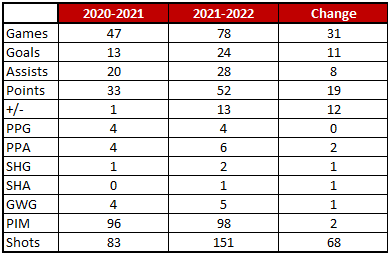 Cheerless’ Take… On the other hand, fifth in goals among eight defensemen appearing in at least ten games (four), worst plus-minus among defensemen by a country mile (minus-15, compared to minus-4 for Dennis Cholowski), sixth in shooting percentage among defensemen (4.4, third lowest of his career), 16:55 in ice time per game (lowest of his career), 0.62 takeaways per game, fifth among six defensemen playing in at least 15 games, fourth in missed shots (45), tied for third in goal against on-ice at even strength (57), worst on the club in even strength goal differential on ice (minus-13).  And, he might have been the most “sheltered” of defensemen with 58.4 percent offensive zone starts, highest among defensemen playing in more than one game.

Odd Schultz Fact II… Washington was 12-3-1 in games in which Schultz did not record a shot on goal.

Odd Schultz Fact III… Schultz’ first goal of the season, the game-winning goal against the Rangers on Opening Night, was not all that unusual.  He has two career goals against New York.  Those would also happen to be the only career goals he has scored against Metropolitan Division teams (2-7-9, minus-3, in 23 games).

Game to Remember… October 13th vs. New York Rangers.  Justin Schultz came into the season with ten career game-winning goals.  He made it 11 with a goal mid-way through the second period on Opening Night against the Rangers.  On a power play, the Caps worked the puck around the perimeter, Alex Ovechkin skating the puck into the offensive zone before feeding Schultz in the middle just inside the blue line.  Schultz fed Evgeny Kuznetsov, who returned the puck to Schultz for a one-timer that appeared to deflect off the stick of Mika Zibanejad before sailing past goalie Alexandar Georgiev on the blocker side to make it 2-0, Caps.  Washington went on to win the opener, 5-1.


Game to Forget… April 16th at Montreal.  How does one merit a forgettable game when your team steamrolls the opponent?  Well, being on ice for every goal scored against would qualify.  When the Caps beat the Canadiens in Montreal in mid-April, 8-4, Schultz was on ice for all four goals scored against.  He did record a goal on a power play, leaving his rating at minus-4, his worst of the seaaon and the sixth minus-4 game of his career.  The odd thing here is that while he suffered on the defensive side of the puck, he did manage to record four shots on goal (and a goal) and eight shot attempts in 16:38 of ice time.  It did not seem quite fair, but the hockey gods are not always fair.

Postseason… Schultz has a postseason that was arguably an improvement over his regular season (1-2-3, plus-2, he and Trevor van Riemsdyk the only defensemen with plus ratings in the first round loss to Florida).  He also ranked second among defensemen in takeaways per 60 minutes (2.65) to Dmitry Orlov (2.72).  And this despite a reduction in ice time (15:05 per game).

Looking Ahead… Schultz is an unrestricted free agent.  Among eight defensemen with cap hits from $3.5 to $4.5 million (Schultz’ cap hit was $4.0 million) and age 27-35, Schultz was tied for fourth in goals scored last season, second in assists, third in points, seventh in plus-minus rating, and sixth in ice time per game (source: capfriendly.com).  Are those numbers enough for the Caps to consider re-upping him on a multi-year deal (he will be 32 years old on Opening Night next season)?  Whether here or with another team, does his performance merit a raise, or even a status-quo deal?  If the Caps go younger, Schultz could be a casualty as the team moves forward.

In the End… It was a season that Justin Schultz never really seemed to settle into.  The strengths he brings to the roster are duplicated in some areas (and with greater production) by John Carlson.  He can be a productive secondary scorer and second team power play performer, but things never seemed to break his way to be that player consistently this season.  And, it just magnified the occasional problems he has defensively.  All in all, a frustrating season.

Posted by The Peerless at 3:10 PM No comments: