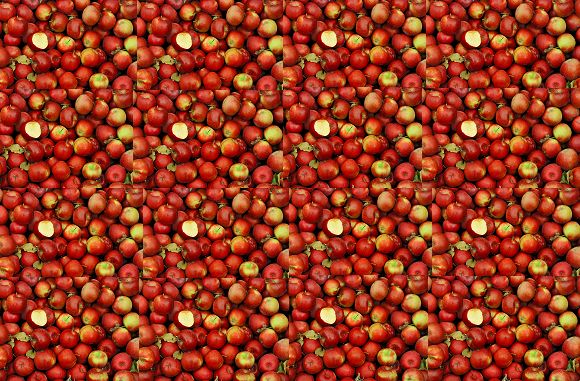 For the second time in a week, the Washington Capitals faced off against the Ottawa Senators.  The only differences, it seemed were the venue and color of jerseys.  The actual playing of the game in Ottawa resembled the 2-1 Caps win in Washington as the Caps survived another grinding game against the Sens, coming out on top, 1-0.

The Caps got off and running early.  It was the product of an historic play.  Dmitry Orlov started the play by peeking around from behind his own net and sending the puck up to Nate Schmidt at the blue line.  Schmidt took a couple of strides, then from the red line fed Nicklas Backstrom skating down the middle.  After gaining the Ottawa blue line, he slid a backhand pass to T.J. Oshie at the top of the left wing circle, and Oshie fired a one-timer that beat goalie Mike Condon over his left shoulder on the far side just 1:38 into the game.  For Backstrom, it was his 500th career assist, the first player in team history to hit that mark.

And for the scoring, that was it.  For the next 58 minutes and change, it was the Braden Holtby show.  He turned away all 30 shots he faced to seal the 1-0 win.

-- Reaching the 500-assist mark is not the only noteworthy aspect of Nicklas Backstrom’ milestone in this game.  Backstrom reached that mark in his 691st game with the club.  As Craig Laughlin noted in the Caps telecast, only Peter Forsberg among players born in Sweden reached the 500-assist mark in fewer games than Nicklas Backstrom.  Forsberg did it is 551 games.  And, as Laughlin pointed out, only two active players – Jaromir Jagr and Sidney Crosby – got to 500 sooner than Backstrom.  Jagr did it in 642 games, while Crosby did it in 554 games.  It's a lot of apples.

-- T.J. Oshie took a Dion Phaneuf hit square on his shoulder in the first minute of the second period and was forced to get treatment in the locker room (clean hit by Phaneuf).  He missed four minutes before returning to the lineup.  It is, however, the same shoulder he injured against Detroit earlier in the year, causing him to miss seven games, and he did head back down the tunnel to the locker room late in the second period after being abused by Phaneuf one more time.

-- Braden Holtby pitched his second straight shutout, tying him with Minnesota’s Devan Dubnyk for the league lead (five).  In his last 11 appearances, he is 6-2-2 (one no-decision), 1.44, .947, with four shutouts.  Looks like he’s back in the Vezina conversation.

-- Tom Wilson had one of those inspirational plays that lifts a team.  On a late Ottawa power play, Wilson sacrificed his body to get in the way of an Erik Karlsson bomb, a block that stung him and had him hobbling to the bench.

-- Washington’s power play continues to struggle.  Not that they had many opportunities.  They were 0-for-2 and had one shot in 4:00 of power play time, a 42-footer from Alex Ovechkin.

-- Speaking of “almost a third,” John Carlson had six blocked shots, almost a third of the 21 that the Caps had for the game.

-- In one of the odd, infrequent results of this game, Evgeny Kuznetsov won eight of 11 faceoffs.  This is not the strongest part of Kuznetsov’s game.

We had the feeling early on this season that the Caps were suffered a form of post-traumatic stress syndrome after their overtime exit in the playoffs last season.  They seemed sluggish, disengaged, and unfocused for long stretches of their first 23 games.  But since they beat Buffalo in overtime on December 5th, the Caps are 12-2-2 and seem to find different ways to win each night, whether it’s lighting up the hottest team and the hottest goalie in the league for five goals, as they did against Columbus on Thursday in a 5-0 win, or playing smothering defense with sharp goaltending in a tight, low-scoring game, as they did tonight.  It’s an example that it’s not how, it’s how many…wins, that is.  Let’s just hope T.J. Oshie is not out for any extended length of time but takes all the time he needs to get well.

Posted by The Peerless at 10:21 PM No comments:

The Peerless Prognosticator is ON THE AIR!!! -- Game 39: Capitals at Senators, January 7th

The Washington Capitals, fresh off their 5-0 dismantling of the Columbus Blue Jackets to end the second-longest in-season winning streak in NHL history, look to extend a winning streak of their own when they visit the Ottawa Senators on Saturday night.  Washington will head in the game carrying with them a four-game winning streak, the second longest in the league, with the Pittsburgh Penguins, now that Columbus’ run has ended (the Vancouver Canucks have a five-game streak going into Friday night’s game against the Calgary Flames).

Meanwhile, the Senators have not played since dropping a 2-1 decision to the Caps in Washington on New Year’s Day.  It makes a lot of what we wrote for that game still relevant from their end.
So let’s take a look at the Caps.  Starting with a 6-2 win in New Jersey over the Devils on New Year’s Eve, the Caps have four consecutive wins heading into this game.  The Caps have outscored opponents by a 19-8 margin, those 19 goals scored by 14 different players.  Those 19 goals generated points from 19 different players.

Justin Williams leads the group of goal scorers with three and is tied for the team lead over the last four games with seven points.  It is part of a longer run of success for Williams who started the season sluggishly.  After he managed only a 2-2-4, minus-4, scoring line over his first 23 games, Williams is 9-7-16, plus-7, in his last 15 games.  One might call it the hockey gods paying a debt of sorts.  Williams scored those two goals in his first 23 games on a total of 52 shots (2.26 shots per game/3.8 shooting percentage).  Over those last 15 games in which he has nine goals, Williams did it on 30 shots (2.00 shots per game/30.0 shooting percentage).  Here is an odd fact about Williams in his career.  He has received votes for a league award only once.  Not the Hart, not the Selke, not the Bing, not the Lindsay.  Just one – the Conn Smythe.  He won it.  Caps fans hope he makes it two later this year.  In 36 career games against the Senators, Williams is 7-12-19, minus-5.

Evgeny Kuznetsov is tied with Williams for the team lead in total scoring over the four-game winning streak (1-6-7, plus-6).  He, too, is in the midst of a longer scoring run, going 1-15-16, plus-5, in his last 15 games after struggling to open the season with a 3-6-9, plus-5, scoring line in his first 23 games.  He’s been streakier than Williams over this recent run with a six-game points streak followed by a three-game drought, then a stretch of points in four of his last six games heading to Ottawa.  Kuznetsov is 1-2-3, even, in seven career games against Ottawa. 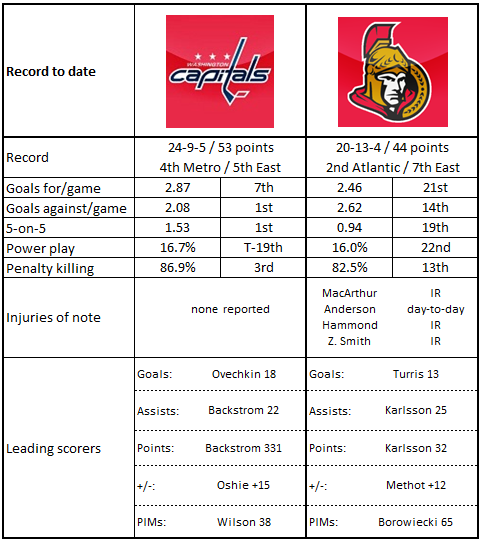 1.  Ottawa has had 28 skaters dress for the club this season, but only 17 of them have recorded points. Eleven players appearing in a combined 61 man-games did not record a point.  As you might expect, none of them are “plus” players, posting a combined minus-18.

2.  Since 1998-1999, when Ottawa recorded its first 40-win season in franchise history, only the New Jersey Devils among Eastern Conference teams have more wins (736) than the Senators (726).  We don’t count Detroit, which spent most of those seasons as a Western Conference team.

3.  Ottawa just doesn’t do well in first periods. Only nine times in 37 games have they taken a lead into the first intermission (6-2-1).  Only Philadelphis (eight times) and Colorado (five times) have done it with less frequency.

4.  Ditto for the scoring first thing. Ottawa does well when they do score first, holding the sixth-best winning percentage in the league.  But they have done it only 15 times in 37 games.  Only three teams – Tampa Bay (14), Vancouver (14), and Colorado (11) have done it less often.

2.  In one of the weird sidebars of the four-game winning streak, the Caps’ special teams index (power play plus penalty killing percentages) is 100.0. Not that they have been equally efficient on both ends of special teams.  The penalty kill has been fantastic (22-for-24/91.7 percent).  The power play…not so much (1-for-12/8.3 percent).

3.  Bet you noticed something else about those special teams numbers in the winning streak. Opponents have been on power plays twice as often (24 times) as the Caps (12 times).  Think that is compatible with winning in the long term?  No, we don’t, either.

5.  Adjusted for score, zone, and venue, the Caps are road warriors when it comes to possession. They rank first in the league by that measure in road games (54.91 percent; numbers from Corsica.hockey).

At even strength, keep an eye on Kyle Turris.  In 37 games he has 12 even strength goals to lead the club, almost as many as the next two Senators – Derick Brassard (7) and whichever of five players you care to pick who have six.  He has been something of a Caps-killer generally when it comes to goal scoring.  His goals-per-game mark against Washington (0.50) is the highest of any team against which he has played in his career.  Naturally, he scored a goal (Ottawa’s only goal) in the game on New Year’s Day.  He has slowly and steadily cobbled together a consistent season, point-wise.  Only once since November 13th, spanning 23 games, has Turris gone consecutive games without a point (Games 35 and 26 on December 27 and 29 against the New York Rangers and Detroit Red Wings, both Senator losses, the latter in overtime).  Overall, Turris is 7-3-10, plus-10, in 14 career games against Washington.

Did you know that there are only ten defensemen in the league with at least 15 points and at least a plus-10?  That list includes Montreal’s Shea Weber.  It includes San Jose’s Brent Burns.  It includes Minnesota’s Ryan Suter.  It also includes Dmitry Orlov (2-16-18, plus-13).  Orlov is starting to come on in the offensive end of the rink.  He started the 2016-2017 campaign going 0-2-2 in his first dozen games.  Since then, though, he is 2-14-16 in his last 26 games.  He’s not Erik Karlsson among offensive defensemen, but he’s not chopped liver, either.  And, of that group of ten defensemen with at least 15 points and plus-10, he is, at 25 years of age, the second youngest (Minnesota’s Matt Dumba is 22).  He also has points in his last six road contests (0-7-7, plus-6).  In nine career games against the Senators, Orlov is 1-2-3, plus-5.

The obvious concern in this game is, for the Caps, a letdown after the big win on Thursday night.  On the other hand, Ottawa has had five off-days for rust to accumulate, and they are bringing a three-game losing streak in, to boot (0-2-1).  This has the makings of a sloppy game, one that might resemble last Sunday’s game and not in a flattering way for either team.  Still, when the final horn blows, the Caps could find themselves leap-frogging both Pittsburgh and the Rangers into second place in the Metropolitan Division with a win, depending on what the Rangers do in Columbus on Saturday night (Pittsburgh is in the midst of an eight-day break and do not play again until Sunday).  That should provide some incentive, right?

Posted by The Peerless at 6:35 AM No comments: