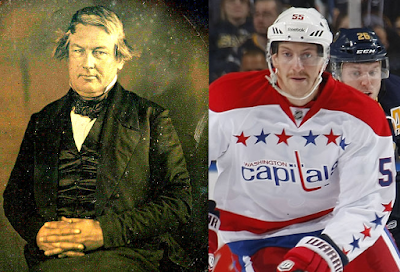 In the pantheon of American Presidents, Millard Fillmore occupies the figurative equivalent of a broom closet.  Consider what the first paragraph of his entry at whitehouse.gov says…

“In his rise from a log cabin to wealth and the White House, Millard Fillmore demonstrated that through methodical industry and some competence an uninspiring man could make the American dream come true.”

Talk about damning with faint praise.  How many Presidents will you find the adjective “uninspiring” applied to them?  Or merely possessing “some competence?”  And so it is with the 13th President in American history, a man generally regarded among the worst of those who trod the halls of the White House.  It brings to mind a Washington Capital who was drafted by the club after a rather impressive improvement in his second year of Canadian juniors, but who left the club unappreciated and unloved in many quarters of Capitals Nation.  That would be defenseman Jeff Schultz.

Born in upstate New York to a family of nine children (he was second oldest and the oldest son), Fillmore might have followed a career as a cloth-maker.  When he was 14 he began his apprenticeship in that field and was diligently pursuing his training in that field when he began to study law.  Finding that pursuit more to his liking, he completed his training and was admitted to the New York bar at the age of 23.

That was the first step in a steady climb up the political ladder.  First elected as a New York state assemblyman in 1828, he advanced to the United States House of Representatives four years later.  He served four non-consecutive terms in that body before trying his hand at running for Governor of New York.  He failed, but then went on to help found the University of Buffalo (today a school in the State University of New York system of colleges).  It set the stage for his return to politics, winning election as the first elected Comptroller of the state of New York.  It was not the most exciting of positions, one that includes auditing government operations, reporting on state finances, and similar areas of concern.

Even in what was quite frankly a dull posting in state office, Fillmore had a certain attractiveness as a national candidate in the election of 1848.  By this time, slavery was a fault line of politics with sides chosen up of “pro” and “anti” points of view.  With Zachary Taylor, a Virginia slaveholder, heading the Whig ticket for President, the party looked for balance and found it in Fillmore as candidate for Vice President.  Taylor won a relatively close three-way race and began a term that would be consumed by the slavery debate.  As part of his constitutional duties, Fillmore presided over constant Senate debate on the subject, a task that would prepare him for the unexpected death of Taylor in his second year in office and Fillmore’s elevation to the presidency in July 1850.

The slavery question dominated Fillmore’s agenda.  In an abrupt departure from his predecessor’s preferences, Fillmore advocated for a compromise package pushed in Congress, what would be known as the “Compromise of 1850.”  The five bills making up the Compromise were signed into law by Fillmore in September of that year.  It came at a price, though.  Northerners of his own party were in vehement disagreement with elements of the Compromise, especially the Fugitive Slave Act, and that opposition was enough to deny Fillmore the nomination of the Whig Party for President in 1852.  The cleavage in the party damaged the Whigs in the general election, and their candidate – Winfield Scott – won only four of 31 states and only 42 of 296 electoral votes.

Fillmore ran again in 1856, this time as a member of the Whig-American Party, but the Whigs had long since dissolved into what would become the Republican Party and a small remnant under whose banner Fillmore ran.  He finished a distant third in voting, managing less than three percent of the national vote and just eight of 296 electoral votes (Maryland was the only state he won).

That slow steady climb up the ladder, followed by a fall perhaps more a product of circumstance than his own shortcomings is something that might apply to Jeff Schultz as well.  As a 16-year old first year defenseman with the Calgary Hitmen in the Western Hockey League, Schultz played in 50 games with numbers that would not impress anyone – two goals, three points, a minus-6.  He had as many points as teammate Andy Rogers in twice as many games (hold Rogers’ name in your mind; we’ll get back to him in a moment).

However, the following season Schultz appeared in 72 games, went 11-24-35, plus-28, leading the team’s defensemen in goals, assists, and total points, while his plus-28 was third best among all Hitmen skaters.  It was a line on his resume that got the attention of the Capitals, who made Schultz the 27th overall pick of the 2004 entry draft (three spots ahead of Rogers, who never would play in the NHL and has been out of hockey for six years) and the sixth defenseman taken in that draft.

That began Schultz’ slow, steady climb up the Caps’ organizational ladder.  After two more years in Calgary with the Hitmen, Schultz joined the pro ranks in 2006-2007, splitting time between the Hershey Bears of the AHL (44 games) and the Caps (38 games).  Those 38 games with the Caps were not particularly noteworthy, but for one thing.  Schultz recorded only three assists in those 38 games, but he tied Milan Jurcina for the best plus-minus among Caps defensemen that season (plus-5).  The following season he set a personal best in goals (five) and shooting percentage (13.9 percent), marks which still stand.  Two seasons later, as part of the juggernaut that won the Presidents Trophy and established the 2009-2010 team as the most successful in the regular season in club history (121 points), Schultz finished with a career high in points (23) and was a plus-50, the first time a defenseman finished plus-50 or better since Chris Pronger did it for the St. Louis Blues in 1999-2000 (plus-52).  It is worth noting that Pronger won both the Norris (top defenseman) and Hart (most valuable player) trophies that season.  For Schultz, it meant a four-year contract extension with an average annual value of $2.75 million.

Still, there always seemed to be something in Schultz’ play at odds with fan perceptions of what he should be like as a player.  Roughly the same size as Pronger (6’6”/230 pounds), Schultz was not nearly as fierce or as physical a player as Pronger.  He played like a defenseman half a foot shorter and 30 pounds lighter, more angles and position than force.

The next season Schultz, caught between what worked for him and a sizable portion of the fan base who thought him insufficiently tough, experienced a severe drop in production – one goal, ten points, and a plus-6.  He was sixth among defensemen in average ice time.  It didn’t help that he sustained a broken thumb that cost him nine games at mid-season.  It was the beginning of a quick slide for Schultz, one that would be much shorter than his climb up the ladder.  In 2011-2012 he appeared in just 54 games for the Caps, posting six points, the fewest he had since his 38-game rookie season, and he was a minus-2, the first time in his NHL career he found himself on the “minus” side of the plus-minus ledger.  After the 2012-2013 season, one in which Schultz appeared in just 26 games (0-3-3, minus-6), he was placed on waivers by the Caps and subsequently bought out of the last year of his contract.

For both Fillmore and Schultz, things seemed to work out after leaving Washington.  Fillmore went on to retire to Buffalo where he married a wealthy widow and helped found the Buffalo Historical Society.  He also served as commander of a home guard regiment in upstate New York.  By the time of his death in 1874 he was widely regarded as Buffalo’s leading citizen.

After being bought out by the Caps, Schultz was picked up by the Los Angeles Kings, and after spending a full season in the AHL with the Manchester Monarchs, he had spot duty with the Kings in 2014-2015.  He even appeared in seven postseason games for the Kings that season as Los Angeles went on to win the Stanley Cup, his name now engraved on that trophy, a permanent fixture in its history.

Millard Fillmore and Jeff Schultz are men of modest beginnings who climbed the ladder to considerable heights in their respective professions.  Both experienced an unfortunate fall from those heights, as much a matter of circumstance as anything else – the issues pressing on Fillmore’s administration, perceptions of what sort of player Schultz should be.  They recovered a measure of harmony in new surroundings, although neither could be said to have a renowned reputation in Washington long after their departures.  In that sense it is reasonable to look at Millard Fillmore and Jeff Schultz and see things in common between them.
Posted by The Peerless at 5:00 PM No comments: