“Hope is patience with the lamp lit.”
-- Tertullian

“Hope” is the word that will be on Washington Capitals fans’ minds regarding Nicklas Backstrom over the next several months.  They hope he will regain full health and fitness after undergoing hip surgery.  They hope he will be able to return to the ice at some point this season.  They hope that he can perform at a level that approaches, if not meets, his performance level of the last several years (at 35 years of age come November, he would not be expected to be the player he was a decade ago). They hope he will be healthy to have a full and healthy life after he hangs up his skates, whether that is this year or after his current contract expires in 2025.

Backstrom’s game has always been characterized by three attributes – its understated nature, its consistency, and its prolific level of production.  Even in recent years, when it seemed a few Caps fans were souring on his performance, he was consistent and still averaging almost a point per game.  These are qualities that will be hard to replace in the short term, and the second line center position might be a revolving door while Backstrom’s rehabilitation proceeds.  And don’t underestimate the chemistry he had with linemates; his ability to complement players and put them in the best positions to produce on the ice will be something difficult to replace, especially early in the season.

Let’s say, for the sake of argument, Nicklas Backstrom’s surgery was 100 percent successful and that his rehabilitation proceeds without incident or setback.  While he might display some level of rust upon his return, it would also not be unreasonable to think he would be productive.  While it might be fashionable in some quarters to think his game is in decline, it is not necessarily a rapid decline.  In the three seasons preceding last year’s injury-influenced season, he managed to appear in 94.7 percent of the Caps’ games and posted a per-82 game scoring line of 21-55-76, even.  He averaged six goals and 27 assists on power plays per82 games, and he shot 12.5 percent, better than the 12.1 percent over his career prior to that three-year window.

The Big Question… Is Nicklas Backstrom’s career at an end?

It is too early to entertain that notion seriously, but it does lurk in the background.  On the plus side, Backstrom has never been the sort of player who depends on speed, being more of the cerebral sort to think the game better than opponents and has uncommonly skilled hands.  On the other hand, the injury did seem to more than offset those attributes last season, and his defensive game was a liability for the Caps as the season wore on. One might anticipate that when (if?) he does come back at some point this season, his minutes will be closely managed and monitored.

For this season, at least, Backstrom might be more of a power play specialist than he has been over his career to date, his even strength numbers minimized as he finds a comfort level after the long absence.  The Caps seemed to make personnel decisions in the off-season with the possibility of his missing the entire season in mind, although he did remark recently that “[the hip] feels good for the first time in years,” and he is working with his personal trainer to keep his rehabilitation on schedule.  It makes for a bit of optimism, but the over-under on his return might be when winter ends and spring begins.  That would give him about ten regular season games at season’s end to evaluate where he stands.

The dilemma that might be facing the Caps would be if the team is battling on the edge of playoff eligibility late in the season. Do they bring a rusty Nicklas Backstrom back for, say, the last ten or so regular season games in an effort to play him into hockey shape in time for a postseason for which they might not qualify if his skills have eroded too far over his absence?  Keeping track of Nicklas Backstrom’s progress in returning to the ice might be a pastime of more than a few Caps fans this season.  They’ll be keeping hope alive.

Posted by The Peerless at 7:58 PM No comments: 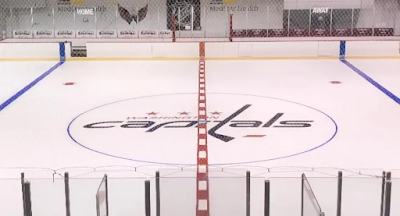 In the first six parts of this look back and look ahead for the Washington Capitals rookie class of 2021-2022, we covered each of the 11 rookie skaters who appeared for the Caps.  In this last part, we think about this class as a class going forward.  While they were impactful in terms of games played and, in some cases, production, will their sophomore seasons reflect improvement, or will they have less exposure in the NHL?

Let us start with man-games played.  Last year’s rookie class combined for 273 man-games played.  This could be considered less a matter of value than one born of necessity.  No Capital appeared in as many as 80 games last season, and in fact a rookie – Martin Fehervary – tied for most games played for the Caps (79, with Evgeny Kuznetsov).  Nine veterans who could be considered “regulars” missed at least ten games for various reasons, mostly injuries –Trevor van Riemsdyk (ten), Lars Eller (10), Conor Sheary (11), Nic Dowd (18), Carl Hagelin (29), Nicklas Backstrom (35), T.J. Oshie (38), Anthony Mantha (45), and Michal Kempny (67).

That is 263 man games that had to be made up from somewhere.  Fehervary had earned a spot as a regular, as did Connor McMichael (to a point; see Part 6 for a discussion of his season and outlook). Nevertheless, rookies were called up in significant numbers and to play a significant role to an unexpected extent for a team with a “win now” point of view.

Then there is the matter of head coach Peter Laviolette and his propensity, or lack of it, to employ rookies.  He does not appear to be especially enamored of giving rookies a lot of ice time.  But his career is characterized more by unevenness than an aversion to employing rookies.  The 11 rookies he employed with the Caps in 2021-2022 were the second-most he ever used in a season over a 20-season head coaching career.  He used 12 rookies with Philadelphia in 2011-2012, and there are two similarities between that season with the Flyers and the season just completed with the Caps.

First, both teams were hit hard by injuries, necessitating a more relaxed posture regarding the use of rookies.  Ten of the 12 rookies used by the Flyers that season played in at least ten games, five of them appeared in more than half of the Flyers’ games.  Why?  Daniel Briere missed ten games.  Andrej Meszaros missed 19 games.  James van Riemsdyk missed 39 games.  Chris Pronger, in what would be his last NHL season, appeared in just 13 games.  Vets missed a lot of games for the Flyers that season.

Second, and this is reflects Laviolette’s skill in managing a team in adversity, both the Flyers of 2011-2012 and Capitals of 2021-2022 had quite successful regular seasons, all things considered.  The Flyers went 47-26-9 (103 points/third in the Atlantic Division) under Laviolette, while the Caps were 44-26-12 (100 points/fourth in the Metropolitan Division) last season.

What this leads up to is whether the conditions will repeat themselves so that last year’s rookie class gets another bite at the apple of regular NHL play.  From a Caps fan’s perspective, the reflexive answer is “let’s hope not.”  But injuries happen, and this club cannot be thought of as immune to that problem given its aging veteran component.  It already has to contend with Nicklas Backstrom, Tom Wilson, and perhaps Carl Hagelin missing huge chunks of the upcoming season as they make their ways back from injuries and/or subsequent surgeries.  Caps management has tried to mitigate the effects of this potential situation with the acquisitions it made after last season.  This would normally have the effect of closing off pathways to openings for rookies who might otherwise be expected to take the next step on their developmental path.

There was also an odd character, albeit pleasant, about this rookie class.  Of the 11 members of the cast, ten were draft picks (Joe Snively was signed as a free agent).  The odd part is the mix by selection – four first round picks (Hendrix Lapierre/2020, Connor McMichael/2019, Alex Alexeyev/2018, Lucas Johansen/2016), two second round picks (Brett Leason/2019, Martin Fehervary/2018), two third round picks (Aliaksei Protas/2019, Garrett Pilon/2016), and two fifth round picks (Beck Malenstyn/2016, Axel Jonsson-Fjallby/2016).  Malenstyn and Jonsson-Fjallby are the first pair of players taken in the fifth round of the same draft (2016) in team history to dress for the Caps.  Only one other pair of players taken in a later round of the same draft suited up for the Caps.  Brad Schlegel and Keith Jones, both taken in the seventh round of the 1988 draft, dressed for the Caps.

It was a special concurrence of events taking place in 2021-2022 that resulted in the Caps employing 11 rookie skaters among 35 to skate for the team for a total of 273 man-games.  Frankly, it was not part of the plan, but rather an occurrence born of necessity.  It might be argued that this rookie class played a significant role in keeping the Caps competitive early in the season.  Over the first 22 games, a period over which the Caps went 14-3-5, eight rookies dressed, contributing nine goals and 22 points in 86 man-games.  Six of the eight had goals; seven of them had points.  Only Connor McMichael had a minus rating in this group (minus-2), but on the other hand he did lead the group over that period with seven points.

One would not expect that 2021-2022 experience will be repeated.  In fact, it would seem more likely that under the best of conditions, few of that 2021-2022 rookie group would dress for the Caps, or if any do, it would be for a mere handful of games.  Fehervary was and will be a regular in the lineup.  After that, the jury might out on Connor McMichael and Axel Jonsson-Fjallby.  As for the other eight skaters, one could never discount entirely a player playing himself onto the roster in training camp, but even with the injuries that the Caps will be dealing with to start the season, there just seems to be no room for those members of the class to break through and even less likely that members of the 2022-2023 rookie class will make an impression.  It makes the 2021-2022 rookie class for the Washington Capitals a truly special one, unique among the rookie classes in team history.

Posted by The Peerless at 12:07 AM No comments: