After a week hiatus due to postponements of games with the Philadelphia Flyers and Buffalo Sabres, a product of COVID protocols, the Washington Capitals are scheduled to return to the ice on Sunday afternoon against the Pittsburgh Penguins in the first of a two-game set at PPG Paints Arena in Pittsburgh.  The teams will meet for the second game of the set on Tuesday evening at the City of Bridges.

The Penguins come into this game a team that is grinding through it schedule the way a new car driver in the old days might have been grinding his gears because he did not know how to use a clutch.  Since posting their only win in regulation this season, a 3-2 win over the New York Rangers on January 24th, the Penguins are 2-3-1, both of their extra time wins earned in third period come-from-behind-to-tie fashion before they took the extra standings point in extra time, a 5-4 win in overtime over the Rangers and a 4-3 win over the New York Islanders in a Gimmick last Thursday.

Even though the Penguins have considerable offensive talent at forward, how Sidney Crosby goes is still largely how the Penguins go.  And over this 2-3-1 stretch, Crosby has not been particularly Crosby-esque.  Over those six games he is 1-2-3, minus-3, and is without a power play point (as is the rest of the team).  He does, however, have a game-deciding Gimmick goal that was the difference in the 4-3 win over the Islanders on Thursday.

But for three games against the New Jersey Devils that were postponed due to COVID issues with the Devils, Crosby would likely be celebrating against the Caps his 1,000th NHL game played.  As it is, he stands at 996 games as an NHLer.  And while the season is yet young, even a player as gifted as Crosby cannot push back time forever.  Through 12 games, his 0.33 goals per game is the lowest of his career, as is his 0.50 assists per game. He stand at “only” 0.83 points per game, and while this would be an enviable rate of production for the majority of NHL players, Crsoby has never averaged less than a point a game for a season in his career.  It would surprise no one if Crosby went on a scoring spree that netted him 15 points in his next half-dozen games.  Then again, perhaps we are seeing a hint that “The Kid” is no longer the kid, a hint of what lies in store for Crosby as it does for every NHLer at some point.  If you think this is incredible, consider that the word “trade” has been attached to Crosby’s name, a matter unthinkable until now.   Crosby is 27-50-77, minus-3, in 54 career games against the Caps.

There are two things the Penguins have not had from their defense this season: scoring and continuity.  As to the latter, only one Penguin defenseman among the 11 to dress for the club has appeared in all 12 games.  As to the latter, only three Penguin defenseman have recorded a goal, each with one apiece, and only three have more than one point.  John Marino is the only defenseman to dress for all 12 games played by the Pens to date, but he is not one of the three players to have recorded more than one point.  His lone assist, not to mention his defenseman-worst minus-4 rating, is attention grabbing.

It is either an unexpected development for a promising youngster, or it is an example of the dreaded “sophomore slump.”  Last year, in his rookie season, Marino went 6-20-26, plus-17, in 56 games, a season good enough for him to finish eighth in Calder Trophy voting for top rookie.  This season, he is 0-1-1, minus-4, in 12 games and has yet to record a point on home ice.  In addition, it is difficult to score goals when pucks do not reach the net, so his having no goals on only one shot on goal in four home games is hardly a surprise.  Perhaps his goal scoring will come, though.  Overall, he had only four shots on goal in his first eight games (averaging 22:37 in ice time), but he has eight shots on goal in his last four games (averaging 25:10 in ice time).  Marino (who was listed as day-to-day with an injury) is 0-1-1, minus-2, in four career games against Washington.

It is difficult for rookies to break into a lineup as veteran-laden as the Penguins, but defenseman Pierre-Olivier Joseph has made an impression in the early going.  His path to the Penguins was a bit roundabout.  Drafted 23rd overall (eighth defenseman overall) in the 2017 Entry Draft by the Arizona Coyotes, he never played at any level in the Arizona organization, spending two years in the QMJHL in Canadian juniors before he was traded to Pittsburgh with Alex Galchenyuk for Phil Kessel, Dane Birks, and a fourth-round pick in the 2021 Entry Draft.  Galchenyuk lasted 45 games with the Pens before he was traded to Minnesota as part of a deal that brought Jason Zucker to Pittsburgh; he later signed as a free agent by Ottawa.  Joseph spent last season with Wilkes-Barre/Scranton in the AHL and was designated for taxi-squad assignment to start this season.  Injuries pressed Joseph into action, and he responded with a goal and four assists, his five points tied for the team lead among defensemen (with Kris Letang), and his plus-5 rating is tied among all skaters for the Pens (with Kasperi Kapanen).  This will be his first appearance against the Caps, and he will try to avoid moments like this against Mathew Barzal of the New York Islanders: 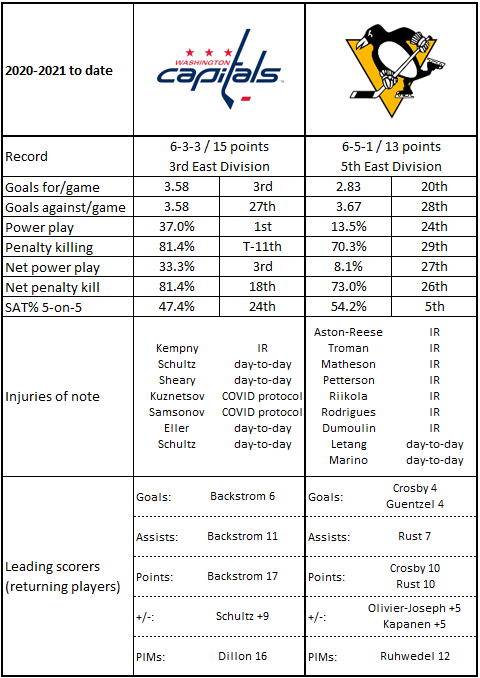 2.  Few, if any teams, have as much a home-road disparity on their power play as the Penguins.  Pittsburgh is a league-worst 7.1 percent on the road with a man advantage (2-for-28), but they rank tenth at home on the power play at 33.3 percent (3-for-9).  Two of those three goals came at the expense of the Caps, when they went 2-for-3 in a 5-4 overtime win over Washington on January 19th in Pittsburgh.

5.  Sidney Crosby’s game-deciding freestyle goal on Thursday was the 99th Gimmick goal of his career and 18th game-deciding goal, putting him in a tie for fifth place all-time in the freestyle competition with Joe Pavelski and Mikko Koivu.

4.  Washington is finding itself too often penalized in road games.  Their net penalties taken per 60 minutes of minus-1.18 is fifth-worst in the league; only New Jersey is worse in the East Division (minus-1.71).

When these teams last met, in Games 3 and 4 of the season for the Caps back in January, goaltender Casey DeSmith took both games of the two-game set and allowed three goals in the first game and four in the second.  That was the low point of his season to date, but then again, his season as the nominal Penguin backup has consisted of six games.  He has not been impressive.  Among 46 goalies with at least 250 minutes played through Friday night’s games, DeSmith ranks 39th in save percentage (.885).  And he’s the better of the two Pittsburgh netminders in that statistical category.

Tristan Jarry has appeared in seven games, been pulled once after allowing three goals on six shots in 11:30 in an Opening Night 6-3 loss to Philadelphia, has allowed three of more goals in six of his seven appearances, and his save percentage of .857 ranks 45 in that group of 46 goalies with at least 250 minutes played.

Neither netminder comes into this series on a high note.  Jarry’s last outing was a 22-save effort (four goals allowed) in a 4-3 loss to the New York Islanders on February 6th.  DeSmith allowed three goals on 29 shots in his last outing, a 4-3 Gimmick win last Thursday.  Jarry has never faced the Caps, while DeSmith is 2-1-0, 2.92, .873 in three career games against Washington.

There are the intimidators, and there are the intimidated.  Tom Wilson does not display his intimidation skills outside the rules as often at this stage of his career as he did earlier in his tenure with the Caps, saving that sort of thing for being a fearsome hitter inside the rules.  As for “intimidated,” Wilson has hardly been such in road games this season.  Wilson leads the team in goals scored on the road (three in five games), is tied with Nicklas Backstrom in road points (five), leads the club in even strength points on the road (five), leads the team in shooting percentage (42.9), leads the team in hits (26), is second in hits per 60 minutes (16.56), leads all forwards playing more than one game in takeaways per 60 minutes (1.27), and he is the only forward to average at least 1:30 per game on both power plays and penalty kills (1:31 on power play, 2:15 on penalty kills).

Wilson had a six-game points streak interrupted by consecutive games without a point, but he broke out in a big way against the Flyers in his last contest, recording the second four-point game of his career (1-3-4) in the Caps’ 7-4 loss to Philadelphia last Sunday.  Wilson is 5-3-8, minus-6, in 27 career games against Pittsburgh.

These two teams, arguably the class of the Eastern Conference over the last decade and contenders to add to their individual and team hardware collections this season, are two struggling teams.  Since the Pens’ only regulation win of the season last month, their 2-3-1 record is tied for 24th in standings points (five).  The Caps are barely better over the same span, their 3-3-0 record ranking 23rd (six points).

The Caps’ shake up of their hockey operations personnel after last season was, for the most part, restricted to the area behind the bench, with the additions of Peter Laviolette as head coach and Kevin McCarthy as assistant coach.  Michael Peca was added just this past week as a player development coach with the club.

In Pittsburgh, the shake-up came in the front office in-season and in unexpected fashion when Jim Rutherford, who had been the Penguins’ general manager since June 2014, leading them to two Stanley Cups, resigned abruptly on January 27th.  The Pens moved swiftly to fill the vacancy, and then some.  After Patrik Allvin served briefly in an interim GM capacity, the Pens hired Ron Hextall as Rutherford’s permanent replacement, and then for good measure brought on long-time NHL executive Brian Burke as President of Hockey Operations.

The jury will not render a verdict for either of these teams on any of these moves until the spring, when we find out if one or both – or neither – of these teams reach the postseason.  For now, even for a pair of struggling teams, it is the next chapter in a long-running rivalry that has had more than its share of excitement and, at times, disappointment.  But if the Caps can take advantage of a weak (and nicked up) Penguin squad on both sides of special teams, not to mention iffy goaltending, these games could end in the win column for the good guys.  Enjoy it, if the game is played, for one does not know when COVID will come knocking again to play havoc with the schedule.