The Peerless Prognosticator is ON THE AIR!!! -- Caps vs. Lightning, January 31st

The Caps go forth this afternoon to try to grab a piece of franchise history as they host the Tampa Bay Lightning at Verizon Center, where…

“They usually call death row the Last Mile, but we call Verizon Center the Red Mile, because the stands are the color of the face of a raving lunatic.”

“…and taking the ice against the Caps these days is like hockey’s form of an execution.”

Interesting way to look at it. You look familiar…

And you would know about such things?

“When you’ve spent a lifetime close to a chair called ‘Old Sparky’ watching men ride the lightning, you learn about such things.”

“Figured all that out, huh? You’re almost as smart as Mr. Jingles.”

And so the Tampa Bay Lightning, the last team to defeat the Washington Capitals, walk the Red Mile this afternoon in an attempt to derail the rampaging beasts of the east, who will be out to set a franchise record for wins in a month. It won’t be easy, especially since the Lightning are likely to have the Caps’ full and undivided attention. Since the Lightning defeated the Caps in Tampa by a 7-4 score on January 12th, they are 4-3-1 in eight games. But while the Lightning do bring a winning record into this game in their last eight games, the competition against which they achieved that record was not quite top-notch. The schedule included a pair of games against Florida, Carolina, the Rangers, Toronto, Anaheim – not a top-eight team among them. Only Montreal and Atlanta were top-eight opponents in this recent run of games for the Lightning, and neither of those teams are exactly lighting things up these days. Oddly enough, perhaps, it was against the Canadiens that the Lightning had their most impressive recent win, a 3-0 shutout last Wednesday. In a way, the eight-game run is merely an extension of the season they’ve put together so far, reflected in these overall numbers: 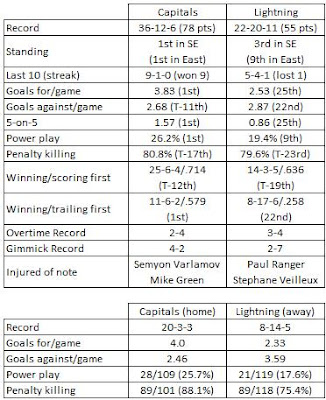 In the eight games since the Lightning defeated the Caps, they have been outscored by their opponents by 22-17. Seven of the 17 goals the Lightning scored were on the power play (7-for-28/25.0 percent). But what the Lighting took, they gave away on special teams, allowing seven goals in 30 shorthanded situations (76.7 percent penalty killing).

Of the 17 goals scored by the Lightning in their last eight games, nine of them have been split evenly among Vincent Lecavalier, Steven Stamkos, and Martin St. Louis. These would be the three players for Tampa Bay who also have topped the 50-point mark this year. For Lecavalier, it is a solid run in what has become a solid, if unspectacular – for him – season (14-38-52 in 53 games). The Lightning center had a three-game streak without a point that ended with the first game of December, but since then has not had consecutive games without a point and has points in 19 of 27 games (9-22-31). He is 1-1-2 in two games against Washington this season.

If Lecavalier is having a solid year, then for Stamkos this season would appear to be his putting his stamp on the Lightning as the go-to guy. In only his second season, he has 28 goals, good enough to lead the Lightning and place seventh in the league. He is in the midst of a five-game points streak 3-4-7. He has a pair of goals and an assist in two games against the Caps this year.

St. Louis has been the picture of consistency for the better part of two months. Since enduring a four-game streak without a point that ended on December 4th, St. Louis has had points in 20 of 26 games (10-19-29). He has seven multi-point games in that run. In what might be a nod to Stamkos becoming the go-to guy, though, St. Louis is building his point total on the assist side of the ledger. He is on a pace to set a career high (65) in helpers (59 in 2006-2007). He is 1-2-3 in two games against Washington so far this season.

Which brings us to Steve Downie. The last time we saw the rambunctious forward against the Caps, he was trying to pick a fight with The Franchise, only to have Matt Bradley swoop in and do battle with Downie. A Lady Byng is certainly not in Downie’s future – he is closing in on a professional career high in penalty minutes this season (149, and counting, compared to 195 with four teams in two leagues last year) and has seven fights to his credit. But he is not devoid of productive benefits within the rules, either. His 26 points is sixth on the club, and his 11 goals is fifth. He does not have a point against the Caps in two games this year, but he does have 29 penalty minutes.

In the eight games since the Lightning topped the Caps, Tampa Bay has a grand total of one goal from a defenseman, that coming from Andrej Meszaros in a 5-2 loss to Florida on January 16th. This is perhaps worth noting since the Lightning defense has but one goal against the Caps among the seven they have in two games, that coming from Kurtis Foster in the 7-4 win on January 12th – the only goal he has this month. What the Tampa Bay defense might lack in scoring, they might make up for in taking penalties. Eight Lightning defensemen have more than 20 PIMs (only four Caps have more than 20).

In goal, Antero Niittymaki has the last ten decisions for the Lightning (5-4-1), but how he got there is a bit odd. He played only the last 33 minutes in getting credit for the 7-4 win over the Caps on January 12th. He played 40 minutes before getting pulled – allowing five goals on 18 shots – in a 5-2 loss to Florida on January 16th. He was yanked again after 40 minutes after allowing five goals on 20 shots in an 8-2 loss to the Rangers on January 19th. Niittymaki is capable of scaring up a superior effort (he has allowed only two goals in his last three appearances), but he is also capable of just being scary (he has been pulled in three of his last 12 appearances). The alternatives aren’t good, either – Mike Smith has lost all three career decisions to Washington with a 5.19 GAA and .832 save percentage.

Malone is Tampa Bay’s second-leading goal scorer (21), but he has only two goals in his last 15 games. His providing that goal-scoring is essential to Tampa Bay’s success – he has 16 goals in 22 wins in which he participate this season. Last year he has some success against the Caps (2-2-4 in five games), but this year hasn’t registered a point in either game the teams have played. He is 5-9-14 in 22 career games against the Caps.

With Mike Green getting a three-game vacation, courtesy of the fine folks of the National Hockey League, Pothier seems likely to pick up a little more ice time, especially on the power play, where he is second to Green in average ice time per game. With four goals this season, Pothier is on the brink of tying a career high (five). He has more goals (five) and points (16, in 29 games) against Tampa Bay than he has against any other NHL team.

2. Find the happy place...it's the one lighted by a red light. Steve Downie and Zenon Konopka have 334 penalty minutes and 28 fights between them. Konopka has 21 fights this year by himself, including five in his last 11 games. If Tampa is going to try to neutralize the Caps firepower and sense of mission to atone for the 7-4 whuppin’ earlier this month, these two might try to do that by way of creating some mischief. The object of the exercise is to make the Lightning pay on the scoreboard for any such truculence.

In the end, it is hard to see a way through to how Tampa Bay wins this game. But then again, this is hockey, and the puck is a strange and fickle creature. By the book, this game isn’t competitive after the first period, even if the Lightning are somewhat respectable in their allowance of first period goals (44, tied for 16th fewest in the league). We just think that the combination of the way the Caps have played this month, plus what might be expected to be a desire to avenge the loss to the Lightning earlier this month will lead to the Caps restoring order to the Southeast Division universe…