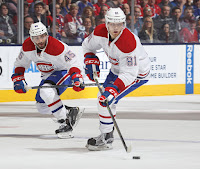 “If you do not change direction, you may end up where you are heading.”
-- Lao Tzu

Lars Eller was the 13th overall pick of the St. Louis Blues in the 2007 NHL Entry Draft, the highest ever Danish born and trained player drafted in the NHL.  However, it was not until he was traded, with forward Ian Schultz, to the Montreal Canadiens for goaltender Jaroslav Halak in June 2010 that he started to develop a profile notable for its offensive consistency.  Eller dressed for 77 games in 2010-2011, his first with the Canadiens, and went 7-10-17, but in the four full seasons after that, he appeared in between 77 and 79 games, scored between 12 and 16 goals, and had between 26 and 30 points.

There are, however, two seasons in his last five worth noting.  The first was the abbreviated 2012-2013 season, one in which Eller played in 46 of 48 games and set career bests in points (30) and plus-minus (plus-8).  It was a year that stood out because it was, by far the best 46-game start in his last five seasons in Montreal.  In none of the other four seasons did he record more than 20 points in his first 46-games of the season.  And it was not as if he was playing with high-powered linemates.  He spent most of his 5-on-5 ice time that season with rookie Alex Galchenyuk and split half of his 5-on-5 ice time with Brandon Prust and Colby Armstrong (numbers from stats.hockeyanalysis.com), neither of whom could be considered a forward of noteworthy offensive skill.

The other season to note with respect to Eller is last season.  It was his worst 46-game start in his last five seasons with Montreal, recording eight goals (the same as in his 2012-2013 season) but only six assists (compared to 22 in 2012-2013).  He also had a career worst 46-game mark of minus-7.  Part of that was playing for a club that fell apart after starting the season 9-0-0 (Montreal was 29-38-6 in their last 73 games), but the Canadiens were not an awful offensive club (they finished 16th in goals per game).  What was odd about those six assists in his first 46 games was who the goal scorers were: Sven Andrighetto (twice), Daniel Carr (twice), Alexander Semin, and Alex Galchenyuk.  It is a reflection of the variety of linemates Eller had. He spent more than 100 of his 970 5-on-5 minutes with eight different forwards.

Perhaps the Canadiens saw Eller’s production as having hit a ceiling, a level they might get with cheaper options (Eller has a $35. Million cap hit through 2017-2018).  Whatever the reasons, the Canadiens traded Eller to the Capitals for a pair of second round draft picks at the NHL Entry Draft in June.

Over his seven-year career, Lars Eller has averaged 14-15-29 per 82 games.  And, he has never missed more than five games in a season in any of the six full NHL seasons in which he played (including the abbreviated 2012-2013 season).  That kind of production and stability out of the third-line center spot would be welcome for a team that couldn’t consistently muster either last year.  He was a good possession player for the Habs last season, posting a 52.7 percent Corsi-for at 5-on-5.  What makes Eller particularly intriguing is thinking about what he might be able to do with stability on his wings.  Consider this description of his 2015-2016 season:

“What you'll see online is two viewpoints. Either he's useless offensively, or he's a possession monster.

The truth is somewhere in the middle. You won't get a 50-point season from the Danish forward, however saying he's useless is incredibly shortsighted. On the flip side of things, yes he does drive possession, however we do have to accept that his offensive upside is limited.

Essentially, Eller provides the Habs with solid minutes, but he'll probably never crack the 20-goal mark in the NHL, especially once we consider his usage.

You can expect him to score 10-15 goals per year, while providing versatility to the head coach. This year Eller was used as a left-wing, a center, and on the right side. He also spent time on 10 different line combinations, none of which lasted more than 135 minutes of ice time.”

The Caps acquired him, in no small part, to avoid having to employ so many line combinations on that third line.

The price tag Eller brings with him is pretty high.  With a cap hit of $3.5 million a year he is in an age and compensation neighborhood that includes, among others, Cam Atkinson, Kyle Turris, David Desharnais, and Reilly Smith, all of whom have at least one 50-point season on their resume (numbers from generalfanager.com).  Eller has that one 30-point season three years ago on his record (it was a 53-point pace per 82 games).  The Caps might be starting the season with a cheaper alternative at third-line center than they might have hoped for last season (if you think Brooks Laich and his $4.5 million cap hit could have been a credible third line center), but “cheaper” is not “cheap” in this instance.

The Big Question… Can Lars Eller be a better producer as regular third-line center than he was in a second-line role for the Canadiens?

Those ten line combinations, none of which amounted to more than 135 minutes of ice time keep coming back to mind here.  If you look at the Caps last year, and specifically Jay Beagle, you would see that Beagle spent 50 or more 5-on-5 minutes with eight different forwards (numbers from stats.hockeyanalysis.com).  That’s a lot of churn on the third and fourth lines on which Beagle played and was accompanied by the Caps taking a flyer, so to speak, on Mike Richards to provide some experience and stability on the bottom six forward lines.  On paper, at least, that is not going to be a problem this season.  Eller will be the third line center, and Beagle will anchor the fourth line.  And that third line shouldn’t experience the sort of shuffling to which Eller was exposed in Montreal last season.

There might be a question about who it is that will get the most work on the right side of that line, but it isn’t hard to see Eller and Marcus Johansson on the left side spending a lot of time together on that line.  The pairing of those two could help Johansson, whose possession numbers slipped last season (49.4 Corsi-for at 5-on-5 compared to 53.1 percent the previous year, according to Corsica.Hockey).  It might be a stretch to think he will get to 50 points, given the lack of power play time and the third line minutes he is likely to get.  But 30-35 points would not be out of the question, an improvement over his production of the last three seasons.

The Caps did not lose their second round playoff series to the Pittsburgh Penguins last spring because Sidney Crosby and Evgeni Malkin had big numbers.  They were beaten by the likes of Nick Bonino (2-3-5 in the series) and Carl Hagelin (3-4-7).  Lars Eller, like each of those Penguins before last spring, is a veteran who has toiled in largely anonymous fashion (Eller actually has about 100 more regular season NHL games than either of those two players).  And, he is a player who once put up five goals and 13 points in 17 postseason games (2014).

Eller will not be expected to carry the offense in any sense, but he does have the potential to add some punch at that end, or at least provide some stability around which his wingers can perform.  And, he is a solid two-way player with good defensive instincts and possession numbers.  As this as the margin was between winning and losing last spring, those qualities could be just what the Caps need to go just that much deeper into the postseason in 2016-2017, just the change in direction both Eller and the team would welcome.