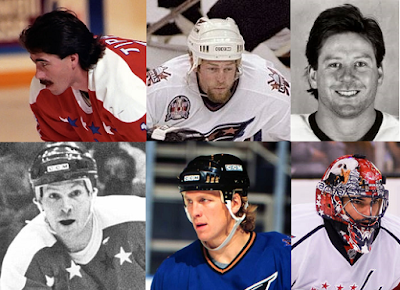 As we begin the Training Camp 2.0 phase of the NHL season, we are approaching the end of our “Peerless Playback” of the All-Alphabet team.  We are down to “All-Team T,” the original version of which was published in August 2014.  That team looked like this:

All-Team T has little to distinguish it among the All-Alphabet Teams.  None of the skaters had as many as 20 goals for the Caps, and the leading goal scorers – Greg Theberge and Mark Tinordi (16 goals apiece with the club) – were defensemen.  Only Tinordi played in more than 200 games as a Cap (264), and only Theberge among the others dressed for more than 100 games (153).  As a group, the five skaters participated in only 50 postseason games, totaling three goals and ten points.

Tinordi was perhaps the most accomplished of the skaters overall, but he came to the Caps in the second half of his career and was plagued by injuries to an extent that he played more than 60 games only once in five years with the club.

Tippett was cut of similar cloth among the forwards, building a reputation as a good defensive forward in seven seasons with the Hartford Whalers (four times earning votes for the Selke Trophy as best defensive forward).  He never really was able to match that level of performance, on either the defensive or offensive sides of the puck, in his two seasons in Washington.

Theberge has the distinction of being one of the few players drafted by the Caps 100th overall or later (109th overall in the 1979 Entry Draft) to play in more than 100 games for the Caps (153 games), but his was not a distinguished career otherwise.

Replacements for skaters on All-Team T should be possible but for one thing.  Since 2014, the Caps have had no skater dress for a game with a last name starting with the letter “T.”  The skaters from 2014 are the skaters who remain in 2020.

In goal, Jose Theodore was the original pick in 2014.  It was not as if it was a deep pool from which to select a goalie, Rick Tabaracci being the other eligible goaltender at the time.  Now, almost six years later, Theodore remains because the Caps have employed so few goalies over that time (five), none of whom have last names starting with the letter “T.”

What we are left with is the original All-Team T, a squad with limited experience with the Caps among the skaters, and generally unimpressive production in what games they played as a group.  The lack of offensive punch is not overcome by the physical edge a Mark Tinordi provides or the defensive skill of a Dave Tippett (and that was more evident in his Hartford days).  A lot of pressure would be placed on goaltending, and it isn’t clear Jose Theodore would be consistently up to that challenge.

Posted by The Peerless at 12:43 PM No comments: