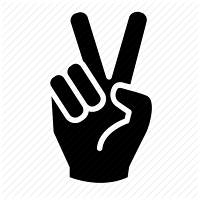 The Washington Capitals wrapped up a four-game road trip with a visit to New Jersey to face the Devils on Tuesday night.  It was a case of a skilled veteran team taking advantage of a young team without a lot of depth, the Caps taking a 4-1 decision to win the season series, three games to one.

Early in the first period, Brett Connolly collected a loose puck at the Devils’ blue line and worked in deep to the end wall, where he slid it to Nic Dowd.  Curling out from behind the net, Dowd found Andre Burakovsky along the left wing wall.  Burakovsky eased out from the wall and fired a shot through the legs of Eric Tangradi and over the left shoulder of goalieMacKenzie Blackwood and into the far top corner to give the Caps a 1-0 lead 2:52 into the game.

The Caps held that lead until the last minute when a mistake was turned in the tying goal.  Off a turnover, the Devils gained the offensive zone and worked the puck in deep.  Joey Anderson’s centering attempt clicked off Evgeny Kuznetsov and out to the blue line and the stick of Kenny Agostino.  Wasting no time, Agostino sent a slingshot low to the ice and past the right pad of goalie Pheonix Copley to make it 1-1 with just 1.0 seconds left in the period.

-- Washington did not record a shot on goal in the last 8:00 of the period.  New Jersey had only three in that span of time.

-- Burakovsky’s first period goal was his 12th, matching his total for last year.

The Caps broke the tie in the sixth minute.  Carl Hagelin found Christian Djoos along the left wing wall.  From the point Djoos wound up and fired, but not a shot, rather a pass to Brett Connolly who was closing on the net from the other side.  Connolly redirected Djoos’ feed behind Blackwood to give the Caps a 2-1 lead 5:57 into the period.

Washington doubled their lead in the twelfth minute.  Evgeny Kuznetsov broke out of the defensive zone, and Jakub Vrana found him with a pass.  Kuznetsov skated in with T.J. Oshie on a 2-on-1, held the puck, and ripped a shot through the pads of Blackwood at the 12:16 mark.

The Caps took barely a minute to make it a three-goal lead.  Nicklas Backstrom skated the puck down the middle into the offensive zone and laid it off to Alex Ovechkin on the right side.  Ovechkin stepped up and then fed Tom Wilson on the left side.  Wilson snapped a shot that hit the inside of Blackwood’s left pad and caromed into the net to make it 4-1, 13:28 into the period.

-- Connolly’s goal was his 20th of the season, the first 20-goal season of his eight-year career.

It was quiet.  Very quiet.  You could cut the quiet with a knife.  A butter knife.  Or maybe a fork.  Perhaps one of those plastic spork things…

-- Nicklas Backstrom’s assist on Tom Wilson’s goal was his 50th assist of the season.  It is Backstrom’s sixth straight season with 50 assists.  That makes him only the 26th player in NHL history to record 50 or more assists in six consecutive seasons, and one of two active players, Joe Thornton being the other (he did it in seven consecutive seasons from 2002-2003 through 2009-2010).  And if you are wondering, the longest consecutive 50-assist streak Sidney Crosby ever had was two season (four times).

-- Alex Ovechkin had no shot attempts.  None.  Alert the media!

-- This was the seventh game this season in which Brett Connolly scored a goal on his only shot on goal.

-- The Tom Wilson one-two-three… one goal, two blocked shots, three hits.  He was the only Capital with more than one blocked shot.

-- Christian Djoos had an assist, giving him points in consecutive games.  Okay, so the first one was the last time he dressed, back on February 23rd against Buffalo.

-- That is six straight wins for goalie Pheonix Copley and with 20 saves on 21 shots, it is the first time he registered consecutive appearances allowing fewer than two goals (33 saves on 34 shots against Winnipeg on March 10th).

-- Dmitry Orlov had five of the Caps’ 15 credited hits.

Business tended to.  Now, back home for the rematch against Tampa Bay.

The Peerless Prognosticator is ON THE AIR!!! -- Game 74: Lightning at Capitals, March 20th

Four days ago, the Washington Capitals and the Tampa Bay Lightning met in Tampa.  On Wednesday night, they meet again, this time in Washington.  Not much has changed in the intervening days, so go read this again for a refresher.

But there are some fun facts and nifty nuggets of information you might like or use to impress your friends. This will be the 64th meeting of the teams in Washington in the history of the series.  Tampa Bay has won only 12 times in regulation.  The 12th time was the last time the teams met in D.C., a 4-2 win for the Bolts last February 20th. Odd thing about that game; the Lightning had only 19 shots on goal.  It was the second time in a span of four games in Washington that Tampa Bay generated only 19 shots.  Including that game, the Caps are 22-3-2 in their last 27 regular season games against Tampa Bay in Washington, dating back to March 2007.

Over those 27 games, the Caps…

And individually in those games…

It is a tale of dominance not seen often in the NHL.  However, this will be the back half of a back-to-back set of games, too, against the league’s best team.  It is the last such instance this season for the Caps.  Some tidbits from the first 12 instances… 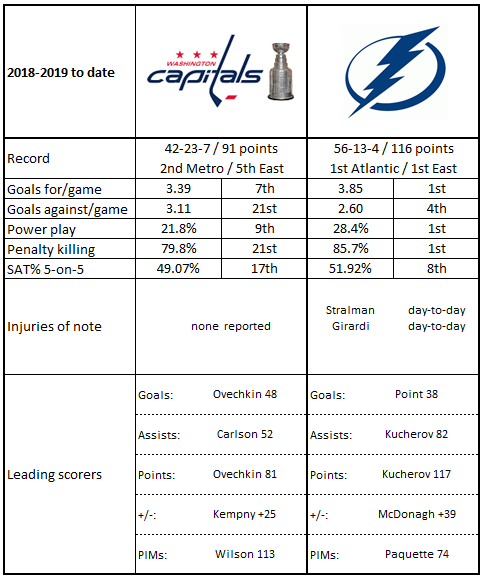 And there you have it.  The game on Saturday was a nail biter right up until Jakub Vrana hit a post, and the Lightning scored the first of two empty net goals shortly thereafter.  This game should be as close with additional hot sauce added being whether the Lightning can back up their physical approach displayed in Tampa on the opponent’s ice sheet.  We don’t think so.