The Peerless Prognosticator is ON THE AIR!!! -- Caps vs. Canadiens, November 20th

Homecoming. The Caps return home after a visit to the Big Apple for games against the Devils and the Rangers. Tonight, it’s the Montreal Canadiens, and the Caps will be playing host with a thinner lineup. Alexander Semin is out with a wrist injury, Jose Theodore is out tending to personal matters, Boyd Gordon’ balky back will keep him on the shelf, Mike Knuble is waiting on his finger to mend, Quintin Laing is contemplating which body part he will sacrifice next to the gods of hockey while his jaw mends, Milan Jurcina is nursing a lower body injury, and Shaone Morrisonn is suffering a case of “knocked-into-next-week-itis.”

What that means is that some guys will have to step up and fill the bill, and none is more greatly anticipated than John Carlson, defenseman late of the Hershey Bears, who makes his NHL debut this evening.

“Gonna be a real player…”

Why, it’s The Big Guy, himself. Arthur Carlson, the old station manager at WKRP in Cincinnati. Are you guys related?

“All of us Carlsons are related in some way and…. Well, no.”

And you came all the way from Cincinnati to see the youngster’s debut. How are things in the radio business these days? Still doing rock-and-roll?

“Oh, yeah… the gang is still there… Andy, Fever, Venus, Bailey, Jennifer, and of course, Les.”

“Absolutely. But they only let him on during the midnight shift. Something about the way he dresses scaring small children...”

You much of a hockey fan, Art?

“Oh, yeah. Used to have tickets to see Pittsburgh.”

“Yeah, well… I went to a playoff game a couple of years ago, when the Penguins were playing the Red Wings?”

“I thought I could start a tradition, you know, like that thing with the octopus the fans in Detroit are famous for.”

How do you mean?

“As God is my witness, I thought penguins could fly.”

While we try to get that image out of our heads, this is the beginning of Canada Weekend for the Caps – tonight’s game against Montreal, a visit to Toronto tomorrow night, and a hop over to Ottawa against the Senators on Monday. The Canadiens have been wallowing in mediocrity over the last eight games, going 4-4-0 over that span. It is a microcosm of their season, which at the moment has them sitting at 10-11-0. Their numbers (going into last night's action) don’t improve on the image of their record… 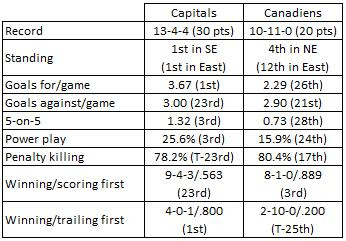 Montreal has 48 goals scored this season (not including the ones they award in the standings for winning a Gimmick). Tomas Plekanec has had a hand in 19 of them (39.6 percent). He is tied for the team lead in even strength scoring (6-9-12) and leads the Canadiens in power play scoring (1-6-7). You’d have to think, if the Canadiens are to do anything on the ice, he’s going to be involved. He has certainly made life hard for the Capitals. In 16 career games, he is 6-8-14, plus-7. And, he’s coming into this game with five assists in his last three games.

Mike Cammalleri is tied for the team lead in goals, with eight. After potting 39 with Calgary last season, he’s a bit behind that pace. It might be worse than that. After starting the season without a goal in his first six games, he went on to notch seven in his next nine games, including a hat trick topped off with the game-winning goal in a 5-4 overtime win against the Rangers. Since then, though, he has one goal in his last six games. If streaky has been his M.O. this year, let the one he’s on continue another game. He doesn’t have much in the way of history against the Caps, going 2-2-4 in four career games.

Plekanec and Cammalleri will have to be on top of their games, because the player with whom Cammalleri is tied in goals – Brian Gionta – is out with a broken foot. That’s one-sixth of the team’s goal scoring on the bench for a team that is already mired in 26th place in scoring. After Cammalleri and Gionta, no other Canadien has more than four goals.

With offense at a premium for Montreal, the defense would be expected to have a bright light shined upon it, but the problem here – even more than at forward – has been injuries. Andrei Markov is, and will be out for several months with an ankle tendon injury that required surgery. Hal Gill is on injured reserve for the next couple of weeks, at least, with a foot injury. Ryan O’Byrne has been on the shelf with a knee injury, but has been cleared to play tonight against the Caps.

Montreal will, however, have the benefit of dressing a trio of defensemen long in experience. Roman Hamrlik, Jaroslav Spacek, and Paul Mara have a total of 2,559 games of NHL regular season experience among them. All of them are averaging more than 20 minutes a game, Hamrlik sitting in the league’s top-ten in ice time (25:26/game). None of them individually – well, even combined, will make up for the loss of Markov’s offense from the blue line. Hamrlik has no points in his last seven games, Spacek has one (an assist) in his last eight, and Mara has one (an assist) in his last dozen games. They’ll have to be pulling their share of the load in the defensive end against the highest scoring team in the league.

The Canadiens' offensive troubles will mean an added burden on goaltender Carey Price. And hasn’t he had a change in fortune over the past two-plus seasons? After joining the Hamilton Bulldogs late in the 2006-2007 season and backstopping them to a Calder Cup championship, beating the Hershey Bears in the finals, great things were more than expected for Price, they were assumed as the natural arc of his career.

1. It’s only blue, white, and red. If the Caps can forget the whole “bleu, blanc, et rouge” thing, they should dispose of the Canadiens in short order. Montreal hasn’t posted wins in regulation in consecutive games this season. They only have one win in regulation in their last 12 games, and that was against Phoenix.

2. Lend a helping hand. It’s the kids’ weekend in goal, with the streaking Semyon Varlamov (8-1-0) and the call up, Michal Neuvirth. You would like to keep the young guys from facing a ton of shots. The Caps have done a good job of limiting shots lately, allowing an average of 29.4 a game over their last eight games since allowing more than 40 in consecutive outings against Philadelphia and Atlanta. They haven’t allowed more than 32 in any of those nine games and allowed only a total of 43 shots in their last two games, against New Jersey and the Rangers.

3. BGP. It stands for “Big Game Player.” And any game against Montreal can probably be considered “big.” In his last six games against Montreal at Verizon Center, Alex Ovechkin is 6-6-12, and among those games he includes a four-goal performance and a goal that if it was on anyone else’s resume, would be their career highlight. The bank-it-off-the-boards-backwards, outrace-the-defenseman, get-hauled-down, and still-poke-the-puck-in goal he scored on Carey Price last year is merely second on the Ovechkin top-ten.

Do you see any problems with this one, Big Guy?