“The long and winding road that leads to your door
Will never disappear.
I've seen that road before it always leads me here;
Leads me to your door.”
-- Paul McCartney

Maybe it was the day.  The 13th.  On December 13, 2007, Mike Richards signed at 12-year, $69 million contract with the Philadelphia Flyers.  At the time he said, "I want to be here, I love the city, I love the organization and when I was given the opportunity I was excited to be here over the next twelve years."  Less than five years later, he was gone, traded to the Los Angeles Kings with Rob Bordson in June 2011 for Brayden Schenn, Wayne Simmonds and a second-round draft pick in the 2012 Entry Draft.

It was the start of a literal and figurative journey for Richards that had its high points – two Stanley Cups with the Kings – and its lows.  It did not get any lower for Richards than what happened in June 2015 and the weeks that followed.  Stopped at the U.S.-Canada border for alleged possession of a controlled substance, having his contract terminated by the Kings, charged by authorities in Canada, the Kings and the NHL Players Association coming to agreement on a settlement in which Richards would receive roughly half of the remaining value of his contract, playing hockey was not on the program for Richards.

As the end game of this low drama was playing out, though, theCapitals were pondering whether to act on their interest in Richards.  After a long dance that lasted from October to early January, the Capitals signed Richards to a one-year pro-rated $1 million contract.  Ten days later, 282 days after he last stepped on an NHL rink for a game, he was in the Caps’ lineup.

It would make for a happy story to say that Richards returned to the NHL and was successful in resuming his career, but to be charitable the jury is still out on that question.  Richards appeared in 39 regular season games for the Caps, not missing a contest once he joined the lineup, perhaps more a testimony to his desire to get back into the game than his stamina.  In fact, he was a shell of his former self.  In those 39 games he managed just two goals and five points while averaging just over 12 minutes of ice time a game, primarily as a fourth liner, the lowest average ice time of his 11-year career. 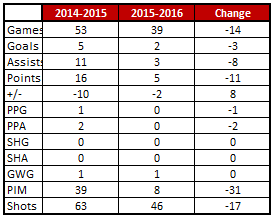 Fearless’ Take… Richards’ numbers were poor, there is no denying that.  But he did provide some value.  He was 50 percent or better on faceoffs in 21 of the 39 games in which he played.  The Caps won all five games in which he recorded a point.  They only lost one game in regulation in which he logged at least 13 minutes of ice time.  His Corsi-for at 5-on-5 was a respectable 51.78, and his Corsi-for/Relative of minus-0.12 was hardly poor for a fourth liner.  He even showed signs of contributing more offense in the latter stages of the season.  Three points in his last ten-game segment (actually 12 games) is a modest total, but it was the best of his four ten-game segments.

Cheerless’ Take… You’re diggin’ pretty deep to find a gold nugget there, cuz.  He had five points in 39 games.  The guy he pretty much replaced – Mickael Latta – had seven points in 43 games.  Richards was a minus-2, Latta was even.  Richards had a 49.5 percent faceoff winning percentage on 475 faceoffs, Latta was 51.5 percent on 198 draws.  Richards had a score-adjusted Corsi-for at 5-on-5 of 51.77, Latta had a 52.62.  If you didn’t know who they were, who would you have said was more productive?

February was a good month over its first three weeks for the Caps, who built an 8-2-0 record through the 21st.  On the 22nd the Caps hosted the Arizona Coyotes, a team not having much success of their own in February with a 3-5-1 record heading into their game against the Caps.  After a scoreless first period, the Coyotes broke on top with a Kevin Connauton goal early in the second period.  The Caps tied the game on a power play goal by Evgeny Kuznetsov less than three minutes after the Connauton strike, then took a lead mid-way through the third period on a goal by Alex Ovechkin.  The sound of the goal horn had barely faded away when the Caps struck again.  It started with a Tom Wilson drive from the right wing circle than was flagged down by goalie Louis Domingue.  However, Domingue’s attempt to smother the puck with his glove was stifled by teammate Brad Richardson, who came it to try to move the puck away from danger.  That gave Wilson a chance to follow up his own shot, and he poked the puck free of both Domingue and Richardson.  Mike Richards curled in behind Wilson to get to the loose puck and whip it past Domingue’s glove to make it a 3-1 lead for the Caps and set Domingue off in search of an official to complain to that he covered the puck.  When Connor Murphy scored later in the period for the Coyotes, Richards’ goal was not only his first as a Capital but the game-winning goal as well, his first game-winning goal since recording one with the Kings in a 4-0 win over the Minnesota Wild on November 26, 2014.

By this time in the season, everyone associated with the Capitals might have been forgiven for just wanting the last couple weeks’ worth of games over and done with so that they could get on to the playoffs.  At times, it showed.  It did for the Caps in Game 79 of the season when they hosted the New York Islanders.  The Caps scored first, a goal by Alex Ovechkin less than five minutes into the game, and scored often, getting out to a 3-1 lead early in the third period.  By that time, Mike Richards had been an infrequent participant in the game, logging only 6:23 in ice time.  Then, it got worse, both for him and the Caps.  The Islanders scored goals 1:45 apart mid-way through the period to tie the game, then won it 2:13 into overtime.  Over the last 15:17 of the game, including overtime, Richards skated just one 28-second shift.  Oddly enough, he led the Caps’ forwards in shorthanded ice time in the game (51 seconds), but finished the game with just 6:00 in even strength ice time.  His total of 6:51 was a season low, and adding just one shot on goal while going minus-1 didn’t help matters.

Mike Richards has had an odd history as a playoff performer.  Coming into this season he was 26-61-87 in 124 career postseason games.  That is a rather respectable 17-39-56 scoring pace per 82 games.  After the 2016 postseason, Richards how has 136 games on his resume, but the scoring needle didn’t budge.  No points in 12 games.  And that raises the other, odd aspect of his postseason career.  He has never been that much of a possession guy.  That might owe itself to tough defensive assignments, but the fact is that in eight seasons of postseason appearances, Richards was above 50 percent Corsi-for at 5-on-5 just twice.  He did not make it three times, going 49.5 percent for the Caps in what was actually his third-best result in his career.  His “relative” numbers have been even worse over his career, finishing in minus territory in each of his eight previous playoff appearances.  In 2016 that number grew to nine (minus-2.9; numbers from war-on-ice.com).

What made this year a bit different for Richards on that score was the nature of the responsibility he had and how it was reflected in the playing context.  He is, at this stage of his career it would seem, primarily a defensive forward, and this was reflected in his numbers (perhaps influenced by the quality of opposition faced).  The 57.9 shot attempts against per 60 minutes on ice at 5-on-5 was the second-lowest of his postseason career.  And, in one more odd twist, the 56.7 shot attempts for on ice per 60 minutes was the second highest of his career.  Overall, though, he was one of several Caps among the bottom nine forwards whose offensive contributions were negligible.

Perhaps if Richards did not make his debut until mid-season.  Perhaps if he had a full training camp to get back into a hockey frame of mind after all of the issues he had to deal with off the ice.  Then again, without those events and that timeline, he very well would not have been a Capital.  In the obvious indices of production, Richards was not so much a disappointment (given his circumstances) as he was unable to effect a “happy ending” sort of story.

From Philadelphia to Los Angeles to personal difficulties to a return to hockey, the road Richards has traveled over the past five years has certainly been a winding one.  What is not known is where that road now leads.  Richards is a free agent.  Perhaps with that full training camp and a chance to put his difficulties further behind him, he would be an asset to the Caps going forward.  Or, perhaps the wear and tear on a body that often played bigger than it is and his time away from the game have robbed him of whatever edge he could coax out of himself on the ice.  As Mike Richards heads into an offseason as a free agent, he is unlikely to be among the most sought after players, but the journey he takes will be among the most interesting to follow.