Mike Green
Theme: You win some, lose some, and wreck some.
-- Dale Earnhardt

The Capitals returning to a playoff-caliber brand of hockey in 2007-2008 was accompanied by the emergence of Mike Green as an offensive force from the blue line. In three regular seasons starting with that 2007-2008 season Green recorded 68 goals, 137 assists, and 205 points, while going plus-69 in 225 games. He came into the 2010-2011 season having built a reputation as the best offensive defenseman in the NHL. Except…

…but it would be the high water mark for Green’s season. His fortunes mirrored those of his teammates during that 0-6-2 stretch in December. He missed two of those games with the flu and was 0-1-1, minus-3 in the other six. It was a slump from which he never really recovered. Over the following 20 games after the losing streak Green went 4-7-11, plus-5.

In that 20th game, though, the wheels really began to fall off for Green’s season. On February 6th, the Caps hosted the Penguins in Washington. With three seconds left in the first period, Pittsburgh’s Brooks Orpik let fly with a one-timer that hit Green in the ear. He did not return for the rest of that game and would, in fact, play in just one of the following seven games before returning against the New York Rangers. Green lasted two shifts. On the second one, he and Ranger Derek Stepan went into the Olympia corner at Verizon Center, and Green was left on the ice, much worse for wear, having taken a check from Stepan moments before Ranger defenseman Steve Eminger scored the first goal in a 6-0 Ranger rout. It would be the last shift Green would take in the regular season.

Since becoming a full-time starter in the 2006-2007 season, Green finished the 2010-2011 season having played the fewest number of games over the five-year stretch (49), recording his second lowest goal total (eight), second lowest point total (24), and second worst plus-minus total (plus-6). If one is comparing this season with Green’s 2009-2010 season, this one was more or less a lost season… 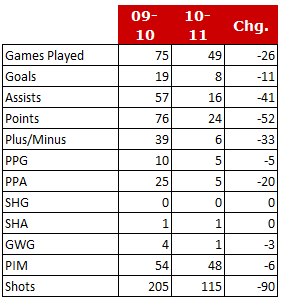 And this now raises concerns about Green’s durability. He will only turn 26 in the first month of next season, but in the last three seasons he missed 15, seven, and 33 regular season games. The absentee chart looks like this (from tsn.ca):

The last two absences would appear to have been the result of concussions. Then, upon returning in time for this year’s first round playoff series against the New York Rangers, he took a shot from the Rangers’ Matt Gilroy in the head in game five with such force that it popped screws loose from his helmet.

It would be easy to say that Mike Green is a marked man, that as a puck carrier – the puck carrier from the Capitals’ blue line in recent years – that teams will target him on the forecheck with an aim toward punishing him with hits. But two of the three head shots he took this year came on shots, and the third – the hit from Derek Stepan – might have been a case of an aftershock of the first concussion he suffered, the product of a shot he took off his ear by Brooks Orpik. Nevertheless, as much as fans might want Green to return to something approximating his production over the 2008-2010 period, the first order of business in 2011-2012 will be answering the question, “can he stand up to an 82-game schedule?”

Game to Remember… October 30, 2010. In the 2009-2010 season, when Mike Green recorded 76 points in 75 games, he had only one game in which he had at least three points. On October 30th, he had his only three-point game of the 2010-2011 season. With the Caps trailing, 2-0, after barely 11 minutes had gone by in Calgary against the Flames, Green assisted on a Nicklas Backstrom power play goal late in the first period to halve the deficit. He then assisted on an Alex Ovechkin power play goal early in the second period to tie the game. After Ovechkin netted another power play goal 12 seconds later to give the Caps the lead, Green potted a goal of his own at even strength at 10:28 (one of only three even strength goals he would have for the season). It was part of a six-goal explosion in the second period against the Flames in a 7-2 Caps win. Green not only recorded his only three-point game of the season by added a pair of takeaways, as well as three hits and three blocked shots.

Game to Forget… February 12, 2011. After Green took one in the ear hole against the Penguins on February 6th, he sat out the next game against San Jose. Green returned on February 12th against the Los Angeles Kings, and in retrospect, maybe it wasn’t such a great idea. The Caps took an early lead on an Alex Ovechkin goal, but the Kings came back to score four unanswered goals, the first three of which were scored with Green on the ice. He added a roughing penalty as if for good measure and finished the evening with the only minus-3 night of his regular season, one that would have but one more game to play, courtesy of Derek Stepan.

Post Season… A Tale of Two Mikes, as it turned out. Green returned to the Caps lineup for Game 1 against the Rangers in the first round. He assisted on the game-tying goal in the third period in a 2-1 overtime Game 1 win for the Caps. Then, he added assists in each of the next three games as the Caps built a 3-1 lead in games. Luck was not a commodity in long supply for Green this season, though, and in Game 5, despite having already recorded a power play goal, he managed to skate only six shifts, the last of which ended when he took that shot from Matt Gilroy off the helmet. After that, well, Green’s fortunes mirrored those of the Caps against the Tampa Bay Lightning in round two. He played in the first three games, recorded an assist, and was minus-1 in each of the three games. He suffered one more injury in Game 3, sitting out the third period of a 4-3 loss, then sat out the season finale as the Caps were swept out of the playoffs by Tampa Bay.

In the end, there was no end. Green didn’t get off to a start that suggested he would keep pace with the offensive numbers he put up in the previous three seasons. But he was a better defensive player and was still chewing up large chunks of ice time. That would last barely half a season. A decent first half was derailed by injuries in the second half that raise more questions about his future than memories of his performance. And the answers to those questions could go a long way toward reversing the disappointment the Caps experienced once more in the spring.


Grade: Incomplete
Posted by The Peerless at 12:50 AM 2 comments: