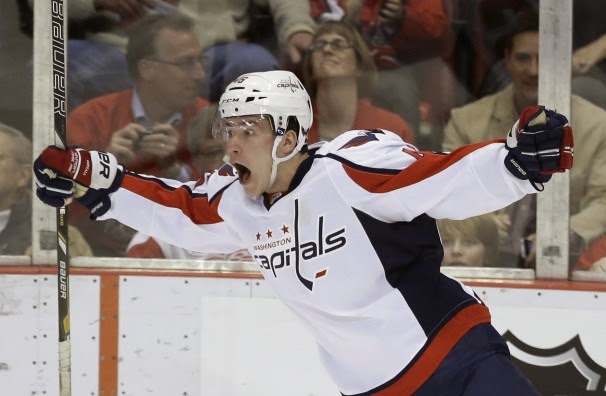 In Game 3 of the ten games that mattered for the Washington Capitals this season they kicked off a new rivalry with an old opponent.  In doing so, some familiar early season trends were being further established for both clubs.

The Background:  Until the realignment for the 2013-2014 season that put the Washington Capitals and the Detroit Red Wings in the same conference, the two clubs had not occupied the same conference since the Red Wings and Caps were part of the Norris Division of the Prince of Wales Conference in 1978-1979.  How long ago was that? Only four members of the Red Wings who dressed for this game had been born when that took place and none of the current Capitals.  In the intervening 33 seasons the teams met just 69 times, the Caps holding a slight 30-28-9-2 edge (oh yeah, there was that Stanley Cup finals thing, too).

Moving to the present, the Caps went into this game on a 5-1-1 run to start November, although three of those five wins came in extra time.  The Red Wings went into the contest having lost four in a row, the last three of them in extra time.  They also found themselves curiously unable to win games at home with any regularity, sporting a record of 3-2-5 (0-1-5 in their last six home games) as they took to the ice at Joe Louis Arena.

Why it Mattered:  When visiting an opponent that struggles on their own rink, it is good to score first and disabuse them of any notion that this game will right the wrongs and end the agony.  It took a while, but the Caps did just that, taking advantage of some dodgy Red Wings efforts.  The play started when defenseman Danny DeKeyser tried to hit Justin Abdelkader at along the wall at the Caps’ blue line.  Steve Oleksy blocked the attempt, then threaded the puck past DeKeyser to Brooks Laich at the Detroit blue line.  Laich sped down the right side with the Wings’ Johan Franzen and Kyle Quincey in pursuit to try to cut Laich off from the net.  Both Red Wings tried to poke the puck off Laich’s stick, but Laich managed to get a shot on goalie Jimmy Howard that might or might not have been deflected by either Franzen or Quincey’s stick.  The puck hit Howard in the winged wheel logo of his jersey but popped up into the air before he could pin it to his chest with his glove.  Neither Franzen nor Quincey bothered to take Laich out of the play after the original shot, and Laich took advantage of that lapse to take a second swipe at the puck as it dropped to the ice.  The second time was the charm as Laich backhanded the puck past Howard’s left pad and in to give the Caps a 1-0 lead.

The Caps could not hold that lead as far as the first intermission.  Detroit came back with goals 2:18 apart late in the second period, the first on a power play on a low angle shot by Franzen from the left wing circle that beat goalie Braden Holtby over his right shoulder and off the near post.  Franzen got the second one, too, when from the right wing corner he fed the puck to Tomas Tatar behind the Caps net, then circled out and all the way around to the goal line extended to Holtby’s right.  He took a return feed from Tatar in stride and snapped a shot that Holtby got a piece of with his right pad.  It was not enough, though, merely deflecting the puck up and into the back of the net to give Detroit a 2-1 lead at the first intermission.

The second period was relatively quiet until Tom Wilson took a holding penalty with 2:06 left.  On the ensuing power play DeKeyser atoned for his mistakes on the Laich goal by one-timing a cross-ice feed from Franzen past Holtby to give the Red Wings a 3-1 lead with just 12 seconds left on the power play and 18 seconds left in the period.

The Red Wings might have solved their home ice problems except for the minor detail of there being 20 more minutes left to play.  The Caps scored early in the third when the Caps got the puck in deep where Marcus Johansson found Alex Ovechkin at the bottom of the left wing circle.  Ovechkin one timed the puck through defenseman Nicklas Kronwall’s legs, over Howard’s blocker and off the crossbar to cut the lead to one goal.

The Caps made it all the way back mid-way through the period on a play started when the Caps applied offensive zone pressure, getting the Red Wings to chase the puck as the Caps worked it around to John Carlson at the right point.  Carlson fired a shot that reached the net as Jason Chimera was crossing Howard’s line of sight.  The distraction kept Howard from fielding the puck cleanly, the puck squirting to Howard’s right.  Michael Latta jumped between Quincey and Pavel Datsyuk to backhand the loose puck into the Detroit net for his first NHL goal that tied the game at 3-3.

That would do it for the scoring in the hockey portion of the evening.  That left it to the trick shot phase, and it was true to its nickname.  After the teams exchanged unsuccessful attempts in the first two round, Detroit’s Todd Bertuzzi stepped out to open round three.  Bertuzzi picked up the puck at the center dot, looped to his right and skated through the right wing faceoff circle.  Then, as he cut into the low slot he tried to effect a spin-a-rama move to freeze Holtby.  It had a certain “dancing bear” aspect to it that was enchanting.  It was also unsuccessful.  Holtby poked checked the puck off Bertuzzi’s stick, leaving it up to Nicklas Backstrom in the bottom half of the third round.  Backstrom displayed a more subtle form of trickery.  Skating in from center Backstrom bent right, then moved down the middle where he opened the blade of his stick to suggest he might go over Howard’s blocker.  Howard bit on the move, opening his five hole.  Backstrom wasted no time capitalizing on the opening, firing the puck through Howard’s legs to give the Caps a 4-3 win.

The Takeaway:  For the Caps it was just the ninth visit to Detroit since the teams met in the Stanley Cup finals in 1998.  The win made the Caps 4-3-2 in those nine meetings in Detroit.  More important, the win and the extra standings point drew the Caps to within a point of the Red Wings in the conference standings.  It also was the first time the Caps came back from a two or more goal deficit to win a game since they defeated Calgary, 5-4, after falling behind by three goals twice in the Caps’ home opener.  This contest would be an interesting debut of the season series.  All three of the meetings of these teams in 2013-2014 would go to extra time, the Caps winning twice.

For Michael Latta, that first NHL goal would be his only NHL goal of the season; he would play only seven more games for Washington before being sent down to Hershey permanently on January 11th.  At the other end of the forward lines, the goal by Ovechkin and assists by Johansson and Backstrom on the play gave each of the members of the top line 15 or more points (Ovechkin and Johansson with 15, Backstrom with 16).  For Backstrom it was the fourth of what would be seven trick shot goals in the 2013-2014 season and his second of what would be four game-deciding goals.

It was a hard earned win, but it was part of a deceptive stretch of games for the Caps.  The win made the Caps 6-1-1 in November, but four of the wins came in extra time, three of them by the Gimmick.  The wins were welcome, but it was part illusion, too.  The Caps were depending too much on fate and circumstance, going 6-1 in all extra time games (5-1 in the Gimmick) with this win.  They would go just 8-13 in extra time games over the rest of the season (5-10 in the freestyle competition).  One could see that the Caps had the capacity to come back from deficits.  But one could also see in this game that they were playing with fire and very well might be burned as the season wore on, which is why this game mattered.

Posted by The Peerless at 2:41 PM No comments: