Go to the polls 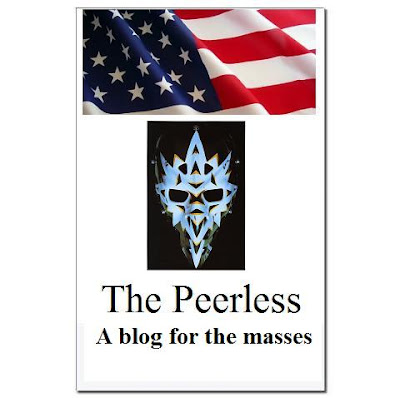 Seems there is a "blog-off" underway sponsored by the fine folks over at NHL Arena.

So get out and vote... early and often.
Posted by The Peerless at 11:51 PM No comments:

The Peerless Prognosticator is ON THE AIR!!! -- Caps vs. Hurricanes, November 20th

The Turkey Day weekend is winding down, and after gorging ourselves silly on turkey, stuffing, cranberry sauce, pumpkin pie, and all the usual suspects lurking on dinner tables at this time of year, we are back to prognosticating on the Capitals, who will be visiting the Carolina Hurricanes in Raleigh tonight. The Hurricanes have had a tough…

“Is the coast clear?”

Ugh… we must have had too many drumsticks. Now we’re seeing a talking turkey…

“Courage?” What sort of name is that for a turkey?

“You should have seen what they named the other one…”

“Yeah, that guy who lives in the big white house pardoned two of us this year. The other one was named, ‘Carolina.’”

“Yeah, must have been named after the hockey team… Hurricanes… five wins, 21 losses… turkey…”

Ah, obviously. So, you were pardoned?

“Yeah, then they wanted to send us to Disneyland and ride in a parade, then send us to something called ‘Santa’s Reindeer Round-Up.’”

So, what’s wrong with that?

“Hey, Einstein… what do you think happens to turkeys after Christmas and the ol’ round up moves on?”

Hmmm… never thought of that.

“Well, Carolina and I… we decided we were bustin’ out of that place faster than you could say, ‘pass the gravy.’”

“I dunno, man. She went nuts… she went all gobbler on me and took off. Now I’m on the most-wanted list, and not just for my delicious giblets. But it was the dame.”

And now you’ve flown the coop, as it were.

And you’ve picked a hockey arena?

“Hey, these guys are 25th in attendance. Besides, they’re into that whole pork barbecue thing down here. Hiding out here is like being in the witness protection program. No one’s going to find me here.”

The Capitals find themselves in Carolina tonight to end the month of November. In one of the quirks of NHL scheduling, the Caps are in Raleigh to face the Hurricanes for the first time this season in the 27th game on the schedule. In fact, the Caps have played more games against the Western Conference so far (3-1-1 record) than they have against their fellow Southeast Division clubs (4-0-0). So, some catching up is in order. The Hurricanes are 5-16-5 for 15 standings points. That puts them on a pace for a 16-50-16 season (48 points). At that pace, Carolina would…

Carolina does not come upon its record by accident, as the numbers indicate… 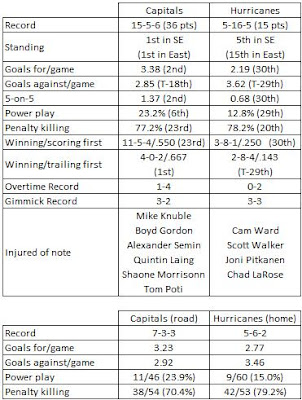 The Caps come into this game with four players on injured reserve and two more (Morrisonn and Poti) listed as “questionable.” For the Hurricanes, goalie Cam Ward is on IR, and the others range from questionable to indefinite. Health is an issue for both teams.

Health aside, though, Carolina has had a brutal season. Keep in mind, this is a team that reached the conference finals in last year’s playoffs, beating a hall of fame goaltender (New Jersey’s Martin Brodeur) and the top team in the East in the regular season (Boston) to get there. But perhaps that conference final – one in which the Hurricanes were dispatched in four games by a combined score of 20-9 – was a harbinger of things to come...

- They have one win in regulation time since October 9th.

- The Hurricanes have a 14-game winless streak to their credit this year.

- They are nursing a four-game losing streak at present in which they have been outscored 16-7.

- They have eight losses by at least three goals, only one three-goal win (that October 9th game against Florida).

- They have only three games this season in which they have more than one power play goal; they are 6-for-61 (9.8 percent) for November.

- They have five players worse than a minus-10 for the season (that would be five of the worst dozen in the league in that statistic going into Sunday’s play); they have one player with at least 20 games played who is a plus player (Stephane Yelle, plus-1 in 24 games).

- They have outscored by a whopping 40-18 in the third period of games this year.

The devil (or Hurricane) you know…

Rod Brind’Amour built a long and noteworthy NHL career as a sturdy two-way forward. In 20 NHL seasons coming into this one, he’s averaged almost 70 points per 82 games played. He also has two Selke Trophies on his resume as top NHL defensive forward. But he’s coming to the end. Perhaps it was the torn knee ligament that ended his 2007-2008 season after 59 games; perhaps it is age (he is 39) and wear (he has 1,430 regular season games played, plus another 159 playoff games). But Brind’Amour is a minus-40 in his last 106 games after returning from his injury, and the scoring pace he is on – 6-19-25 – would be his lowest over a full season of his career. He hasn’t had a goal since October 10th (21 games) and has only five assists over that span. His ice time has been cut back, too. Coming out of the lockout, here is how his ice time has progressed…

A Sutter with no penalty minutes? Considering that his father (Brent) and uncles (Brian, Darryl, Duane, Rich, and Ron) amassed a total of 7,224 penalty minutes in a combined 4,994 NHL games, you’d have to chalk up the younger Sutter’s numbers to the current NHL really being a different game. But the younger Sutter has shown a scoring touch. Since he was recalled from Albany on October 24th, he has six goals in 17 games, which ties him for the team lead in goals scored. He has slowed down a bit, having scored only one goal in his last six contests, part of it due no doubt to a reduction in ice time (averaging about 16 minutes a game over his last five after averaging just under 20 minutes in his previous seven starts).

In goal, you’d have to wonder, does it matter? Neither Michael Leighton nor Manny Legace has given comfort to Hurricane fans that they can keep the nets clean in the absence of Cam Ward, still out after sustaining a lacerated leg in a 3-2 loss at Columbus on November 7th. But there has been a glimmer of hope in the form of Manny Legace. Legace – signed only on November 9th – appeared in six consecutive games for the Hurricanes (2-3-1, 2.82, .907), starting with a relief appearance against Montreal on November 17th, before giving way to Michael Leighton in Carolina’s last game (a 5-1 loss at Buffalo in which the Hurricanes suffered a five-goals-in-barely-twelve-minute third-period meltdown).

1. Remember…it’s a rivalry. With apologies to Caps coach Bruce Boudreau and Atlanta’s John Anderson -- pals and rivals though they be -- the Capitals-Hurricanes matchup is as close to a rivalry as there is for the Capitals in the Southeast Division. Since the lockout, Carolina is 17-11-2 against the Capitals, 10-4-1 at home. It might be valuable to recall that two years ago on this date, the Hurricanes also hosted the Caps at home and with the Caps mired at the bottom of the conference standings, Carolina barely held on for a 4-3 win. There are no easy ones.

2. Make the first period the fourth period… of the Buffalo game, that is. Carolina has had a couple of days to stew in that five-goal meltdown at Buffalo. One would expect they will want to rid themselves of that memory with a fast start against the Caps in front of the home folks. If the Caps can get out fast, then it might look a little too much like the end of the Sabres game for comfort for the home team.

3. Stand on their throats. The Hurricanes are an awful third period team. When you are outscored by 40-18 in the third period of games, you deserve that adjective, “awful.” But the Caps have been too tame with clubs, guilty of sloppy play – especially with respect to taking penalties – in the third period of games this year. The Hurricanes don’t seem able to convert the gifts they get in terms of man advantages (6-for-61 in November on the power play), but why tempt fate. Show the killer instinct.

Two years ago, Carolina came into their November 30th game against the Caps with a 13-9-3 record, the Caps at 8-15-2. Carolina won the game, 4-3, but lost the war as the Capitals put on their memorable push to pass Carolina for the divisional crown and a playoff spot. History is not likely to repeat itself in terms of a Carolina resurgence, but there is little reason to give the Hurricane faithful hope.