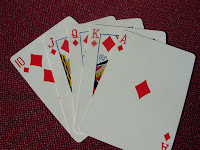 Reading Corey Masisak's superb series on the Caps this morning on NHL.com, I look at the Caps going into the 2012-2013 season and think, "draw poker." Caps GM George McPhee dealt himself Joel Ward, Roman Hamrlik, Troy Brouwer, Jeff Halpern, and Tomas Vokoun last summer. It looked like a good hand at the time, but not quite good enough.  This summer he kept the first three, discarded Halpern and Vokoun, then drew Mike Ribeiro and Wojtek Wolski. The question is, "does he hold a diamond flush, or just a bunch of red cards?"
Posted by The Peerless at 10:24 AM 1 comment:

The Consistency of Alex Ovechkin

Once upon a time, we remarked on the remarkable consistency of Alexander Ovechkin. Dividing his career games into ten-game splits, he was almost like a metronome in posting ten or more points per ten-game split. We are now 553 games into Ovechkin’s career, and as the 2012-2013 season approaches, we are left to wonder, “is he still consistent?”

Well, let’s start with the 550 games that comprise his 55 complete ten-game splits in his career:

Well, that’s clear, isn’t it? Well, maybe this will help. In 35 of his first 42 splits, Ovechkin recorded at least ten points. You could reasonably call that “consistent.” But in his last 13 complete splits he reached the ten-point mark only six times. Even though there is a certain lack of consistency in these last 13 splits (he ranges from six to 12 points across these 13 splits), there is also a “glass half full” aspect to it. That group of 13 ten-game segments cleaves into two parts, the first seven of them and the last six.

In the first seven Ovechkin still managed to record at least ten points in five of them, even if in those splits he did not reach the production level that characterized his first 420 games. In his last six, however, he reached ten points only once. Those sixty games represent the period from November 15, 2011 through March 31, 2012. That would correspond to the period of Bruce Boudreau’s last seven games as head coach (over which Ovechkin was 1-2-3, minus-6) and 53 games of Boudreau’s successor as head coach, Dale Hunter, whose offensive philosophy was not nearly as dynamic as Boudreau’s. If you are one of those “glass half full” types, you might harbor the thought that Adam Oates will be able to restore some of that lost production.

The “glass half full” types might be encouraged if we break apart the points into their goals and assists components:

The careful reader is going to look at the goals graph and say, “but Peerless, that’s a downward trending line.” True enough. But there are those two distinct segments in these ten-game splits. Looking at those first 42 splits, the trend line shows that remarkable consistency, although there is a “tail” at the end that suggests the start of a decline in production. But looking at the last 13 splits (and we know, this is a small group to evaluate) there is at least the glimmer of a player dragging himself out of a slump:

But break them into those first 42 and the last 13 splits as we did above, and things look a little different:

Ovechkin actually displayed increasing production at even strength over his first 42 splits, even with a drop-off late. But starting from that trough at the start of the second 13-split segment, he had the suggestion of coming out of that slump…

…or did he? One would have to put a lot of faith in a seven-game stretch in mid-March in which he had seven even-strength goals (nine overall). That contributes to that late spike in the last-13 split segment. But that is the unknown, too. Was he finally becoming accustomed to the locked-down style of Dale Hunter and finding a way to produce? Will he rebound further under the eye of new head coach Adam Oates?

If that question is one that Caps fans might find intriguing, it only gets more so in the case of power play goal production. Over the entire span of 55 complete ten-game splits, Ovechkin’s power play goal production has drifted downward, no doubt in large part to the diminishing opportunities he and the Caps (and the league) have been getting with the man-advantage since the lockout:

But back to the graphs. Breaking the 55 complete ten-game splits into those first 42 and those last 13 segments, there is that downward drift in the first group. But what do we make of the last 13 splits:

There was the span of ten games from December 30, 2011 through January 18, 2012 this past season in which Ovechkin recorded five power play goals. Other than that, though, he was stuck in a rut of 0-2 power play goals per ten games.

Whether Alex Ovechkin can return to the goal-scoring levels to which Capitals fans became accustomed in his first five seasons is a tale of two stories – even-strength goal scoring and production on the power play. It might be a bit much to expect Ovechkin to return to the even-strength goal-scoring rate he averaged in his first 42 ten-game splits. At that rate he would realize 36 even strength goals per 82 games played. But can he get to his career average? If so he could get to 33 even-strength goals per 82 games (he had 25 in each of the last two seasons). Is that too much to expect, even with the more balanced approach suggested with the arrival of Adam Oates as head coach?

Any way you look at this information, getting to “50” would be a long haul, largely dependent on Ovechkin’s once more becoming a 15-20 goal scorer on the power play. But unless the Caps reverse an unbroken trend toward fewer and fewer power play opportunities, Ovechkin isn’t going to come close to being that kind of power play scorer. If you are being optimistic about it, his getting 30 even-strength and 10 power play goals seems about right. This is the level of consistency Caps fans can reasonably expect moving forward.
Posted by The Peerless at 1:20 AM No comments: