Capitals vs. Penguins: Takeaways and Throwaways from Game 2 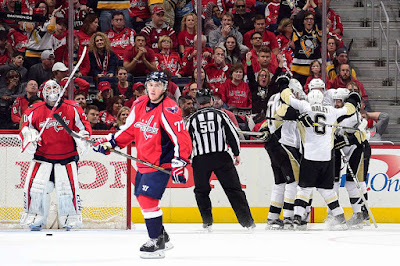 It was never going to be easy, and the Washington Capitals found that out in Game 2 of their playoff series against the Washington Capitals on Saturday night.  It was not the relatively open-offense contest of Game 1, but it was another one-goal game settled by the thinnest of margins.  The low score did not mean the game lacked for takeaways and throwaways.

The curious part of the series so far is how little impact the big stars have had.  Sidney Crosby is without a point in two games and is a minus-3.  Alex Ovechkin has an assist, but he has been blanked on seven shots on goal.  It has been T.J. Oshie (a hat trick in Game 1) versus the foot soldiers for the Penguins (Fehr and Hagelin in Game 2).  Pittsburgh has been closer to imposing its will on the Caps than the Caps have on the Penguins (Pittsburgh has a Corsi-for of 54.7 percent; numbers from war-on-ice.com), and that is something the Caps are going to have to solve as the teams head to Pittsburgh for Games 3 and 4.