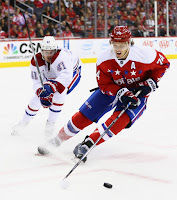 “Headlines, in a way, are what mislead you because bad news is a headline, and gradual improvement is not.”
-- Bill Gates

John Carlson is that ninth defenseman to average at least two-thirds of a point per game in at least 100 games over the past two seasons (0.68).  He established career bests in both assists per game (0.55) and points per game (0.70) last season, despite missing 25 games over two stretches with a fractured ankle, the first injury of his career to send him to the sideline.

Oddly, perhaps, the Caps did suffer undue harm with Carlson’s absence last season.  Washington was 39-11-6 with Carlson in the lineup (a 123-point pace over a full season, 17-7-2 in his absence (a 114-point pace that still would have won the Presidents Trophy).  But that is not to sell his contributions short.  The Caps were 24-2-3 when he recorded a point, 8-0-0 when he scored a goal.

As a possession player, Carlson has spent much of his six full seasons in the league dancing on either side of 50 percent Corsi-for.  But last season was another instance of adding a solid season to the one he had before.  After posting a Corsi-for at 5-on-5 of 51.26 percent in 2014-2015, Carlson finished at 50.49 percent last season, fifth among seven Caps with at least 250 5-on-5 minutes (numbers from Corsica.hockey).

Only two defensemen in Caps history played more games for the club by the age of 26 than John Carlson (Kevin Hatcher: 613, Scott Stevens: 601).  With 454 regular season games on his resume, he should become the 11th Caps defenseman in franchise history to reach the 500-game mark with the club.  He is also making his way up the franchise list in goals (ninth among defensemen with 53), assists (ninth with 175), points (eighth with 228), power play goals (tied for ninth with 15).  What set Carlson apart last season, though, was his postseason performance.   Going into the playoffs, Carlson had six career goals in 51 games.  He had five in 12 postseason games last spring.  He started the playoffs with 19 career points, then added 12 in 12 games.  Carlson is now tied for fourth in playoff goals by a Capitals defenseman (11, with Al Iafrate) and is tied for fifth in postseason points by a Capitals defenseman (31, with Sergei Gonchar).  He is now tied with Mike Green as the all-time franchise leader in playoff power play goals (6).

More minutes in the playoffs for Carlson was a pretty good indicator of how the Caps did.  Eight games he skated more than 25 minutes, and the Caps were 2-6.  They won all four games in which he skated less than 25 minutes.  But before that, it was a sort of odd year for Carlson, points-wise.  He started the year going 2-8-10, plus-3 in his first seven games, and he was 2-6-8, plus-7 in his last nine games.  In his middle 40 games, though, he was a comparatively quiet 4-17-21, plus-6.  Not bad, certainly, but just a bit…odd, even with his injury.

The Big Question…  Can John Carlson get into the Norris Trophy conversation in 2016-2017?

John Carlson has been inching his way upward into the upper echelon of NHL defensemen since he came into the league in 2010.  What he has not yet done is make a clear case to be included in the conversation of elite NHL defensemen and, by extension, Norris Trophy contenders.  If you look at the finalists and winners in the post-2004-2005 lockout era, the profile of a worthy defenseman is not as clear as one might think.  Overall, the average finalist, on a per-82 game basis, does tend to have top-end offensive skills (17-47-64, plus-19).  Winners do not have a clearly superior offensive profile to other finalists (15-51-66, plus 22 for winners versus 17-45-62, plus-18 for other finalists).  At an individual level, though, there is considerable variation among winners.  Niklas Lidstrom won with 80 points in 2006, but three years later Zdeno Chara won with having scored “only” 50 points.  Duncan Keith won in 2014 with just six goals.  Last year, Drew Doughty won with 51 points.

So where does John Carlson enter this conversation?  Carlson, until last season, played in the shadow of Mike Green (perhaps a shadow that could not have been cast as long, given Green’s injury and performance history in his later years with the Caps).  He is not a flashy player, but he is (save for some bouts of inconsistency) an effective one.  His offensive numbers over the last two seasons, while not at the level of, say, an Erik Karlsson, are not disqualifying, given the history of Norris finalists.  It would not take a lot, especially if the Caps continue to be among the league’s top teams with the exposure that brings, for Carlson to step into the conversation for the Norris Trophy in 2015-2016.

John Carlson has hit almost all his developmental marks faithfully over the last half dozen seasons.  He has taken over for Mike Green as the top offensive defenseman on the club, but he needs to display more consistency in his own end.  The odd part of his offense, though, is that he is not quite yet an elite power play quarterback.  Limited to 56 games last season, his per-82 game power play scoring rate (3-18-21) would not have had him in the top-15 among defensemen and, in fact, would have still trailed Mike Green in Detroit.  Growing his power play numbers could be a chore, given that the power play generally goes through Nicklas Backstrom, although Carlson has improved his ability to feed Alex Ovechkin for one-timers (a skill at which Green was gifted).  His ability to grow this part of his game and improve his defensive consistency would not just improve his Norris Trophy chances, but could very well be the “secret ingredient” to finding playoff success.  And those would be the headlines he and the team would rather inspire.