Tom Wilson and the Nature of the Act: The Broader Problem 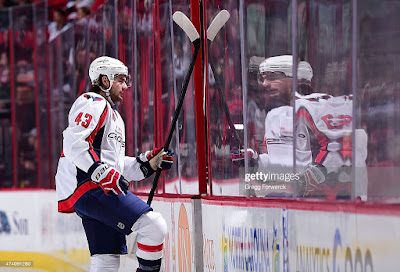 If you are a hockey fan, and you have not heard about the dust-up in New York between the Washington Capitals and New York Rangers on Monday night, and Tom Wilson’s feature role in it, you are a rare breed of fan.  Following a battle in front of the Capitals’ crease in which the Rangers were fighting to stuff the puck past Caps goalie Vitek Vanecek, Tom Wilson found himself tangled up with, in order, Pavel Buchnevich, Ryan Strome, Buchnevich again, and Artemi Panarin after Wilson took exception to Buchnevich’s behavior in the Caps’ crease on the play.

Wilson got in his licks on Buchnevich before Strome entered the fracas and tried to separate Wilson from his teammate.  Nic Dowd came to Wilson’s rescue and pulled Strome off Wilson’s back.  Panarin then literally took a flying leap, jumping on Wilson’s back as Wilson was trying to get at Strome.

Wilson broke free of Panarin’s grip, took hold of Panarin’s jersey (reports of his grabbing Panarin’s hair to get leverage were incorrect), and slammed hm to the ice, getting a few tugs, described as “ragdolling” Panarin, for good measure.

Wilson would be penalized 14 minutes (a double minor for roughing and a ten-minute misconduct) and would be fined $5,000 by the league, but not for his antics with Panarin.  The fine was for his punching Buchnevich while both were on the ice.  He received no supplemental discipline for his engagement with Panarin.

And all this points out what is wrong with the way the Department of Player Safety enforces discipline and metes out punishment.  Just not in the way you would expect.

Oh sure, the hockey media and social media outdid itself ratcheting up the hyperbole in the aftermath of the incident, from the use of comparatively tame descriptions as an “assault,” “dirty,” “Disgusting. Vile. An absolute embarrassment to the National Hockey League…filth,” “death penalty stuff,” But it hardly stopped there.  New York Post columnist and uber-cheerleader for the Rangers, Larry Brooks, described the incident as follows: “This was not only bush-league stuff from this notorious headhunter who has been suspended five times in his NHL career, it was frightening how close his initial body slam of Panarin, on which the Washington winger grabbed a chunk of hair to gain leverage, came to causing calamitous damage. Had Panarin’s head, rather than shoulder, hit the ice full force, the NHL might be presiding over a death.”   The headline to that story shouted, “NHL must ban Tom Wilson for nearly killing Artemi Panarin.”

But perhaps the real problem here is the NHL Department of Player Safety.  The first part of that problem, and arguably the least of them, is the conditional nature of supplemental discipline.  It amounts to “no blood, no foul.”  Two acts of the same nature are more than likely to be assessed different terms of punishment depending on the seriousness of injury to the victim of the act.  The act is the act, and the league has it backwards.  They punish the most injurious of acts severely (in many cases, but not all;  we will get to that), but it does less at the other end, which provides little incentive to players to restrain themselves because serious injuries, as horrific as they are, are comparatively rare.  There is a lot of un- or under-punished mischief going on.

Second, there is the matter of fines.  Many instances of punishment involve the imposition of a $5,000 fine, “the maximum allowable under terms of the collective bargaining agreement.”  While such a sum can be, as has been characterized in Wilson’s case, “a joke (about 0.12 percent of Wilson’s 2020-2021 salary),” it is only somewhat stiffer a punishment for players at the bottom of the compensation ladder, where $5,000 is 7.1 percent of minimum salary.  And the NHLPA has a dog in this fight over a maximum fine.  Unions are, by their nature, protective of compensation (and any levies against it), but players associations have a responsibility to their members to ensure a safe environment, or safer, given the nature of hockey, so that they can maximize that compensation over a brief career.  Higher maximum fines should be on the table.

But the worst part of the DoPS problem is the appearance of arbitrariness with respect to whom it metes out punishment.  At the core of this issue is the notion of “history.”  Tom Wilson has a history.  Other players have a history.  But there it seems unduly difficult to get a player on the history conveyor.  Player X has no history, so the punishment for a first offense is comparatively mild, if it is doled out at all.  Player X has a second incident, but has no history recognized for purposes of issuing sanctions.  And again, and again.  This seems, by appearances, to be how Sidney Crosby has avoided league sanctions for behavior outside the rules for incidents such as this from 2008:

…or this from Tuesday night…

But Crosby’s antics are not what we will be watching today.  This play involving Philadelphia’s Shayne Gostisbehere and Pittsburgh’s Mark Friedman on Tuesday night will…

This play looks a lot like a very similar play from 2010….

Alex Ovechkin was suspended for two games for this hit.  Perhaps it was a product of Campbell’s being injured on the play (broken clavicle and broken rib).  The league offered a convoluted explanation of Ovechkin’s punishment, which noted the consideration given to Campbell’s injury and Ovechkin's "history."  Mark Friedman remained in the game after Gostisbehere’s hit, but it is the kind of hit that can end a player’s season (Campbell missed the last 14 games of the regular season and three playoff games).  Will Gostisbehere be given a pass as a result? As we write this, Gostisbehere is awaiting a hearing with DoPS, suggesting that some punishment is forthcoming.  To what extent will history be mentioned?  We will see.  Gostisbehere has no history of such infractions.

UPDATE: Gostisbehere was suspended for two games, after (in its statement) the DoPS called the shove intentional.  And yes, they did cite Gostisbehere's lack of history. A baby step, if that.  The problem remains.

The league’s Department of Player Safety is a plain mess when it comes to evaluating, fining, and suspending players for these sorts of incidents.  It has been for a long time and under multiple administrations.  It gives too much credence to history and not enough to the nature of the act.  This is not to say repeat offenders should not face an escalating scale of punishment at all, but those without that “history” seem to be treated rather lightly.  The fines need to have more bite.  And the DoPS needs to improve the consistency with which it evaluates and punishes offenders without regard to their status or the consequences of the action in terms of injury.

We are told that “[the league identifies] whether a standalone incident is suspendable before taking into account who the perpetrator was. That means that if the Wilson/Panarin interaction was Panarin throwing down (pick a name) Conor Sheary, would Panarin get suspended for it?”  From the outside, this claim (in an otherwise excellent essay) just does not pass the sniff test.  But in the end, if you are going to throw the book at Tom Wilson, fine, so long as the guy making $750,000 a year without a history is given equivalent punishment for equivalent acts, even if the victim is not injured.  The object of the exercise is to minimize, if not eliminate dangerous actions taken by players, and inconsistency is the enemy of that aim.

Posted by The Peerless at 12:50 PM No comments: