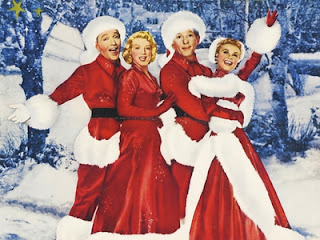 The Washington Capitals took to the ice on Monday night for the fourth game in their five-game home stand, this time hosting the Florida Panthers.  The Caps and Panthers met three times earlier this season, the Caps winning all three by a combined 13-5 margin.  The Panthers came into this game a different team than the one that won the Southeast Division in 2011-2012.  The problem was that so far this season the Panthers were not seeing their way to playing hockey in extra time.  Last season the Panthers earned 32 standings points in games that went past 60 minutes (7-18).  So far this season they had a meager 2-2 record in extra-time games, and the lack of the Bettman Point contributed to their last-place position in the Southeast Division.

The Panthers did not look like a struggling team in the first period, though.  Goalie Jose Theodore was sharp, denying Nicklas Backstrom from point-blank range and fighting off a Mathieu Perreault breakaway in the game’s sixth minute.

The Panthers used Theodore’s early acrobatics as the basis for grabbing momentum as the period wore on to the half-way point, then to take the lead when Tomas Kopecky took advantage of a turnover in the Caps’ end, snapping a loose puck past goalie Michal Neuvirth’s blocker at 9:55 for his seventh goal of the season.

Florida doubled their lead less than four minutes later.  With Nicklas Backstrom in the penalty box serving two minutes for high-sticking, Tomas Fleischmann walked out from the left wing corner.  With the Caps looking for Fleischmann to pass, the ex-Capital kept coming and backhanded the puck high over Neuvirth’s blocker to make the score 2-0 at the 13:31 mark.

Florida could not add to that total in the last six minutes of the period, but the Caps could not make a dent in the lead, either, and the teams went to their locker rooms with the Panthers holding that 2-0 lead and holding an 8-7 edge in shots on goal.

In the first period the Panthers took two minor penalties, but did not suffer any damage as a result.  The third power play for the Caps, though, was the charm.  Shawn Matthias took a cross-checking penalty at the 1:46 mark of the second period, and the Caps made the Panthers pay half a minute later.  Nicklas Backstrom took his time surveying the defense from the right wing wall and took advantage of a hole in the Panther penalty-kill to find Alex Ovechkin on a one timer from the edge of the left wing circle to put the Caps on the board at 2:15.

The goal started a deluge for the Caps.  At 3:22 Mike Ribeiro tied the game when he converted a goal-mouth centering feed from Brooks Laich through Theodore’s pads.  Less than a minute later Ovechkin gave the Caps the lead when he circled out from the left wing circle and used Panther defenseman Ed Jovanovski as a screen to beat Theodore with a wrist shot at 4:22.

Panther coach Kevin Dineen tried to stem the Caps’ momentum by switching out goaltenders, Scott Clemmensen in for Theodore.  Then, the Panthers caught a break when Brooks Laich went off 1:25 after the Ovechkin goal for an elbowing penalty.  But the Panthers not only could not convert the power play chance to tie the game, but allowed the Caps a shorthanded goal.  A loose puck along the boards eluded defenseman Brian Campbell and skittered into the neutral zone.  Jason Chimera beat everyone to the puck and skated in alone on Clemmensen.  Chimera did not choose to deke the goalie, opting for a low wrist shot that handcuffed Clemmensen on the blocker side.  The Caps had their fourth goal in a span of 3:29.

That led to the next bit of entertainment, a bout between Matthias and the Caps’ Troy Brouwer right after the ensuing face-off.  The fight might have blunted the Caps’ momentum, but the damage was done.  The Caps went to the locker room with a 4-2 edge.

Although both teams had good chances to score – Kris Versteeg hitting the crossbar early in the period and Ovechkin being denied a hat trick when he rang the pipe at the nine-minute mark, neither team could manage to score in the third period.  The period – and the game – ended as the period began, with the Caps maintaining their 4-2 lead and winning their third game in four tries on the five-game home stand. 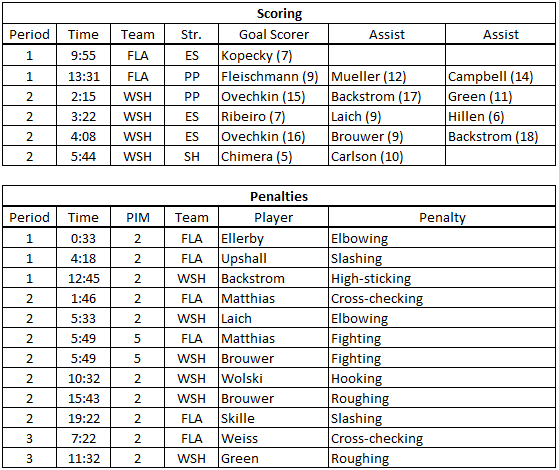