Top Ten Signs Michael Nylander is About to be Traded

Lots of rumors about Nylander going to the Blackhawks. Well, your ol' pal Peerless has the intel on the top ten signs that a deal is imminent...

10. He comes into the locker room with football shoulder pads, announcing, "look, I'm the city of the big shoulders."

9. He asks how "da bearss" are doing against Bridgeport

8. When asked about his favorite SNL sketch, he doesn't miss a beat... "The Super Fans"

7. He sings "Take Me Out to the Ball Game" at the second intermission

5. He starts talking about how much he likes "sassages" with his morning breakfast

4. Someone discovers he has Cristobal Huet on speed dial on his cell phone.

3. He's seen in front of his locker reading the latest Roger Ebert movie review in the Sun Times

2. A teammate overhears him ordering ahead for a Lou Malnati's deep dish

And the number one sign Michael Nylander is about to be traded... 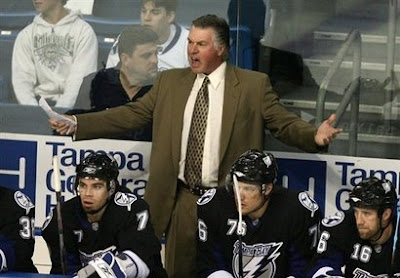 In Wednesday's St. Petersburg Times, Damian Cristodero wrote about former Lightning coach Barry Melrose and his alleged clashes with owners over players' ice time. Fine...that sort of thing is always an interesting read, but we have no idea how true it is.
However, we were taken by a quote later in the article from Melrose on another subject. Cristodero writes...

"Melrose predicted he "quickly" will be back in broadcasting. He also said his coaching days are over. 'It was perfect,' he said. 'My last game (Thursday) was against the Red Wings, the organization I started with. I think God was trying to tell me something.'"

Perfect? Detroit spotted Tampa Bay two goals before storming back with four of their own (three in the third period) to beat Tampa, 4-3.
Sometimes, God doesn't speak in mysterious ways. He just says, "get out!"
Posted by The Peerless at 7:57 AM No comments:

They just never got started.

Three shots in the first, six in the second. The Caps just never put enough early pressure on the Los Angeles Kings to remind them of which team had the 25 points and which team had the 16 points as the teams took the ice. The result is that the Kings got a lead, added to it, then padded it with a couple of late empty netters in beating the Caps, 5-2, last night in Los Angeles.

It was a night when things finally caught up with the Caps – the back-half of a back-to-back (following a game in which the Caps might have been tenderized for the Kings a bit by the Anaheim Ducks); the injuries that had piled up to Alexander Semin, Sergei Fedorov, Shaone Morrisonn (who returned last night), and Mike Green; a long run of success by the top line that finally fell a bit to earth (a combined -11 for the Ovechkin-Backstrom-Kozlov line).

It happens. So here are some observations…

The guys the Caps had to watch closely – Dustin Brown, Drew Doughty, and Patrick O’Sullivan – were the ones who did them in. They were the ones who gave the Kings the lead, broke the ensuing tie, and scored the game-winner. Brown added four hits, all of which might have been at the expense of Alex Ovechkin.

Maybe it’s a scoring thing, but 34 hits credited to the Kings? Only three skaters failed to record one. We can understand that might have been a strategy to employ against a team that had played the previous night against a physical opponent, but…34 hits? John Zeiler (you’ll be forgiven if you didn’t have him on your fantasy team – he was making his season debut last night) was credited with five in just over seven minutes of play. There are linebackers in the NFL who don’t get that many hits in a game.

How odd was the scoring on hits?...Michael Nylander was credited with one. That makes three for the year, if you’re counting.

Speaking of Doughty, we don’t get to see this guy a lot, given that he plays most of his games so late for us east-coasters. But if last night was representative of his play, he gets our quarter-pole nod for Calder Trophy favorite.

It isn’t often that the Caps get out-attempted on shots, especially against a team like the Kings that isn’t especially prolific to begin with. But the Caps were out-attempted, 67-55 last night, another indication that their legs just didn’t make the trip from Anaheim.

The Caps had 12 blocked shots, certainly not a particularly high (or low) number…but Tyler Sloan had six of them.

The Caps took three shots in the first period…all by Alex Ovechkin from an average distance of 49 feet. Second period? Six shots (none from Ovechkin this time) from an average distance of 29 feet. Perhaps not coincidentally, the goal was scored on the shot taken closest to the net (Nicklas Backstrom on a deflection from nine feet). Sure, the Kings came into the game having allowed the fewest shots on goal in the league, but the Caps didn’t do a lot early to keep the Kings from imposing their will, either.
If there was one Cap who did look to be working hard and giving the effort, it was Brooks Laich, who scored a goal, but more importantly was terrific in helping kill off a 5-on-3 power play, getting two blocked shots for his effort.

Unlike most of their recent history, this Kings team has the look of one that could be very good in a couple of years. They skate, work hard, play solid defense, and they have a young core. They are somewhat offensively challenged, but they look as though they have some promise in that area, too. Erik Ensberg wasn’t tested much, especially early, which can be hard on a young goalie in terms of focus. But he played a solid game backstopping the Kings, too. This will be a team to be reckoned with in years to come.

For the Caps, they might have been a bit weary from the contest against the Ducks, and they might have been peeking ahead a bit to the big game against the Sharks on Saturday. Whatever the case, they just didn’t show up with their usual high-tempo game, and the Kings took the initiative. Bruce Boudreau seemed to strike the right tone in describing the effort in his post game comments…

"I just think they were more emotionally into the game than we were at the beginning, and that's the part that's unacceptable. We weren't up to our standards by any stretch of the imagination. And once you let a team get on a roll like that, it's tough to stop them. They were taking away time and space and just working hard. It's that simple. But when you can't get a shot on goal even-strength, that means your team's not working hard enough."

That’s not a blistering attack on his team, but it is a fair statement of what took place. Again, it happens. It just shouldn’t happen again tomorrow night, because if it does…
Posted by The Peerless at 6:53 AM No comments: