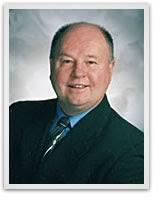 Bruce Boudreau won his 100th game as coach of the Hershey Bears last night -- a 6-4 win over the Albany River Rats in Albany.


And Jakub Klepis -- who started the season without a goal in his first ten games -- broke out in a big way with a hat trick.
Posted by The Peerless at 6:37 PM No comments:

Since the opening of the 1999-2000 season, here are the cumulative records of the 28 teams that played in that season*: 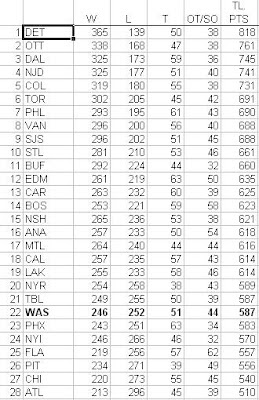 Of those six clubs behind Washington in these rankings, half of them (NY Islanders, Pittsburgh, and Atlanta) have been in the playoffs; Chicago would make the top eight in the Western Conference if the season ended today. It is entirely possible, given the Caps' play so far this year, that three of those teams will pass Washington in this ranking by this season's end.

That’s what it has come to…44 seconds. That’s how much time Caps fans had to cheer in last night’s 5-2 loss to the Tampa Bay Lightning. That was the time in which the Capitals scored their two goals in this contest, the first from Brooks Laich on a deflection and the second on a wrist shot from Alex Ovechkin.

With respect to the first – killing penalties – Jeff Schultz was whistled for a cross checking foul 1:11 into the contest. It took the Lightning 20 seconds to capitalize as Vincent Lecavalier wired a slap shot off the post and behind goaltender Brent Johnson. The Caps, even when they would scramble to a lead later, were looking up at the Lightning for the rest of the night.

- There was the chance off a rebound of an Ovechkin drive that Viktor Kozlov had on his backhand with a yawning net and a sprawled goaltender in front of him…he couldn’t lift the puck over goalie Johan Holmqvist, and Holmqvist smothered it.

- There was Ovechkin circling into the zone with speed and the puck on his stick…after showing “slap shot” he changed his shooting angle and launched a shot over Holmqvist’s shoulder, but the goalie gloved it.

- There was Tomas Fleischmann, providing some effective forechecking, taking the puck away from Shane O’Brien and steering it to Viktor Kozlov circling out from behind the net. Kozlov could not steer the puck in from the top of the crease.

- There was Ovechkin, stealing a bouncing puck at the line just 15 seconds after the Lightning scored their 4th goal late in the second period. In alone on Holmqvist, he could not get the puck over the goalie’s left pad for the morale booster with five seconds left in the period.

- There was Kozlov in the high slot on a power play, taking a feed from the side board and in one motion sweeping a laser at Holmqvist, who sticked it away.

- There was Ovechkin, eight minutes into the third period, in the low left-wing corner sending a crisp pass to Nicklas Backstrom left alone in front. Backstrom fired at Holmqvist, who stopped the first shot and then the backhand by Chris Clark off the rebound.

Finally, there was the back-breaker of a play – another lapse in judgment. Barely 90 seconds after Ovechkin gave the Caps a 2-1 lead, Milan Jurcina collected a loose puck in front of Brent Johnson and circled into the right wing circle in his own zone. Looking to spring someone going the other way, he sent a pass up the middle of the ice. It was a play seen by Caps fans too often in the past by the likes of Sergei Gonchar, and much too often this year by…well, it could be anybody. It ended up on the stick of Jan Hlavac at the Caps’ line. Hlavac skated in and, using Shaone Morrisonn as a screen, snapped the puck far side over Johnson’s right pad. The play effectively ended Jurcina’s night. He skated two more shifts to close the first, then sat for the last 40 minutes without his blades touching the ice.

The line of the night belonged to, as it usually does these days, Alex Ovechkin…

One goal (fourth game in a row with a goal)

Three blocked shots, including two “saves” late when the Lightning were looking for the empty netter

Looking at that ice time – the fourth game in a row in which his ice time has increased – he’ll be spending goalie time out there in a few games. There are mutually reinforcing events happening here…Ovechkin gets more ice time – because he’s the only one producing reliably – the puck goes through him on just about every possession when he is on the ice, he takes most of the shots, and no one else is getting (or perhaps getting themselves) involved in the offense. Take away Ovechkin’s shots on goal last night, and the other 17 skaters had 21 shots on goal. Five of the 12 forwards had no shots on goal, including Chris Clark.

This isn’t selfishness on Ovechkin’s part, by any means. This is what the Caps have been reduced to on offense…Alex Ovechkin and…

If you’re looking for other rays of sunshine in this game, good luck. Viktor Kozlov had all those chances, but failed to convert any of them and finished -3. Mike Green ended up with some of the ice time that Jurcina forfeited and played well…almost 25 minutes, three shots on goal (including an excellent chance not described above), three blocked shots. He was -1, but that was the empty netter at the end. After that…

Of course, they only played 48 games that season.