The Peerless Prognosticator is ON THE AIR!!! -- Game 10: Ducks at Capitals, November 1st

On Tuesday, the Capitals return to the friendly confines of Verizon Center after having dropped both ends of a short road trip to the western provinces of Canada. Meanwhile their opponent – the Anaheim Ducks – are in the midst of a seven-game road trip on which they are currently 1-2-1 after four games. This will be the Ducks’ third city in four nights, having dropped two games in two nights in Nashville and Columbus on Saturday and Sunday.

“And where did the duck go when he had the flu?”
Don’t say it…


“The ducktor!”
Does this go on much longer?


“What goes ‘quick-quick’?”
This is why there is a seven-day waiting period for handguns.

“A duck with hiccups!”
Can we just get to the game?  First, let's take a look at how the Ducks compare with the Caps heading into Tuesday's contest... 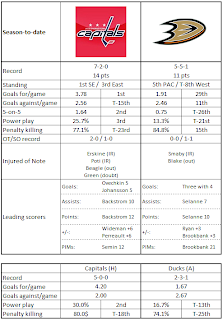 1. Anaheim has scored 21 goals through 11 games. That 1.91 goals/game average ranks the Ducks 29th in the league. But perhaps worse for them is that the Ducks are essentially “Top Line Plus Teemu.” The top line of Ryan Getzlaf, Corey Perry, and Bobby Ryan have four goals apiece. Add the three scored by Selanne, and that is 15 of the 21 overall. No other Duck has more than one, and only two other forwards – Andrew Cogliano and Maxime Macenauer – have as many as one.

3. In 16 man-games in their respective careers against the Caps, the trio of Ryan Getzlaf, Corey Perry, and Bobby Ryan are a combined 8-14-22. Please…pay attention! Oh, and for those of you keeping score, the Caps could have had either Ryan Getzlaf or Corey Perry, both of whom were selected by Anaheim in the 2003 entry draft (19th and 28th overall).

4. Odd Duck Records… Anaheim has 34 hat tricks in team history, but no one has ever had more than three goals in a game…retired defenseman Dmitri Mironov once played for the Caps, but he holds an Anaheim team record against the Caps – five assists in one game (December 12, 1997)…the six goals Anaheim scored in a 7-6 loss to the Caps last February 16th represents the most goals scored by the Ducks in a regulation-time loss.

5. No Anaheim defenseman has a power play goal yet this season. In fact, among the eight defensemen having dressed for games so far, only two have points – Lubomir Visnovsky (0-2-2) and Cam Fowler (0-1-1). They also happen to be the only Duck defensemen averaging more than 1:30 of power play time per game.

2. Among players having taken at least 50 faceoffs this season, only six players have a worse faceoff percentage than Marcus Johansson’s 38.5 percent. As a team the Caps are 27th in the league on draws. In the six years since the lockout coming into this season the Caps finished out of the top-ten in faceoffs only once.

3. Only three teams have less power play ice time than do the Caps, and the Caps have barely half as much time (50:46) as do the league leading Columbus Blue Jackets (101:18). Then again, Columbus has two wins in 12 games and has a power play running at 10.2 percent (29th). Maybe having lots of power play ice time is a product of doing do little with it.

4. One reason the Caps lead the league in offense?... They lead all teams in 5-on-5 goal scoring (2.56/game). That is more than the combined scoring output per game of 16 teams. Only three teams have scored more goals at 5-on-5, and only three teams have allowed fewer at full and even strength.

In his certain to be Hall of Fame career, Teemu Selanne has not scored goals at a faster pace against any team than he has against the Capitals. In 23 career games against Washington, Selanne has 19 goals (a 68-goal pace over 82 games). He has turned into something of a playmaker with seven assists in his last eight games. He has a goal in each of the last four games he appeared in against the Caps. Weekends do not seem to agree with Selanne so far this season. In eight games on Friday through Sunday, he is 0-3-3, minus-5. But he is 3-4-7, plus-2 on Monday through Thursday. It might be worth noting as well that he has two of his three goals in the second half of back-to-back games and his other goal with one day’s rest.

Alexander Semin has two goals in the Caps’ nine games so far, only one in eight games since opening night. Part of the problem is lack of shots. He has one or no shots in four of the eight games, two in two others. Since opening night he is 1-for-16 shooting. If he is going to break out against a team not from the Southeast Division, this could be the team. He has six goals in three career games against the Ducks, including a hat trick in that wild 7-6, come from behind four times win against the Ducks last February 16th. It’s also worth noting that after the Caps had their first two-game losing streak last season, Semin had a hat trick in his next game, three of the four goals in a 4-3 overtime win over Atlanta.

1. No Leavin’ Even. The Caps have outscored the Ducks at even strength, 25-15, and have done it playing in two fewer games. Only three Ducks have more than one even-strength goal for the season (none of them are last year’s league MVP, Corey Perry). The Caps’ 5-on-5 goals scored-to-goals allowed ratio (1.64:1) is more than twice that of the Ducks (0.75:1). If the Caps don’t win this battle, one can’t think they are going to win the game.

3. Don’t be “Wild” about penalty killing. Anaheim has managed two power play goals in a game only once this season. They came at the expense of the Minnesota Wild on October 27th in the Ducks’ last win. Why is this significant? Well, because the Wild is not a very good penalty killing team so far – tied for 23rd in penalty killing going into Monday’s action (77.1 percent). The thing is, though, the team with which they are tied happens to be the Caps.

In the end, the Caps are facing their first adversity of the season. Lest fans forget, though, the Caps lost consecutive games in Games 6 and 7 of the season last year and then went 10-1-1 in their next dozen games. They were pretty good at keeping streaks short. Other than the eight-game horror show last December the Caps had streaks of two or more losses in regulation only three times, and none longer than three. Every team is different, though, and it will be interesting to see how the Caps handle this hurdle.