The Peerless Prognosticator is ON THE AIR!!! -- Game 14: Capitals at Maple Leafs, October 29th

The Washington Capitals wrap up their season-long five-game road trip on Tuesday night with their only visit to Toronto this season to take on the Maple Leafs.  Washington will look to improve on an already successful 3-0-1 record on the road trip, while the Maple Leafs try to take advantage of a home respite between road games in Montreal and Philadelphia.

Mitch Marner came into the NHL the same season as Auston Matthews.  Folks remember that Matthews scored four goals in the first game he played in the NHL.  They might remember that his 120 goals since coming into the league are third-most, trailing only Alex Ovechkin (142) and Nikita Kucherov (123) through Sunday’s games.  What they, and perhaps a fair number of Toronto Maple Leaf fans, might not remember is that Mitch Marner has more points (239 to 218), more power play points (75 to 57), has more credited hits than the sturdier built Matthews (108 to 70) and has missed only five games in his three-plus seasons in the NHL (all in his rookie season) compared to 34 for Matthews.

Not that Marner is a heretofore unknown player whose rise has been unexpected.  He was, after all, the fourth overall pick in the 2015 Entry Draft (the “Connor McDavid/Jack Eichel” draft), and his 239 career points to date trail only McDavid (392) and Eichel (275).  He has 64 multi-point games in his career, tied for 16th most since he came into the league in 2016-2017, and those games mattered to the Leafs, who went 55-6-3 in those games (by way of comparison, Toronto is 39-11-10 in the 60 multi-point games Matthews recorded).  Toronto has won all four multi-point games Marner has so far this season, but it seems he has to perform at this level for the Leafs to be successful.  Toronto is just 2-5-2 in the nine games in which Marner had one or no points.  Marner is 3-3-6, minus-1, in ten career games against the Caps.

Defenseman Jake Muzzin has something no Maple Leaf has enjoyed in more than half a century, a Stanley Cup.  He won the Cup with the Los Angeles Kings in 2013-2014, in what was his second of eight seasons with the Kings.  Muzzin was traded from the Kings to Toronto in January 2019 for Carl Grundstrom, Sean Durzi and a first round pick in the 2019 Entry Draft.  Muzzin, who did not exhibit a particularly noteworthy offensive touch as a defenseman in Los Angeles, posted five goals and 16 points in 30 games with the Leafs to close last season.  He has continued the better than half-point per game pace this season with three goals and nine points in 13 games to date.  Odd Muzzin fact… in each of the three seasons preceding this one he finished 11th in Norris Trophy voting.  He is tied for the team lead among defensemen in goals (three, with Morgan Rielly) and is second in points (nine) and average ice time (23:11).  Muzzin is 1-4-5, even, in 12 career games against Washington. 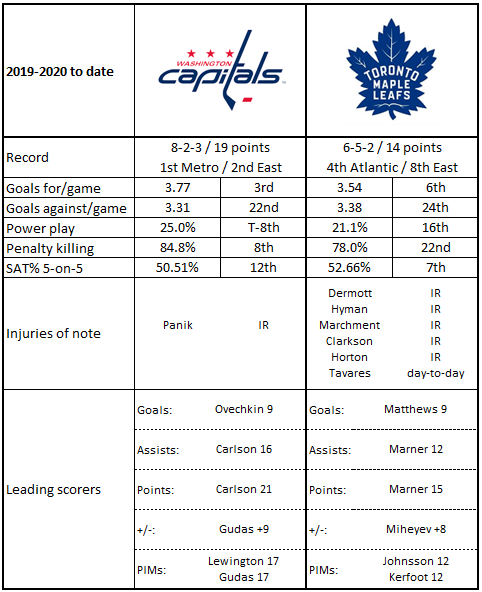 1.  No defenseman for the Leafs has a power play goal this season.  The eight defensemen to have dressed have a total of five points (all assists), four of them by Morgan Rielly.

2.  Toronto has dressed 14 forwards this season.  All of them have recorded at least one point; three of them have ten or more: Mitch Marner (15), Auston Matthews (13) and Ilya Mikheyev (10).

5.  Toronto has 26 penalties taken on home ice this season, all of them minor penalties.

1.  Washington has been charged with 30 penalties on the road so far this season, all of them minors.

3.  Washington leads all teams in shots blocked in road games (133) and are second in credited hits (170, trailing only Anaheim with 191).

4.  The Caps have spent more time shorthanded on the road (53:22) than any other team in the league.

5.  Washington is under 50 percent in shot attempts-for percentage at 5-on-5 in each of their last six road games (44.13 overall).

Of the 24 rookies in the league having dressed for ten or more games, none are older than Toronto winger Ilya Mikheyev, who turned 25 on October 10th.  The Russian native made his way through his country’s development program, eventually ending up with Avangard Omsk in the KHL in 2014-2015, where he played for five seasons.  After recording 23 goals and 45 points in 62 games with Avangard last season and helping his team reach the Gagarin Cup final, he signed a one-year deal with the Maple Leafs last May paying him $925,000 this season.  Mikheyev is off to a fast start in his rookie class, tied for the lead in points through Sunday’s games (ten, with Colorado’s Cale Makar and Buffalo’s Victor Olofsson), while his four goals trail only Olofsson (six).  His plus-8 leads all rookies, as do his shots on goal (32), and his 15:55 in ice time per game is second among rookie forwards (Olofsson: 17:26).  One of those goals came in Toronto’s 4-3 loss to the Caps in the teams’ meeting earlier this season, the only time he has faced Washington.

Players, even those with the pedigree of Nicklas Backstrom, have slumps from time to time, and Backstrom might be in the midst of one.  After going without a point in the season opener in St. Louis, Backstrom went 2-6-8 over his next eight games, the point per game pace being roughly equivalent with his career pace (0.97 points per game).  However, on the four games of the five-game road trip, Backstrom has a lone assist and is minus-1 while averaging 19:25 in ice time per game.  His 2-7-9, minus-4 start through 13 games is a considerable departure from his start last season (3-13-16, plus-4 through 13 games), although he did hit a rough patch the previous year when, after going 3-9-12, plus-1 over his first eight games, he went seven straight games without a point and was minus-2, and would suffer a 21-game stretch without a goal from Games 7 through 27.  Nevertheless, Backstrom finished last season with 74 points and had 71 in the season before that.  Odd Backstrom fact… the Caps have won all five games in which he skated less than 20 minutes so far (four of them were on the road, the other was against Toronto in Washington).  In 40 career games against the Maple Leafs, Backstrom is 9-33-42, plus-17.

This game pits two of the top six scoring offenses against one another.  It also pits two of the ten worst scoring defenses against one another.  Signs point to a high-scoring affair, although there are the two goalies playing well, Braden Holtby with a .918 save percentage over his last four games and Frederik Andersen with a .924 save percentage in his last five games.  This being played in Toronto, where the Maple Leafs have been held under three goals only once in eight games, and the Caps having scored five goals in four of their last six road games, we think “high scoring,” even with Toronto captain John Tavares nursing a fractured finger, will win out.