The Peerless Prognosticator is ON THE AIR!!! -- Game 41: Capitals at Sabres, April 9

Over a 21-game stretch from February 16th through March 28th, the Caps were next to unbeatable.  Their 17-3-1 record over that span was, far and away, the league’s best, four standings points better than four other teams and with a points percentage of .833, almost 100 percentage points clear of the next best teams (Colorado, Minnesota, and the New York Islanders, all at .738).  They were top-five in scoring offense (3.38 goals per game/fourth), to-five in scoring defense (2.29, tied for second with Minnesota and the Islanders.  Only three teams allowed fewer shots on goal per game than the 26.6 allowed by the Caps.  They even won more than half of their faceoffs (50.4 percent).

And then, things came to a screeching halt.

Since the Caps lost to the Rangers in New York on March 30th, the Caps are 2-4-0.  Only four teams have a worse points percentage over that span than the Caps (.333), they are tied for 19th in scoring offense (.250 goals per game), 28th in scoring defense (3.83 goals allowed per game), they allowed almost six more shots per game (32.2), they can’t hold leads (1-2-0 when scoring first, 1-1-0 when leading after two periods), and they struggle with possession (46.6 percent shot attempts-for at 5-on-5/22nd).  They have been outscored, 10-2, in third periods.  No team has allowed more third period goals in that span, and their minus-8 goal differential is worst in the league.

One might thing that the problems are a product of a schedule over that period heavily weighted to road games, five of the six in all to a 2-3-0 record, but this club was 7-1-0 on the road during their 17-3-1 run preceding this slump.  Perhaps it was strength of schedule, the Caps going 0-3-0 in the three games against playoff-eligible teams (two losses to the Islanders, one to Boston), but the Caps were 4-1-1 against playoff eligible in their 17-3-1 run.

Which brings us to Friday night and a visit to Buffalo to face the Sabres.  If the Caps cannot get well, or at least better, against this team, the trading deadline and whatever deals the Caps make might be irrelevant.  The Caps are 5-0-1 against the Sabres this season, outscoring them by almost two full goals per game (3.83 for/2.00 against).  Their power play is 4-for-9 in the six games.  They have scored first in five of the six games (4-0-1), and they are undefeated in the four games in which they took a lead into the third period.  They haven’t trailed the Sabres at any intermission in the six games and have allowed only two first period goals in the six games.  The Caps have out-scored the Sabres, 17-6, at 5-on-5. 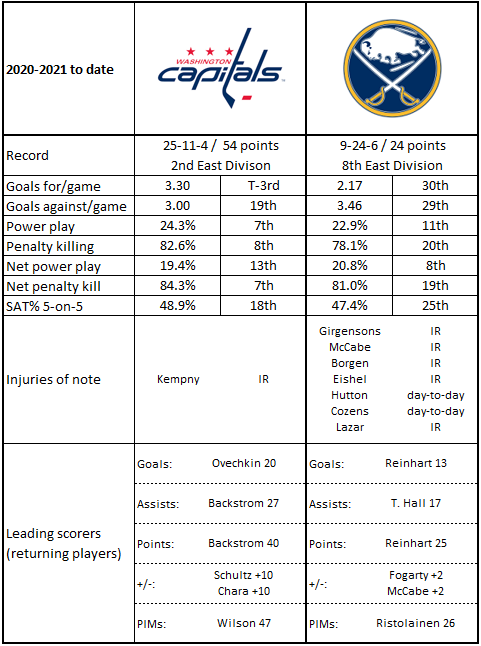 1.  Don’t give up on Buffalo.  After going 0-15-3 from February 25th through March 29th, the Sabres are 3-1-1, although all five of those games were played against team out of the playoff mix (New Jersey and the Rangers twice, and Philadelphia).  That is tied with the Boston Bruins for ninth-best record in the league over that span (both 3-1-1/.700 points percentage).

2.  Buffalo outscored opponents over that five-game run, 18-15.  The 18 goals scored is tied for second in the league over that period.

3.  Your leading goal scorers over those five games for the Sabres?  Brandon Montour and Casey Mittelstadt, with three apiece.  Mittelstadt and Kyle Okposo lead in points with five apiece.

4.  Eighteen of the 20 skaters to dress for the Sabres in their 3-1-1 run have points.  Matt Irwin and Tobias Rieder are the only ones shut out.

5.  The shots on goal leader in those five games is Tage Thompson.  He has had an impact in limited duty – 3-3-6, minus-2, with 47 shots on goal in 21 games.  Four of those six points have come over his last six games.

1.  The Caps have goals from nine of 20 skaters in their recent 2-4-0 slide, but it is who does not have one that jumps out – Nicklas Backstrom, Tom Wilson, Lars Eller, Jakub Vrana.  That quartet accounts for 37 of the 132 goals scored by the Caps this season (28.0 percent).

2.  Wilson’ drought is of special note.  Over those six games without a goal, he is tied for the team lead in shots on goal with Alex Ovechkin.

3.  John Carlson has maintained a semblance of productivity, going 3-36 over the six games, leading the team in points.  T.J. Oshie leads the team in goals over that span with four.

4.  No Capital over those six games is a “plus” player.  Daniel Carr is the only one as high as “even,” and that is with only one game played.

5.  Jakub Vrana will be looking to end a 13-game streak without a goal, if he dresses for this contest (he dressed for only four of the six games in this slump).

There is a “what if” aspect to the career of Sabres’ forward Kyle Okposo, mostly a matter of “what would career have looked like without all the injuries?”  And not just a game here or there, but chunks of time.  Six times in his career he was shelved for ten or more games due to injury, from the 13 games he missed in 2008 to an arm injury to ten games for a concussion in 2019.  In all, Okposo has missed 147 games to illness or injury in his 14-year career.  Even with the injuries, Okposo has been a productive, 20-30-50 level of scoring type of player in five seasons with the Sabres and nine with the New York Islanders.  Even with the gaps in his resume due to injuries, Okposo ranks highly among his cohort in the 2006 Entry Draft, an draft at the top of the board that included Jordan Stall, Jonathan Toews, Nicklas Backstrom, and Phil Kessel as the forwards picked ahead of him (Okposo was taken seventh overall by the Islanders).  He ranks 12th in games played (831), tenth in goals (198), eighth in assists (320), and ninth in points (518).  On the other hand, he and Kessel are tied for the worst plus-minus rating in that draft class (minus-116).

His production has dropped in his five years in Buffalo, although a 16-25-41 scoring line is still respectable on an 82-game basis.  For much of this season, however, the mileage, not to mention the difficult season the Sabres have had, seemed to have taken its toll. Okposo is just 2-10-12, minus-3, in 31 games this season.  On the other hand, he is 2-7-9, plus-3, in his last nine games, posting at least one point in eight of those games.  Okposo is 0-0-0, even, in three games against the Caps this season and 11-11-22, even, in 38 career games against Washington.

It has been a difficult season for Lars Eller. He has missed 11 games to injury and another to attend to a family matter.  And on the ice, his season divides into two different sets of games.  Over his first 19 games this season, Eller was 5-7-12, and the Caps were 8-2-1 in the games in which he had at least one point.  He won 52.9 percent of his faceoffs and had a personal on-ice shot attempts-for percentage at 5-on-5 of 51.5 percent.  He averaged almost a minute of power play ice time per game (0:59) and 2:19 in penalty killing ice time.  He shot 15.6 percent on 32 shots.

Eller is perhaps the most versatile forward on the roster.  A the top of his game, he is effective in all three zones, and he can be slotted in any of the top three center positions.  Getting him back on his game as a player who complements every strength the Caps can bring to the ice, will be essential to dig themselves out of their recent doldrums.  Eller is 0-2-, even, in five games against the Sabres this season and 4-2-6, minus-5, in 19 career games against Buffalo.

When one thinks of a “statement” game, one usually thinks of a contest against a formidable opponent that can be used as a benchmark to be used to gauge a team’s strength.  But this might be a “statement” game for the Caps, won in which they can’t win, in a matter of speaking.  Win the game, and it’s “but it was Buffalo,” a team long departed from postseason competition for this season.  Lose, though, and it spells trouble.  It is one thing to go 2-3-0 on the road, even for a team playing well.  Not good, but not unusual or unexpected.  Losing to Buffalo, even on the road, could be interpreted fairly as the Caps having underlying problems that no deadline deal will fix.  This is not a “must win” game for the Caps, who are in no significant jeopardy of missing the playoffs.  It is, however, a “better win” game.  The Caps had better win, or Capitals Nation will be very uneasy about this teams’ prospects.

Posted by The Peerless at 11:43 AM No comments: