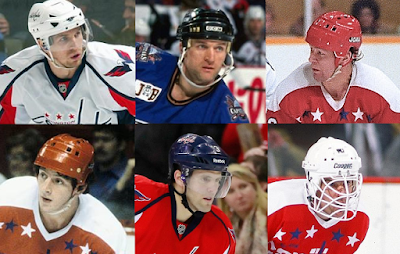 As we approach the home stretch in looking back on the “All-Alphabet Team” we originally published in 2014, we move on to “All-Team P.”  Back in 2014, that team looked like this:

This is a bit of an odd team.  It lacks top-end offensive talent, but it is a surprisingly solid group.  The forwards might be thought of more as second/third liners than having a true top line player.  Michal Pivonka and Jean Pronovost each averaged more than 50 points per 82 games in their respective stays with the Caps (60 per 82 games for Pivonka, 56 for Pronovost).  On the blue line, Robert Picard was also a 50-plus point per 82-game player (56), and Tom Poti was, given the comparatively offensive-starved era in which he played for the Caps, a solid contributor.  Only Matt Pettinger among the skaters might be thought of as less than a scoring force, being more of an energy player, but who grew into a more productive offensive player, albeit briefly (20 goals in 2005-2006 and 16 goals in 2006-2007) before slipping back.

What is lacking on this squad, perhaps more a reflection of the teams on which they played overall, is the lack of playoff experience.  The five skaters combined for 122 postseason games of experience, Pivonka having 95 of them and Poti holding the other 27.

If you are thinking about replacements for All-Team P since the team was published, there is not much from which to pick.  Since 2014-2015, only two skaters have dressed for the Caps whose last names start with the letter “P” – forwards Richard Panik and Anthony Peluso.  Peluso skated a total of 4:39 over two games as a Capital. He will not be getting a sweater for this team.  As for Panik, his nine goals and 22 points in 59 games in his first season as a Capital (he signed as a free agent with the Caps last July), his candidacy is a bit harder to dismiss.  He might be considered as a replacement for Pronovost, but less than a full season is not enough to go on to make that move.  We would keep Pronovost at the right wing spot.

Pete Peeters was the pick in goal in 2014.  Peeters came to Washington after spending eight seasons in Philadelphia and Boston.  His three years in Washington was, if anything, a testament to consistency.  In those eight seasons before arriving in DC, Peeters posted a 3.07 goals against average and a .885 save percentage.  In four seasons with the Caps, Peeters had a 3.06 GAA and a .887 save percentage.  His postseason history with the Caps left something be desired with a 15-15 win-loss record, but he was consistent in stopping the puck here, too, with a.888 save percentage in 30 postseason games with the Caps.

If replacements are to be considered for Peeters, there is but one to be found since the All-Team P was published in 2014.  Oddly enough, it would be another “Peters,” this one being Justin Peters.  The difference between the two is the missing “e” for Justin Peters, which might stand for “effectiveness.”  While he had a 4-3-0, 1.67, .938 record with two shutouts in seven career games against the Caps, he was just 3-6-1, 3.25, .881 in 12 games wearing a Capitals sweater.  He will not be getting a sweater for All-Team P, either.

All-Team P remains intact, and while it is a more competent offensive team than one might think when first looking at the roster, it does not look like a team that is going to raise its level in crunch time to provide a needed elite level of performance.  Better than most teams, but not in the top echelon.
Posted by The Peerless at 3:00 PM No comments: