The Peerless Prognosticator is ON THE AIR!!! -- Game 39: Capitals at Bruins, January 5th

The holidays are behind us, and that means the National Hockey League is about to embark on the long slog that is the January-February portion of the season.  It is a time that tests a team’s discipline and focus, and for the Washington Capitals it begins with a visit to Boston to take on the Bruins in a battle of high-powered offenses.

Washington enters the contest with the league’s second best scoring offense and looking to get back on a winning path after losing consecutive games to close the old year and ring in the new.  Boston has the league’s third best scoring offense and will be looking to get the bad taste out of its mouth from a 5-1 pasting by the Montreal Canadiens in the Winter Classic played outdoors in Foxboro on New Year’s Day.

Washington had a fine December, posting an 11-1-1 record before dropping its final game of the month, to the Carolina Hurricanes (4-2), and before starting January with a Gimmick loss to the Columbus Blue Jackets (5-4).  For Boston, the schedule since December 1st has been a roller coaster.  After closing November with five straight wins, the Bruins are 7-5-3 since, including regulation losses in four of their last five games.  All four of those losses were by multi-goal margins.

The scoring over the last five games has been as unbalanced among players as it has been unevenly distributed across the games themselves.  Only four players recorded goals in this 1-4-0 run for the Bruins, led by Matt Beleskey with four.  Those four goals doubled his total for the season and offered the first glimpse of the sort of player the Bruins might have expected when they signed him to a five-year/$19 million deal last July after he recorded 22 goals in 65 games for the Anaheim Ducks in 2014-2015.  Beleskey does not have a point and is a minus-3 in seven career games against Washington.

Patrice Bergeron and Jimmy Hayes are next in line in goal scoring over the last five games with three apiece.  They came upon them in somewhat different ways.  Bergeron scored the first of his three goals to give the Bruins a 2-1 first period lead in their game against the Buffalo Sabres on December 26th.  It was a lead that the Bruins could not hold, losing the game, 6-3.  Bergeron scored a pair of goals, including the game-winner, in Boston’s 7-3 win over Ottawa on December 29th.   Bergeron is 8-23-31, minus-5, in 36 career game against the Caps

Jimmy Hayes scored all three of his goals in this five-game stretch in that 7-3 win over Ottawa.  The hat trick was his first multi-goal game of the year and the first hat trick in his 202-game career to that point.  It interrupted quite a dry spell he was enduing.  Before that three-goal outburst, Hayes had one goal in his previous 21 games.  Hayes has a goal in six career games against the Caps. 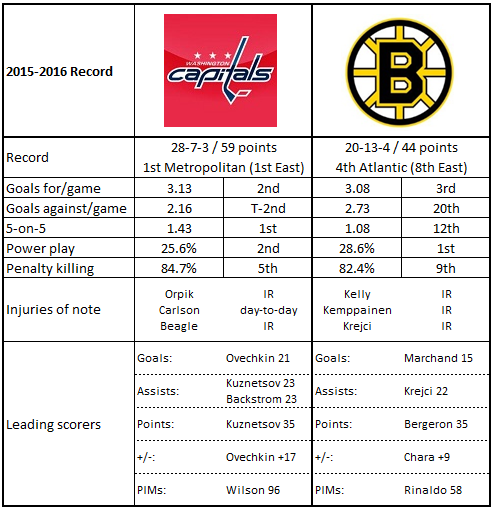 1.  Another note on Patrice Bergeron.  He is 50 percent or better on faceoffs in 31 of the 37 games he has played this season.  Only three times this season has he won fewer than ten draws in a game.  Oddly enough, among players taking at least 250 draws this season he does not rank in the top ten in winning percentage.  Bergeron is 13th at 56.6 percent.

2.  Boston has already employed ten defensemen this season.  No team has used more (Edmonton and Tampa Bay also have dressed ten defensemen).  Nine of the ten Bruin defensemen to dress have points.  Only Matt Irwin, who dressed for only two games, does not have a point.

3.  Boston is one of two teams in the league to have scored 35 or more goals in each of the three periods in regulation this season (Dallas is the other).

5.  Caps fans are acquainted with the matter of their team having a winning record despite some iffy possession numbers.  The same holds true for the Bruins.  Despite a 20-13-4 record, Boston is 18th in Corsi-for at 5-on-5 overall (49.2 percent).  It does not get much better in score-adjusted (49.6/17th) or close score situations (49.8/15th; numbers from war-on-ice.com).

1.  The Capitals are 10-0-0 in games in which Alex Ovechkin recorded an assist this season.  They are 10-0-1 when Marcus Johansson records an assist.  Helping is a good thing.

3.  Washington has a plus-16 goal differential in the third periods of games this season, second in the league. They and the Dallas Stars (plus-24) are the only teams better than plus-10.

4.  Despite losing consecutive games by one-goal margins coming into this game with Boston, the Caps lead the league in winning percentage in one-goal games (.688/11-2-3).

Over the last five seasons, including this one, no Capital player has more points against Boston in regular season games than Nicklas Backstrom.  The odd thing about it is, all of his 11 points have come via assists.  He has not had a goal against the Bruins in a regular season game since April 5, 2010, a game in which he figured in all the scoring (1-2-3) in a 3-2 win.  It has been 15 games without a goal against the Bruins, but he has been effective, nevertheless.  Those 11 assists have come over his last 10 games against Boston.  He is 4-24-28, plus-8, in 26 career games against the Bruins.

After losses to a pair of struggling teams in their last two outings, the Caps move up in weight class in competition as they head to Boston.  The Bruins might be missing their top goal-scorer in Brad Marchand, but it is still a formidable offense with which the Caps will have to contend.  What is more, the Bruins have special teams almost as formidable as the Caps.  Both teams are top-ten in both power play and penalty killing.  The fault line on which this game could be settled is the 5-on-5 play and whether the Caps’ league best goals-for/goals-against ratio (1.43:1) prevails over their iffy possession numbers overall.