The Peerless Prognosticator is ON THE AIR!!! -- Game 67: Lightning at Capitals, March 8th

1a . having lost hope (a desperate spirit crying for relief)
b. giving no ground for hope (the outlook was desperate)

2a. moved by despair (victims made desperate by abuse)
b. involving or employing extreme measures in an attempt to escape defeat or frustration (made a desperate leap for the rope)

That is where the Washington Capitals find themselves as they prepare to host the Tampa Bay Lightning in the last game of a five-game home stand. It has been the home stand from hell, one in which the Caps have managed only three standings points earned so far from eight available. Those five points left on the table are the difference between being first in the Southeast Division and third in the Eastern Conference, and ninth place in the conference, out of playoff eligibility.

They can salvage a .500 mark in the home stand if they can get past the Lightning, a team that has roared to life after it seemed at the trading deadline as if it was making plans for next season. Well, maybe not “roared” back to life, but certainly they have dragged themselves back into the playoff conversation upon winning four of their last five games.

But let’s look at their last six games. The first and last contests that bracket this group were disasters for the Lightning, an 8-1 loss to Pittsburgh and a 7-3 loss to Ottawa. In those games the Lightning’s problems were on vivid display, primarily poor goaltending (13 goals on 67 shots, a .806 save percentage) and a propensity to give up early goals (six in the first period of two games combined, adding to their league worst total of 74 goals that they have allowed through games of March 6th).

But then there are those four games in the middle of the six-game set. All of them one-goal wins, two of them in overtime, less awful goaltending (83 saves on 93 shots; .893), and Steven Stamkos going 4-3-7, plus-3 in the four games (he was 1-0-1, minus-4 in the two blowout losses). Here is where the teams stand against one another on the numbers: 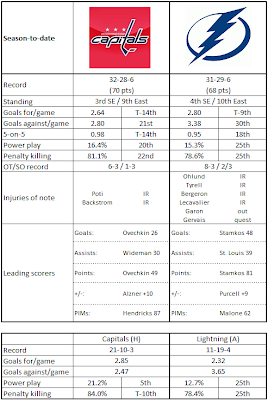 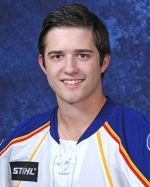 1. Who is the best goaltender in the Lightning organization? One might make an argument for a goalie with a record of 27-11-0, a 2.34 goals-against average, a .907 save percentage, and four shutouts. No, he doesn’t play for the parent club. He is Dustin Tokarski, late of the Norfolk Admirals of the AHL, but who has been called into service with Mathieu Garon out for 3-4 weeks with a groin injury. If Tokarski gets the call against the Caps, it will not be his NHL debut. He appeared in two games in the 2009-2010 season, getting mop-up duty in each one (a 5-2 loss to Florida and an 8-2 loss to the New York Rangers, the former a game won by Caps goalie Tomas Vokoun). He does not have a decision and has a 4.09 GAA and .813 save percentage to go along with his total of 44 minutes of playing time.

2. Those last six games are the Tampa Bay season in microcosm. Four one-goal wins, two blowout losses. For the season, the Lightning lead the league in one-goal wins (21) and winning percentage (.700). The also happen to be tied for the league lead in losses by three or more goals (16) and have the fifth worst winning percentage in games decided by three or more goals (.333).

4. Only one team in the NHL has carried fewer leads into the second intermission this season than the Lightning (22 times) – Washington (19).

1. Washington is supposed to be something of a defense-first team, while Tampa is perceived as being among the leakier teams in the league on defense. How many times have the Caps allowed five or more goals? Fifteen, same as Tampa Bay. On the other hand, only five teams have more shutouts than do the Caps and their goaltenders.

2. Odd number: 3. The number of penalty shot goals scored by the Caps this season, most in the league.

4. If Michal Neuvirth gets the call, it will be his 100th appearance in the NHL, tying him with…wait for it…Semyon Varlamov (until or unless Varlamov then appears in tonight’s Avalanche game against Nashville). He would be the tenth goaltender in Caps history to reach that mark of games played and would be four behind Jose Theodore for ninth place. If you’re curious, he would still be 611 games behind Olaf Kolzig for first place.

5. We finally have a new team leader in assists. Twenty-eight games after Nicklas Backstrom left the lineup due to injury, Dennis Wideman passed him with an assist – his 30th – in the 4-3 overtime loss to Carolina on Tuesday.

If you look up Brett Clark at NHL.com, you will see a picture of a what looks to be a truly miserable player. He might have good cause. Among 285 defensemen to have dressed for games this season, only the Islanders’ Milan Jurcina has a worse plus-minus than Clark’s minus-24. He’s is dead last in road plus-minus at minus-18, one better than teammate Eric Brewer. But before you get too confident about the Caps’ chances to score with Clark on the ice, he is “even” against Southeast Division opponents this season. More to the point, he saves his best, as it were, for the Caps, against whom he is a plus-2 in four games this season. Figures.

Steven Stamkos comes into this game with goals in each of his last four games (5-1-6) and points in nine of his last ten contests (11-8-19). Since December 12th, he has 32 goals in 37 games (a 71-goal pace), nine of them game winners (Tampa Bay has only 19 total wins in that span). Meanwhile, only five defensemen have been on the ice for more goals against (total) than John Carlson. Karl Alzner is tied for 37th highest number of total goals against on ice. You would have to think that pair is going to see a lot of Stamkos. If they can keep from adding from their goals scored against totals, it will be a good night for the Caps.

1. Leave the box empty. Tampa Bay is 9-for-36 (25.0 percent) on the power play in their last ten games. They have only 24 total goals in those ten games. Keep from taking too many penalties, and Tampa’s offense shrinks quite a bit.

2. No kicks on this Route 66. Martin St. Louis has faced the Caps in 66 games in his career. He also happens to have 66 career points (23-43-66). He is the classic version of a Cap Killer (see: 2003 playoffs). And he does it in a variety of ways…four career power play goals, three shorties, four game-winners. You are not going to line him up to get a clean hit on him; he’s too smart and too slick for that. So you have to be aware of him…constantly. Like, start now. Find out what room he’s in at the hotel. Send Hamrlik over there to keep an eye on him.

3. Get ‘em early. As noted above, Tampa Bay has a propensity for giving up early goals – most first period goals allowed in the league. And on top of that, teams have been scoring without the benefit of a lot of shots. In their last six games opponents have scored a total of 25 goals on only 162 shots (27.0/game). A 15.4 percent shooting percentage? Shoot early and often, guys, and this game might be over early.

In the end, if the Caps lose this game, the line between hope and delusion becomes a bit clearer. The Caps would have 15 games left, nine of them on the road, and seven of those against teams ahead of them in the standings, including games at Winnipeg (where the Jets refuse to lose), at Chicago, at Detroit (four losses in regulation at home all season), at Philadelphia, at the Rangers, and twice in Boston. That does not make this a “must win” game (those are reserved for elimination games), but at this point it is a “can’t lose” game.