You heard right, Caps fans.  The Pittsburgh Penguins have been eliminated from Stanley Cup contention.  Oh, they will probably make the playoffs, and they might even win a round or two.  But here is your Friday Fun Fact to impress at the water cooler...

Four games in, and a sizable number of Caps fans (well, those who post on message boards, tweet, and otherwise practice the keyboard arts) seem a little too inclined to kvetch about the lack of style points the Caps are earning while they were in the process of earning six standings points out of a possible eight in their first four games.

As of this afternoon, the Caps…

OK, things aren’t entirely hunky-dory. The power play is off the rails (19th), which at the moment is probably the single biggest concern. But all in all, the team stats do not look bad. But there is another way to look at this. You would not be far gone to think that as the “Young Guns” go, so go the Caps. If you look at their raw numbers, they might not impress, at least by their standards. As a group they are 6-8-14, plus-10. But individually, are they really off to that “slow” a start? 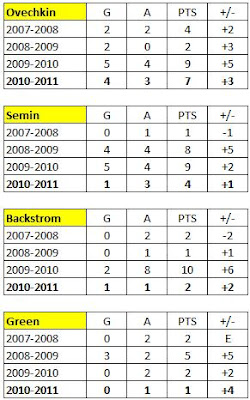 And even with respect to special teams, there is a silver lining. Yes, the Caps are struggling on the power play, but their penalty kill is 15-for-15, a mark that tops any of the previous three years. If you take their power play success rate and add it to the penalty kill success rate, we have the the “ecstasy index.” A rating of more than 100.0 is the object of the exercise. And with that in mind, the Caps have a better “EI” than in any of the previous three years. And, in terms of “plus/minus” the Caps are a plus-2 on special teams so far (two goals scored on the power play, none allowed on the penalty kill), their best mark in any of the last four seasons.

The special teams have contributed, albeit in perhaps a small way, to the Caps having the second-lowest goals-allowed per game through four games (2.25/game) of any of the past four years. And, they have their best per-game goal differential (1.25 goals).

You could argue (with merit) that this is largely a product of the Caps pasting the Devils last Saturday night. But then again, what all this means, too, is that through four games the Caps have as good a record through four games as in any of the past three seasons (3-1-0).

So take a breath, because in the end it is about wins and losses. This isn’t the Miss Universe pageant or the Bowl Championship Series. Style points do not count.
Posted by The Peerless at 5:41 PM 2 comments:

Skill won out in the end… barely. The Washington Capitals rode a late Nicklas Backstrom skate deflection of an Alex Ovechkin shot on a power play to escape with a 2-1 win over the New York islanders tonight at Verizon Center.

They sure didn’t do it the easy way. But give some credit to the Islanders, too. A team missing three of its top scorers in John Tavares, Mark Streit, and Kyle Okposo; missing its ice time leading defenseman in James Wisnewski; and goaltender Dwayne Roloson putting on the mask for the first time this season; the Islanders came within 3:49 of earning at least one standings point on the road. And given the way they were giving the Caps fits trying to establish any sort of offensive rhythm, a second point in the extra session was certainly possible.

But Ovechkin and Backstrom, who teamed up on the Caps’ first score in the second period to tie the game, did it one more time to seal the deal. It was the product of a rather silly roughing penalty that Blake Comeau took behind the play, Tyler Sloan drawing the two minutes for Comeau. Twenty-six seconds later, Alex Ovechkin took a feed from John Carlson and from the top of the zone ripped a shot that skipped off Nicklas Backstrom’s skate and past Roloson.

Until then the game was in doubt, the Caps held together by the goaltending stylings of Michal Neuvirth, given the nod in goal for the fourth straight game. The Islanders got a goal early of the “no chance for the goalie” variety when Nino Niederreiter converted a behind the net feed from Doug Weight that was behind Neuvirth before the goalie could react. It was a case of a blown coverage in front (John Carlson late to cover Niederreiter, John Erskine not in the picture frame), Niederreiter having nothing but clear ice to set up 20 feet from the net at the edge of the right wing circle and pot his first NHL goal 3:14 into the game.

One might be forgiven for wondering if the Caps would ever tie the game, their getting only five shots in the first period. But they came out with a bit more energy to start the second period, getting four shots in the first 150 seconds. The momentum was stalled when Eric Fehr took a penalty for interfering with Zenon Konopka 2:49 in. The teams exchanged unsuccessful power plays, and play settled into a snooze fest of skating around in the neutral zone.

Then Radek Martinek made a dumb play for a veteran. As he was skating to the red line he tried to thread a backhand pass up the right wing, but Nicklas Backstrom was in the way. Backstrom intercepted the puck and found Alex Ovechkin going the other way down the left side. Ovechkin forced Mark Eaton to back off, and Ovechkin (as he has done on countless occasions to countless other defensemen) used Eaton as a screen. He snapped the puck through Eaton’s legs and past goalie Dwayne Roloson on the far side to tie the game less than two minutes before the second intermission.

After that, it was just a matter of waiting to see if the Islanders could get a bounce and grind one out, or if the Caps would have one moment where their superior skill would shine through. Fortunately for the Caps, it was the latter.

-- Zenon Konopka, whose hands are known for something else entirely for the Islanders, managed to use them deftly to the tune of 16 faceoff wins in 20 draws.

-- It would not be surprising to Caps fans to see that former Caps defenseman Milan Jurcina led the Islanders in hits (four). It would surprise them to know that only Blake Comeau had more shots on goal than the three he had. Last year, he had only four such games all season.

-- John Erskine had five blocked shots tonight. That’s good. He also was on the ice for the Islanders’ goal. That’s bad – he’s been on the ice for four of the nine goals scored against the Caps so far through four games.

-- David Steckel and Boyd Gordon are out there largely because they can win draws. Going 4-for-9 and 3-for-10, respectively, isn’t part of that game plan, especially a combined four up and seven down in the defensive end.

-- But again, there was Nicklas Backstrom leading the Caps in that category (12 to the good, eight to the bad) – that’s 54.3 percent wins so far through four games.

-- From the “maybe they’re growing up a little” file… a young team could get frustrated by the sort of game the Islanders play. Playing them is like playing in oatmeal. You’ll expend a lot of effort to gain about ten feet of ice. Get frustrated enough, and they can capitalize on errors. But the Caps got down into the mealy mush with them in this respect – 24 shots on goal allowed, 22 shots blocked. The defense had 18 of them.

-- How does a team go 15-for-15 on the penalty kill to open the season? Here is a hint… on three power plays the Islanders managed one shot on goal, a harmless 56-footer by defenseman Andrew MacDonald.

-- D.J. King… first shift, first fight. Five minutes in the box, 4:42 of ice time. What? You thought he was signed to provide secondary scoring?

-- Beats the crap out of Trevor Gillies, though. Gillies (King’s dance partner) had five minutes in penalty time, 1:16 of ice time (three shifts, none after the 8:07 mark of the second period).

-- An interesting stat… Karl Alzner skated a total of 8:33 in the first two periods. He skated more than seven minutes in the third period. Part of that might have been Mike Green getting only 5:14 in the third (after skating 18:30 over the first two periods, he was said in the post game radio show to have suffered a “stinger” and is day-to-day), but Alzner did just fine with the additional time, especially when you consider that his last shift was 1:24 and was the last shift of the game with the Islanders having pulled Roloson for an extra skater.

-- We might have thought that the Caps would be “plus-2” on special teams by now, that being the product of its scoring a ton of power play goals and struggling to keep the puck out of their own net when down a man. We would not have thought it would be a product of allowing no power play goals, yet getting only two of their own. Getting one tonight can be thought of as “baby steps” for the power play. The one they got wasn’t pretty, but it counts in the power play rankings (and the Caps jumped to 19th in the league with the one they got tonight).

In the end, two points is two points. I can’t fault the Caps for effort. The Islanders are set up to make their opponent look inelegant at best, bad at worst. You’re going to have to play the whole 200 feet against that team. And in that respect, this was an encouraging win. The Caps got down and ground one out when the very nature of the game the Islanders play argues against skill having a free hand. And it doesn’t hurt to have a goalie who seems to be getting better and more comfortable by the game. But his test is coming. Three wins at home, a loss on the road. With the Caps going on the road for five of their next seven games to close the month, we’ll see if Michal Neuvirth can duplicate the magic he weaves in a red sweater when he dons the white one.
Posted by The Peerless at 12:34 AM 4 comments: