The Peerless Prognosticator is ON THE AIR!!! -- Game 28: Capitals at Lightning, December 12th

The Washington Capitals played what was arguably their worst game in five weeks when they dropped a 4-1 decision to the Florida Panthers in the first leg of their three-game road trip.  Not since the Caps lost in New York to the Rangers, 5-2, on November 3rd did the Caps look as disorganized as they did against the Panthers on Thursday night.  Worse, they did it with many fathers and mentors of players in attendance.

The Caps get a chance to redeem themselves and put a smile on their elders’ faces on Saturday night when the Caps complete the Florida portion of their road trip with a game in Tampa against the Lightning at Amalie Arena.

This will be the second meeting of the clubs this season and first in Florida.  Washington defeated the Lightning, 4-2, on November 27th at Verizon Center.  Since that meeting, the teams have traveled similar paths…

If anything, the recent record of the Caps is a bit of a slowdown from their 16-5-1 start, but it is still among the fastest starts in club history. On the other hand, the 3-2-0 record for the Lightning is just more of what they had been doing to start the season.  The Lightning does have two three-game winning streaks this season, but they have been hard pressed to generate any sense of momentum.  It does not even seem to matter whether they have done it at home or on the road, the lurching, stumbling progress has been the same – 7-5-1 at home (19th-ranked home ice record) and 7-7-0 on the road (12th).

The Lightning have not been especially productive in the offensive end of the ice in the five games since they faced the Caps.  With all due respects to the players involved, if J.T. Brown is tied for the points lead (1-3-4), Brian Boyle (2) and Nikita Kucherov (4) are the only players with more than one goal, and the guy you expect to be the leader in scoring goals has none in his last seven games and two in his last 11, this is not a mix conducive to long term success.

Which brings us to “the triplets.”  Last year, Kucherov, Tyler Johnson, and Ondrej Palat made quite a trio, accounting for 74 goals as a group.  Their possession numbers as a group was just about as good (53 percent).  Kucherov has certainly contributed from the right side  recently and has ten goals for the season (second to Stamkos’ 11).  Johnson and Palat, however, are not having quite the same impact as Kucherov or even as they had last season.  Johnson has four goals in 23 games, although all of them have come in his last 11 games.  He has missed a number of games this season to an upper body injury.  Palat has two goals in 17 games and just returned to the lineup on December 10th after missing three weeks with a lower body injury.  As a group, these three players have eight career goals against the Caps in 19 games.

There might be a fair amount of talk as the season unfold whether Henrik Lundqvist, Carey Price, Marc-Andre Fleury, or even Braden Holtby should be given consideration for the Vezina Trophy.  Here is another name – Ben Bishop.  While the four goalies mentioned have certainly had fine starts to the season (or at least while healthy in the case of Price), Bishop is second in the league in goals against average (1.95; minimum: 750 minutes) and fourth in save percentage (.931).  He has gone 15 straight appearances without having allowed more than two goals in consecutive games (7-6-1, 1.59, .944, one shutout).  What is amazing is that in that run he lost five games in regulation when allowing two or fewer goals.  Bishop is 1-4-1, 3.96, .884 in seven career appearances against the Caps. 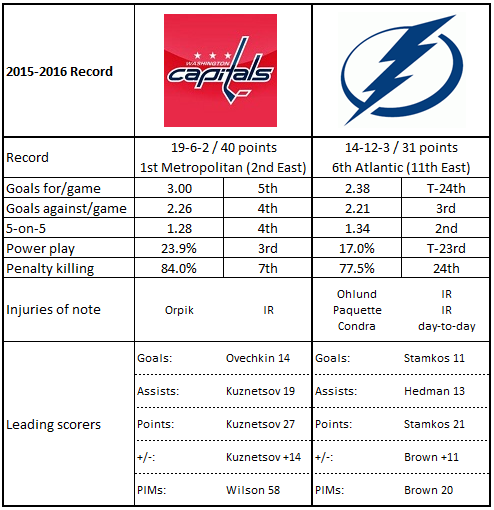 4.  The Lightning might beat teams, but they don’t beat them up.  Only Toronto has fewer fighting majors this season (1) than Tampa Bay (2).

2.  One thing you can probably count on is that the winner of this game will be the team going to the locker room at the second intermission with a lead.  There are seven teams with perfect records when leading after 40 minutes, and the Caps and Lightning represent two of them.  Only the New York Rangers have more wins in those situations (13-0-0) than the Caps (12-0-0).

4.  No Capitals defenseman appears in the top-50 of goals allowed/on-ice.  Matt Niskanen is tied for 56th with being on ice for only 26 goals against.

The Internet forgets nothing.  And when one of the most prolific goal scorers of his era “likes” a "tweet" about the possibility of his leaving his current employer for another (who happens to reside in his hometown), people will take notice.  Steven Stamkos is not having a banner year so far (11 goals in 29 games), and this cannot help.  He is on an oh-fer over his last seven games on just 13 shots.  While he is one of the most efficient shooters in the league (17.1 percent for his career), he is on a pace to finish with his lowest shot total (204) of any full season in which he played since his rookie year in 2008-2009 (181 in 79 games).  Stamkos is 14-13-27, minus-14, in 33 career games against Washington.

It would seem likely that it will be largely up to Braden Holtby to keep the Caps’ record intact of not having lost consecutive games this season.  And frankly, this will be a challenge.  In four games following relief from Philipp Grubauer this season, Holtby is 2-2-0, 2.75, .889.  Almost half of the 11 goals he allowed in those four games came in the 5-2 loss to the Rangers on November 3rd, and he does have a good save percentage in the other three games (.922), but it might be something that bears watching in this game.  Holtby is 6-2-1, 3.10, .904, with one shutout in 10 career appearances against the Lightning, including a 32-save effort in a 4-2 win against Tampa Bay on November 27th.

This is really pretty simple.  That Florida game?

If they don’t, they will be just fine. 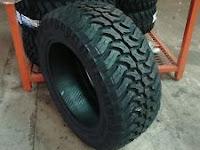 The Peerless is a bit under the weather, so Cheerless is going to weigh in with a few observations from the Washington Capitals’ 4-1 loss to the Florida Panthers last night...

-- That Jagr is somethin’, isn’t he?  Just 21 seconds in, and he went all “Penguins” on the Caps, knocking a puck out of mid-air past Philipp Grubauer.  He’s got 31 career goals against the Caps now.  That’s second among active players.  Vincent Lecavalier has 35 against Washington.

-- And maybe I’m just all wrong about this, but wasn’t Grubauer supposed to be an upgrade from Justin Peters as the backup goalie?  That’s three games in four that he’s allowed three or more goals, and he’s got a goals against average of 2.79 and a save percentage is .896.  Okay, he is an upgrade (Peters was 2.98/.882 after five games last season), and not all goals are goalies’ fault (like that Jagr one or the 2-on-1 that Aaron Ekblad scored on), but is he all that much of one right now?

-- Six power plays against?  That’s five or more in two of their last three games.  Maybe not a coincidence, but they also allowed power plays in those two games.  Frankly, the PK leaves something to be desired these days.  It’s 20-for-25 in the last nine games.  Not bad (80.0 percent), but not the top-five group it was a little while ago, either.

-- Tom Wilson had no penalty minutes in his first six games this season and only eight in his first 12 games.  With 15 minutes last night (and is there a call from the league coming?), he has 50 PIMs in his last 15 games.  He is now fourth in the league in penalty minutes.  Not sure this is the chart he should be climbing.

-- And speaking of penalties…Alex Ovechkin – two penalties, one hit.  Odd result.  At least he didn’t get hit for ticky-tack calls.  A high-sticking and a cross-checking.

-- It’s not as if they made Al Montoya work for his win in goal for the Panthers.  The Caps had just 21 shots on goal, only four in the last 20:57 of the game.  More than half of them came from Ovechkin (5), Evgeny Kuznetsov (4) and T.J. Oshie (3). Five of the forwards (Jason Chimera, Tom Wilson, Michael Latta, Jay Beagle, and Marcus Johansson) had none.  Geez, guys…even the new guy, Chris Brown, had a shot on goal, and he played less than eight minutes.

-- Chimera and Taylor Chorney were the only Caps not credited with a hit.  Angry hockey is apparently not successful hockey.

-- That was the first time in more than a month that the Caps allowed four or more goals.  They had gone 15 straight games not doing so since they lost a 5-2 decision to the New York Rangers back on November 3rd.

-- The power play was 0-for-5.  That is the first time this season that the Caps had five or more power plays and failed to convert any of them.

As Peerless might say, in the end… they stunk.  The dads deserved better.  But hey, not every game is moonshine and moonbeams.