The longest week of the season to date for the Washington Capitals was the best one to date.  The Caps had their first clean week since Week 2 and ended it by tying their longest winning streak of the season.  It truly was a week for Capitals fans to give thanks. 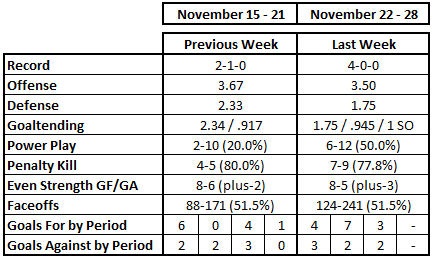 The Caps went into Week 7 having split the first two games of their season-long five-game home stand.  Their last three games of that stand would be against three teams of different pedigree.  There were the young and speedy Edmonton Oilers, there were the tough and gritty Winnipeg Jets, and there were the deep and experienced Tampa Bay Lightning.  The Caps amply demonstrated that they have the capacity to play effectively against such a range of styles, posting a shutout and two two-goal wins over the three teams.  Then, to cap things off in a holiday week to celebrate, the Caps visited Toronto to wrap up a back-to-back set of games (playing Tampa Bay the previous night) and pulling away from the Toronto Maple Leafs with another two-goal win. 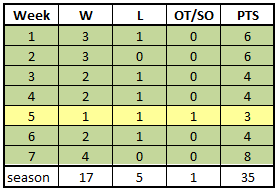 The Caps had trouble finding their stride in Week 7, held without a goal on 15 shots over two periods against the Edmonton Oilers and goalie Anders Nilsson in the first game of the week.  However, the Caps then scored 14 goals in their next nine periods.

The Caps spread things around, too.  Nine different players recorded goals for the week, five of them recording a pair – Dmitry Orlov, Alex Ovechkin, Justin Williams, Marcus Johansson, and Jason Chimera.  There were 14 players who finished the week with points, led by Evgeny Kuznetsov (1-4-5) and John Carlson (0-5-5).  What is noteworthy about the first two sentences in this paragraph is that no player’s name appears more than once.  Balance.

The Caps finished the week with three two-goal wins, giving them 11 multi-goal wins this season.  That ranks third in the league behind the Montreal Canadiens (15) and the Dallas Stars (12).  Their winning percentage in such games (.786) is second only to the Canadiens (.882).

The Caps spent the first six weeks of the season cultivating a reputation for being stingy with shots and shot attempts.  That reputation would be challenged in Week 7 against teams that, whatever their defensive issues, could score goals.  The Caps did allow the Edmonton Oilers to break the 30-shot barrier in the first game of the week, just the third time in 20 games any team recorded more than 30 shots against Washington.  After holding the Winnipeg Jets in check – 26 shots against in a 5-3 win – the Caps allowed more than 30 shot in consecutive games for the first time this season, 34 to each of the Tampa Bay Lightning and the Toronto Maple Leafs.

Here is the odd thing about Week 7, though.  The Caps had what for them was a poor possession week.  Well, perhaps inconsistent.  Their Corsi-values at 5-on-5 overall (47.7 percent) and in close score situations (47.3) were a departure from their highly ranked possession numbers going into the week.  Their score-adjusted values (50.0 percent) were not poor, but certainly not up to their standard over the first six weeks.  What made it especially out of character was that the worst game of the week was against perhaps the weakest team overall – Edmonton.  The Caps’ 44.7 percent score-adjusted Corsi in that game was their second-worst game of the season (November 20th at Detroit: 43.2) and worst at home this season (numbers from war-on-ice.com).

Holtby was more efficient as games went on.  His save percentages by period were .932 in the first periods of games, .938 in the second period, and .961 in the third period of games.  The only two third period goals he allowed on a total of 51 shots faced came in a game the Caps led, 4-0.  Holtby had a typically fine week overall. At week’s end, he was ranked highly in a variety of categories (minimum: 500 minutes):

The Caps had their best week of the year on the power play in Week 7, both in goals scored (six) and efficiency (50.0 percent).  They did it with something old and something new.  The old was Alex Ovechkin, who recorded a pair of goals with the man advantage, his second and third power play goals of the season.  Ovechkin had been shooting in bad luck, recording only one power play goal on 33 shots (3.0 percent) entering Week 7.  He finished the week 2-for-11 (18.2 percent), much more in line with his career shooting percentage (14.6 percent) on the power play.

The new was Jason Chimera, who had a hand in half the team’s power play goals in Week 7 (1-2-3).  He doubled his power play point total for the season and has set a personal best in that category, his six points (3-3-6) surpassing his previous career best of five points, set twice.  Chimera is now fourth on the team in power play scoring, his six points trailing only Nicklas Backstrom (9), John Carlson (9), and Evgeny Kuznetsov (7).

Overall, the highlight was the Caps lighting up the Lightning for three power play goals on 11 shots on four power plays.  It was the highest power play goal total for a game this season to date and their highest since scoring three on four chances in a 5-4 Gimmick loss to Montreal last April 2nd.  The last time they had more power play goals in a game was November 5, 2013, when they had four in six chances in a 6-2 win over the New York Islanders. 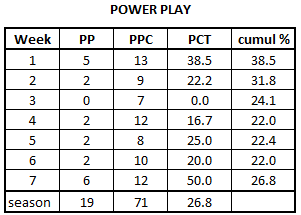 The penalty killers have slipped a bit of late.  After posting an 85.7 percent efficiency rate in Week 5, Washington has dropped in each of the last two weeks, a 77.8 percent rate in Week 7.  In fact, over the last four weeks the penalty killers are 21-for-27 (77.8 percent).  This week the key was holding down the opportunities.  Three times in four games they faced just two shorthanded situations.  Unfortunately, they allowed goals in two of those games.

The thing is, the penalty killing was not as bad as the outcomes suggest.  They penalty killers did a good job of keeping puck from getting to the net, allowing only ten shots in 13:06 of ice time (0.76 shots per minute). 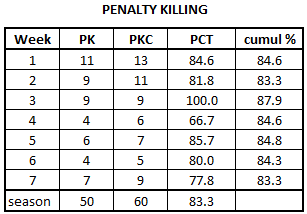 The bedrock number one might point to in terms of outcomes as the basis for success is winning the even-strength goal scoring battle.  The Caps won three of the games in that regard in Week 7, losing only the third game of the week when they allowed two even strength goals to Tampa Bay, scoring one of their own.  Only three teams have scored more 5-on-5 goals this season than the 47 such goals the Caps have (Dallas, Montreal, the Rangers).  If there is an odd number here it is that Alex Ovechkin did not record an even strength goal for the week.  Nevertheless, he finished Week 7 having scored more 5-on-5 goals than any player in the league (9; minimum: 250 minutes).

It was a good week overall for the Caps in the circle, but as happens with such things at an individual game level, it was up and down.  The Caps alternated winning and losing games in the circle; their offensive and defensive end performances being almost mirror images of one another.

Washington won the faceoff contest against Edmonton (58.5 percent) and Tampa Bay (55.4 percent) while losing it to Winnipeg (42.6 percent) and Toronto (48.3 percent).  The problem was not in the offensive zone, where the Caps won 46 of 81 draws for the week (56.8 percent) and did 50 percent or better in all four games.  Nor was it in the neutral zone, where Washington went 40-for-73 (54.8 percent) and also did 50 percent or better in all four games.  The defensive end was another story.  The Caps managed only one 50-plus percent performance for the week in their own end and won just 38 of 87 draws overall (43.7 percent).

Four Caps had more than 20 faceoffs for the week and three of them finished at or over 50 percent – Nicklas Backstrom (50.0), Jay Beagle (55.8), and Evgeny Kuznetsov (55.2).  Only Michael Latta finished under 50 percent (39.1 percent) an uncharacteristically low percentage of wins for a player who entered the week winning 58.5 percent of his draws. 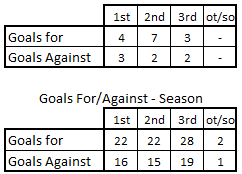 The Caps won every period of the week overall.  In fact, at the individual level they only lost one period, that being the third period of their 4-2 win over Tampa Bay when they Caps were outscored, 2-1.  By period, their record was 6-1-5.  If nothing else, it is a reflection of the Capitals’ consistent effectiveness, their ability to beat or hold teams even on a period-to-period, game-to-game basis.

Weeks do not get better than this often for teams at this level of play, even very good ones.  The perfect week catapulted the Caps to the top of the Metropolitan Division, one point ahead of the New York Rangers, who have lost three in a row and over whom the Caps hold a game in hand.  They have the second-best record in the Eastern Conference and are within the games in hand held over the Montreal Canadiens of tying the Habs (four point deficit, two games in hand).

The Caps did it in Week 7 with balance and an opportunistic bent.  They spread the points around, stepped up on the power play when the even strength scoring lagged a bit, and got superb goaltending from Braden Holtby.  It has been the formula for success all season.