Another winning week goes into the books for the Washington Capitals.  With four winning weeks in a row to start the season, the Caps have six winning weeks in the regular season in a row going back to last season.  That six-week streak matches their longest string of winning weeks from last season as well (Weeks 9-14 with a 12-2-4 record).  It is what is becoming a slow and sure path for the Caps to the upper reaches of the league standings. 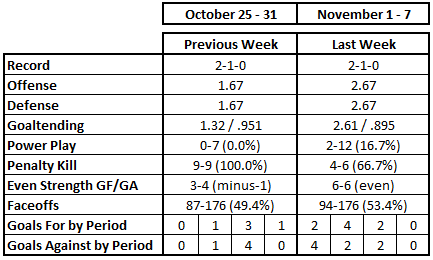 It was the second consecutive 2-1-0 week for the Caps and the second consecutive week that they finished the week with two wins after dropping the first game of the week.  This week it was a sub-par effort against the New York Rangers at Madison Square Garden, where the Caps came up short, 5-2.  They rebounded with a solid win over the Boston Bruins on Thursday, 4-1, then escaped what might have been an embarrassing loss by scoring with less than a second left in regulation, then winning in the Gimmick over a game Toronto Maple Leaf squad, 3-2.  At week’s end, the Caps were fourth in the league in standings points earned per game (1.54), behind only the Rangers (1.57), the Dallas Stars (1.57) and the Montreal Canadiens (1.69).

Week 4 was one on which the Caps struggled a bit on offense.  They managed only seven goals against goaltenders (one empty netter), three against a team – Boston – with a struggling goaltender in Tuukka Rask.  They were 5-for-79 shooting at even strength against goalies at even strength for the week (6.3 percent).  Take away Alex Ovechkin’s 2-for-16 shooting, and that goes to 3-for-63 for the rest of the team (4.8 percent).

Ovechkin and Justin Williams led the Caps in points for the week, all of Ovechkin’s points coming on goals, all of Williams’ on assists.  The last of Ovechkin’s goals for the week tied him with Sergei Fedorov for the most goals scored by a Russian in NHL history (483).  Williams’ three assists extended his points streak to five games overall.

Speaking of Williams, he is one of a pack of Capitals at the top of the Corsi-for rankings at even strength for the season (numbers from war-on-ice.com; minimum 100 minutes at 5-on-5):

It might have been a very good week at the other end of the ice but for that loss against the Rangers.  New York scored four goals in their 5-2 win before the game was 27 minutes old, ending the competitive portion of that contest fairly early.  It was one of those speed bumps that one must negotiate over the course of a season.  The Caps permitted only four more goals over the rest of the week.  More to the point of defense, the Caps continued to limit opportunities for opponents.  They allowed only 76 shots on goal for the week.  They have not permitted a team to record more than 30 shots in a game since San Jose finished with 32 in the Sharks’ 5-0 win over the Caps in Game 2 of the season.  They finished the week having allowed the fewest shots on goal in the league per game (25.2).

The possession numbers were a bit of a mixed bag..  Overall, the Caps were well to the good in Corsi-for percentage at 5-on-5 (56.3).  The score-adjusted value was not much different (54.9).  However, the close-score value (49.6) did not keep pace, and that was a product of a poor result against, of all teams, the Boston Bruins, who the Caps defeated, 4-1.  The Caps also lagged in close score Corsi against the Rangers, just getting to 50.0 percent although, given the nature of the scoring in that game, there were far fewer close score events (28) than there were against either Boston (51) or Toronto (58; all numbers from war-on-ice.com).

Braden Holtby got all the minutes in Week 4, and it looked a lot like Week 3.  He started with a loss to the Rangers, as he did in starting Week 3 with a loss to the Pittsburgh Penguins, then followed it up allowing a single goal against Boston, as he did against Columbus in Week 3.  Against the Rangers, Holtby allowed four goals on the first 11 shots he faced, then he finished the week allowing only four goals on 65 shots (a .938 save percentage).

First periods were a bit of a problem for Holtby in Week 4.  He was 24-for-28 (.857 save percentage) for the week.  He was better as games went on.  Even with the two goals on the first two shots he faced against the Rangers in the second period of the opening game of the week, he was 22-for-24 in the second periods of games (.917).  He was also 22-for 24 in the third period and overtime of games.  It certainly was not among his better weeks this season, but he made it respectable after a poor start.

Well, they scored.  After going four straight games without a power play goal, including the first game of Week 4, the Caps scored a power play goal in each of the last two games of the week.  The goal that broke the drought was one of the prettier power play goals the Caps have had recently – courtesy of John Carlson.  It was a play that showed some imagination in addressing the lack of punch and in how to use a weapon as a decoy of sorts.

The other power play goal for the week was the product of a skill one does not normally speak of often with respect to Alex Ovechkin, and that is touch.  It was a case of being the target of a set play, but having the plan altered a bit when a pass through the crease was interrupted just enough to alter the path of the puck.  Instead of taking the pass on his forehand for a one-timer, Ovechkin had to switch to taking it on his backhand and having the touch to flip it from a bad angle past Toronto goalie James Reimer for what would be his record-tying goal for the week.

Still, there are things to work out on the power play.  The 2-for-12 overall effort same from scoring two goals on 16 shots in 20:00 of power play time (0.80 shots per minute).  The frustrating part of the week on the man advantage was the Caps failing to score on a 61-second 5-on-3 power play in the third period of their game against Toronto, getting only one shot in the process. 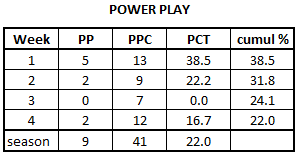 The Caps came into Week 4 as one of the better penalty killing teams in the league, and they ended the week in the same position, just a little less better.  The best part of the week was having to kill off only six shorthanded situations. This continued a pleasant trend for the Caps, facing fewer and fewer shorthanded situations on a week-to-week basis (see the table below).

The good was balanced from the bad, though, and a 66.7 percent kill rate on penalties cannot be considered good.  Part of it might be considered a bit of bad luck.  The second of the two power play goals of the week the Caps allowed came from one of those bounces that seem to define the sport.  Toronto’s Morgan Rielly feathered a pass into the middle for a redirection try by Joffrey Lupul.  He got his stick on the puck but redirected the puck into the far post instead of into the net.  The puck rebounded off the post right onto the stick of James van Riemsdyk, who had more or less an open net into which he could flip the puck.  As it was, the Caps did a good job of denying shots.  They allowed the two goals on only six shots in 11:07 of penalty killing time (0.54 shots per minute).

It looks worse than it was.  The Caps were outscored, 5-1, at evens against the New York Rangers to start the week.  That’s getting all the “bad” out of the way early.  But it was not all unicorns and accordions, either.  It would not have been an “even” week but for some equal parts persistence and luck in the dying moments of the Caps’ third game of the week when Nicklas Backstrom scored in the last second to tie their contest with the Toronto Maple Leafs.  The goal was scored with the goalie pulled and the Caps with six attackers, but it is scored as an “even strength” goal.

A thing to note about the goal by Backstrom.  It was credited as being scored with 0.8 seconds left in regulation.  It was not the latest game-tying/game-winning goal in team history.  Calle Johansson scored with 0.2 seconds left in overtime against the Phoenix Coyotes at Verizon Center on January 28, 2000 in a 3-2 win. 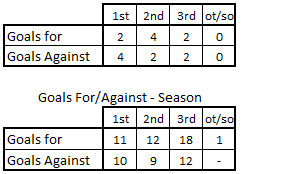 There was nothing especially extraordinary overall about the timing of goal scoring, for or against, in Week 4.  One would like to see better starts – the Caps allowed first period goals in all four games, two against the Rangers.  The good part was not allowing an even strength goal in either of the last two third periods of games of the week.

The Caps still have a knack for goals late, evidenced by the dramatic last second Backstrom goal against Toronto.  Keeping even for the week, with two goals for and two against, the Caps finished the week with 18 third period goals scored, tied for second most in the league with the Dallas Stars.  Their plus-6 in the third period is fourth-best in the league.

Slow and sure wins the race.  The Caps do have a five-game winning streak on their record this season, but the first four weeks of the season look more like a portrait of consistency.  The odd stinker of a game sneaks in, such as that against the Rangers to open the week, but the Caps have been able to limit the damage.  They have done that largely by being stingy with respect to allowing teams to generate shots.

At the other end, the Caps were not touching off fireworks, but they did have balance.  Six players share the eight goals for the week, 12 players recorded points.  Five players have surpassed the double-digit threshold in points, and every skater that has appeared in more than five games has recorded at least one point (19 in all).  The Caps are doing enough things consistently well to build their total of standings points at a regular pace as a result.

It is something to hold on to as the Caps embark on Week 5.  They will head to the road to face Detroit, a team that has just a 3-3-0 record at home so far.  Then it will be on to Philadelphia and very possibly meeting an old friend.  Michal Neuvirth has three wins for the Flyers in goal this season, all of them shutouts.  He leads the league in shutouts at the moment.  The Caps will return home to finish Week 5 against the Calgary Flames, the first time the Caps will face a club for the second time this season.  They won their first meeting, 6-2, in Calgary back on October 20th.  The Flames are playing a bit better than they were back then, heading into the new week with a two straight wins.  It makes for an interesting week after a successful one.