The Peerless Prognosticator is ON THE AIR!!! -- Caps vs. Sabres, November 25th

It’s Turkey Week. No, we’re not referring to the Caps’ 1-2-2 record in their last five games. We’re referring to that most American of holidays, Thanksgiving, where families gather around the table to give thanks for the NFL Network. And The Peerless is no different. We’ll be gathering around the table with our cousins to share in this year’s bounty, which, as you might imagine, is a little different than what you might usually find on a Turkey Day table.

Cheerless... I thought you’d be getting ready for Thanksgiving.

“I was, but that dang fool Fearless decided he was going to cook dinner, and he told me t’git out and take my can o’ turkey Spam with me.”

You weren’t planning on having turkey Spam, were you?

“Well, there’s sweet-taters fried up in raccoon fat with marshmallow fluff. And then there’s sugar-baked groundhog with maple surrp. Oh, an’ there’s critter-stuffed taters with turnips.”

“Yeah, we always has a surprise dish for the kids. An’ we got kettle cooked owl mush with pickled biscuits, an’ fer dessert, sugar-baked woodpecker pudding with oiled-up huckleberry…”

“That’s what I said, but he said we needed to have a so-fisteecated Thanksgiving."

And what’s his idea of a menu?

Well that doesn’t sound so bad.

“Oh, and what’s with ‘wood-fired’ roasted baby turnips with rosemary and fennel fronds?... wood fired? Ain’t that how we cook all our meals? Out back on a wood fire? And what the $#@% is a ‘frond?!’”

“And can somebody tell me what ‘brined tofu and razor clam dressing’ is?” 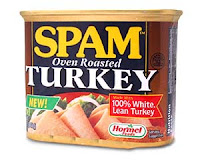 You still got that can of turkey Spam?

Before we sit down with a can opener and a fork to celebrate the holiday, there is hockey yet to be played. And tonight it will be the Caps and the Buffalo Sabres in the annual Turkey Day Eve game at Verizon Center. The Caps come home limping, 1-2-2 in their last five games. It’s not as if the Sabres are lighting up the league either, as they visit DC having lost their last three games (0-2-1), giving up six goals to Florida and five to Ottawa in doing so. This could be a contest of the resistible force meeting the moveable object. The overall numbers for the two teams look like this… 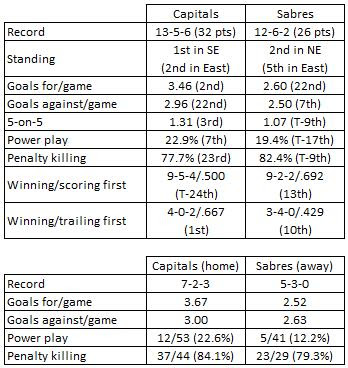 What has been remarkable about the Sabres’ three game slide is that Ryan Miller has been in goal for two of them, giving up seven goals on 49 shots. Still, he tops the NHL leader board in goals against average (1.97) and is second in save percentage (.931). It is a reflection of the amazing start he’s had that he could have a slip in the last two games and maintain such a lofty ranking. He got there by virtue of the fact that in 17 appearances this year he has allowed more than two goals only four times, and he has given up more than three goals only twice. He is 9-3-0, 2.64 in 13 career appearances against the Caps and has allowed two or fewer goals seven times.

Buffalo has struggled with offense lately. The Sabres have not scored more than three goals in a game since October 28th, a span of 11 games and counting. In those games, the Sabres are 5-5-1, cooling off considerable from their 7-1-1 start and putting more pressure on their goaltending. They have been outscored 33-23 in those 11 games.

Thomas Vanek started the season as if he was going to blast past his career high in goals (43 in 2006-2007). He had four in his first five games. Then he went nine games with only one goal to show for it. He does, however, have two in his last four games, but there are a couple of other numbers that are a bit odd and not too flattering. First, Vanek doesn’t have an even-strength goal since October 21st (that was the last in his four-in-five run). Yet he remains the Sabres’ top goal scorer (seven). Second, he is minus-8 in his last five games, a product of being on the ice for 10 of the 17 goals allowed by Buffalo in those five games. In 16 career games against the Caps, he is 6-5-11.

On defense, the story is Tyler Myers. The 12th overall pick in the 2008 draft has played in all 20 games for the Sabres and is tied for sixth on the team in scoring (tops among defensemen). Like many of the Sabres, he has slowed down some recently (0-1-1, minus-3 in his last six games). He remains a rock on the blue line, though, ranking second among defensemen in ice time and having logged more than 20 minutes in 14 straight games dating back to October 21st. He is also tops in goals among Buffalo blueliners, tied with Henrik Tallinder for the top spot in assists, tops in hits, tied for the top spot in blocked shots, and is the tallest defenseman in the league not named “Chara” (6’8”). He is certainly holding his own with 2008 defenseman classmates Drew Doughty, Zach Bogosian, and Luke Schenn (and yes, John Carlson is a member of that class).

1. Turkeys belong on the dinner table. The Caps not only have struggled with results – that 1-2-2 record in their last five games – they’ve played badly in important stretches of games. There have been too many turkeys in this run. They allowed five unanswered goals to New Jersey after getting out to a 2-0 lead. They lost at home to an offensively-challenged Montreal team. They lost to arguably the worst team and the worst goaltender in the league at the time in the Toronto Maple Leafs and Vesa Toskala. They gagged on a 3-1 third period lead in losing to Ottawa, 4-3 in overtime. The Caps probably don’t even want to see turkey on Thursday. They’ve had enough. Certainly their fans have.

If the Caps can put the Sabres on their heels and make them take chances, if Nick and Alex can get some points, if the Caps grow a brain in the third period, they should take home two points. C’mon guys, save the turkey for Thursday.

* We’ll be out for a few days to let the turkey – the Thanksgiving turkey, that is – digest. Have a happy and safe holiday, and we’ll see you in a few days.
Posted by The Peerless at 11:43 PM No comments:

And my heart beats ‘cuz there’s little time to pack,
And there seem to be too many guys to whack,
When we play on nights when games are back-to-back.

This is a season that is compressed because of the long Olympic Games break, which will carve a chunk of the schedule out from February 15th through February 28th. That being the case, back-to-back games will figure prominently this season. Let’s take a look at what has transpired to date…

But one thing you will find that is rather consistent in back-to-back games so far. Those teams who play them have been very successful in the first half of the set. Overall, teams playing back-to-back games are 60-38-15 in the first game of the set. As you might expect, teams are more successful over all if the first game is a home game (22-10-6) then if it is an away game (38-28-9). Here is how the sets breakdown into their four categories overall:

First of all, there haven’t been many home/home back-to-backs played by NHL teams thus far – only nine in 113 total back-to-back sets. And if you think winning that first game of a home/home set gives the home team a big advantage in the second, you would be wrong (but it is a small sample size). Seven times the home team won the first game, and only three times have they completed the sweep. Here is how the home/home sets break down:

Some other tidbits about the home/home sets…

- No team lost both ends of the set in regulation. Only Atlanta failed to get a win out of a set, losing in regulation then in extra time on October 21-22.

- Only two teams lost the first game of a home/home back-to-back. Atlanta and New Jersey. Curiously enough, New Jersey’s loss in a home-home set was to Atlanta on October 16th.

Teams playing one night at home, and then having to travel through the night (or early the next morning) would seem to have the biggest intuitive disadvantage in any of the back-to-back types. You’re tired, you often have to rush out of your building to get to an airplane, check into a hotel, sleep in a strange bed, and then skate 60 minutes in front of a hostile crowd the following night.

Well, it hasn’t been the disadvantage you might have expected. Teams have lost 16 of 29 “second” games in those sets (12 of them in regulation). But as a function of percentage of available standings points won, teams playing home/away sets played to a .517 winning percentage. And it doesn’t appear to matter much whether one wins, loses, or goes to extra time in that home half of the back-to-back. You have a roughly even chance of picking up at least a point in that second game on the road, although you do have slightly higher incidences of taking a loss. Here is how the home away sets break down:

- There have been seven sweeps of the home/away sets. New Jersey is the only club so far to have done it twice, and they accomplished the feat in a single week, winning on November 6-7 (Islanders-at Ottawa) and again on November 11-12 (Anaheim-at Pittsburgh). They came in the midst of an eight-game winning streak for the Devils.

- Four teams dropped both ends of a home-away set in regulation (Buffalo, Carolina, Florida, and Detroit, although the Detroit instance was one of those overseas sets).

Getting home to your own bed and skating on your own ice after getting home from the road matters more than the home/away split, but perhaps not all that much. Teams are 16-15 on a pure win-loss basis in games on their own ice following a night on the road (.565 on a winning percentage of available points basis). It hardly seems to matter whether they won or lost that first game, either, on a win-loss basis. Here is how those games break down so far:

Teams do, however, appear to do somewhat better when winning the first game on the road.

- While losing both ends of a back-to-back was rare in the home/away instances, not so in the away/home version of a split set. It was done seven times by six different teams, Totonto having the dubious honor of having twice endured the result.

- Only one team lost both games in extra time among the away/home sets (Los Angeles).

First, there is the matter of 44 such sets having been played out of a total of 113 (thank you, NHL scheduling). Second, it matters that you win that first game, as the breakdown indicates:

Teams winning that first game of a back-to-back on the road earned at least a standings point in 16 of the 23 second-half games played so far. Lose that first game, whether in regulation or in extra time, and you are going to have to struggle to get any success on the following night. You have only about one chance in four of getting a win in the second game (five wins in 21 chances).

Are there great truths to be divined from this? Probably not. It’s early yet, and the accumulated wear on a team as the season moves on, especially with the compressed schedule this year could raise the bar even further for clubs trying to navigate the back-to-back games they have yet to play. But so far, teams do not appear to be especially burdened, in terms of results, by back-to-back games.
Posted by The Peerless at 5:03 PM No comments: