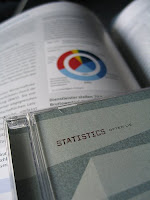 By now you've read a fair number of essays and tables expounding on the matter of what a team's chances are in winning, losing, or splitting games 1 and 2, especially the importance of Game 2.
OK, fine. So...how have the Caps done in their history of frustration and despair in the playoffs in Games 1 and 2, and how has this translated into series won and lost?
Here is how the Caps break down, by Game 1 and Game 2 results, and the number of series wins and losses in each category...
Win Game 1/Win Game 2: 3 series won/3 series lost
W/L: 3-10
L/W: 4-2
L/L: 0-4
If the Caps win Game 2 tomorrow, you'd like their chances, based on their history. But, should they lose...
No pressure guys, eh?
Posted by The Peerless at 12:58 PM No comments:

A Thousand or so Words About the Goaltender

Goaltenders are an odd lot. It is a position that doesn’t have a parallel in any major sport.

In baseball, catchers are probably the closest to that of hockey goaltender, but they participate in – and are expected to contribute to – the offensive side of the game. Goaltenders are (Martin Brodeur notwithstanding) generally disinclined to participate in starting plays, and they are prohibited by the rules from even crossing into offensive territory.

In football, place kickers are the first thing that comes to mind for their unitasking responsibility (kick oblate spheroids between uprights) and for their occasionally off-center personalities. But kickers might step onto the field, at most, a half dozen times a game to display their talents (between kicking extra points and field goals). Goaltenders are expected to stop 30 or more shots a game and might see an opponent attempt 50 or more. And, goaltenders are often identified as the key in big games. We don’t see a lot of ink devoted to Shaun Swisham being the key to the Redskins’ fortunes on any given Sunday. “Important?” Yes…”key?” No.

In basketball, nothing comes to mind that comes close to mirroring the unique characteristics of the position of hockey goaltender. You might stretch things to include a Dennis Rodman when he played in the NBA – a unitasker of a sort with his single-minded talent for rebounding. And, he certainly fit the “off-center” personality thing. But that’s a reach, too, and there isn’t anyone else, or any position, that makes one think, “yeah, that’s like a hockey goaltender.”

The uniqueness of the position sets the hockey goaltender apart, not only from other positions on the ice, but in a sense from his own teammates. It might be the mystery of the position or the lack of a common frame of reference between skaters and goaltenders, but one gets the feeling that in a lot of NHL locker rooms, the goaltender is somehow “different.” No less of a teammate, certainly, but someone whose idiosyncracies, personality quirks, superstitions, and routines might be curiosities and characteristics to be accepted by teammates at a discrete distance.

We suspect this applies to coaches as well. It just seems in reading and listening to coaches in the NHL talk about their own goalies from time to time that they often struggle with just how to relate to their goaltender. And that goes both ways. When Glen Hanlon – a former goaltender himself – was coaching the Caps, and after he was relieved, we remember the occasional quote from former Caps goalie Olaf Kolzig suggesting that Hanlon “got it” with respect to dealing with goalies. Well, we’d expect him to.

What all this is prelude to is that Coach Bruce Boudreau has a big decision facing him before Game 2 on Saturday. He’s been mum about it, even if he’s made it. And that decision is whether to pull Jose Theodore after a disappointing performance in Game 1 in favor of rookie Simeon Varlamov in an effort to improve the performance in goal and perhaps give his team a jolt. When you think of the expectations surrounding this team, the specter of huge disappointment if the Caps should not advance beyond this round, a national television audience watching, and a home crowd getting antsy (already) about their Caps, this has the makings of being the biggest coaching decision in Boudreau’s tenure with the club.

If there is any coach in the NHL who would have to make that decision (Scotty Bowman having retired), I can’t think of one better equipped to make it than Boudreau. He’s seen it all, in every corner of North American hockey. He’s coached teams that exceeded expectations, and he’s coached teams that have perhaps fallen short. He’s been in a 0-1 hole in playoff series before, like the AHL Calder Cup final in 2006, which his Hershey Bears came back to win.

But he still has to contend with the unique nature of the position and psyche of the incumbent holding it when making that decision, because that decision affects both the incumbent (How does he take it? Can he rebound if called back to the ice?) and the replacement (Is he ready? Have we prepared him well enough? Is this the right time?). While he makes that decision for skaters as well, there is the fact that there is only one goaltender (and only one “number one” goaltender, by definition) and all the attention centered on the position.

Game 2 is the most important game the Caps will have played, to date, this year. One could argue it is the most important game they've played since losing a triple-overtime game, and playoff series, to Tampa Bay in 2003. If they lose, they stand only the slimmest of chances of advancing past the first round. And, a good portion of the good will that comes with being the upstart young kids making good could be lost – another in a history of underachieveing outcomes for the Capitals.

Which direction the Caps will take rests largely on the decision on who is in goal tomorrow. This isn’t to say that whatever decision is made, this series will turn into a goaltending duel. We still believe that Henrik Lundqvist is objectively a better goaltender than either of the choices the Caps have. Lundqvist is, in our opinion, one of the top three goaltenders in the league, so he’s going to win a lot of those comparisions.

The goaltender backstopping the Caps has to make all of the saves he should and almost all of them he shouldn’t. For the skaters, their job is not to be so irresponsible or not to lose such focus in their system that they put their goalie in the position of facing the task of making a lot of saves he shouldn’t. That’s on the players to keep this from becoming a goaltending duel.

As for the decision, we suspect Coach Boudreau is going to turn once more to Jose Theodore, a goalie who has shown no small measure of resiliency in coming back from bad performances this year, even against this opponent. We’re not going to be a Monday morning bench coach. We’ll state right now that we think it would be the correct decision.
Posted by The Peerless at 8:08 AM 6 comments: